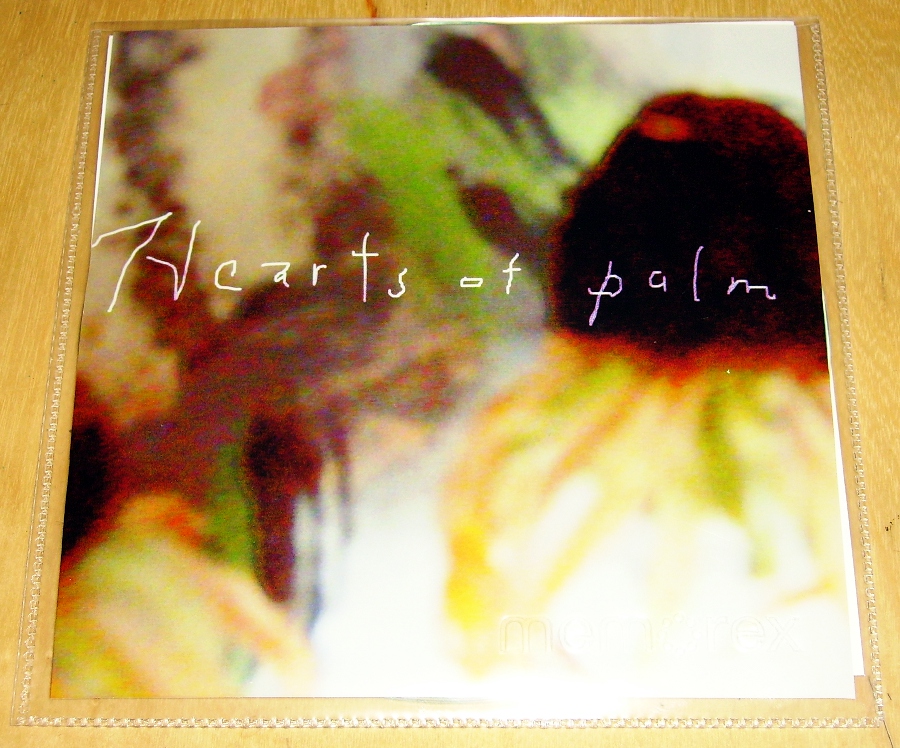 At end of January we received the new CDR from Hearts Of Palm, the beyond-underground team of noise-improvisers based in Cincinnati. ballglovemask (NO NUMBER) exists in a run of just 50 copies and was recorded by the foursome of Chamberlin, Hancock, Renschier and Wilson at a studio in 2009. Outdoing even their own past efforts in terms of opacity and obscurity, these 30 minutes behind the veil represent some of the most remarkable examples of nebulous, lichen-encrusted miasma to have been unleashed to us in the name of home-made kosmische-inspired avant-improv. Impossible to describe much that’s tangible about this insane, layered, cryptical and mystic groaning noise with its eerie non-sounds and its unpredictable percussive bursts; just allow it to envelop you like the shroud of a Saint from above. Hearts Of Palm have now been active for 14 years and as far as I know still remain “unsigned”, not that it would make very much difference if they were otherwise. I think best just to leave them be and let them proceed with their self-appointed tasks and scoop up whatever holy effluvia you can locate with your beady, ring-like fingers. “The group…hopes to record and release several projects this year”, they write in their press. If that boast be true, then keep a watchful orb trained on that myspace page and maintain the PayPal account at a steady level, is my advice.

Another curious item is My Favorite Tics (Z6 RECORDS Z6333666) by The Static Tics, sent to me from the Worm Shop in the Netherlands (an emporium that has been quite supportive of The Sound Projector Music Magazine). The madcap experimenters to credit here are Henk Bakker and Lukas Simonis, both making sport wildly and amusingly with their electronic set-ups, guitar, clarinet, samples, and the treated recordings of voices by visiting guests and friends who may have yapped knowingly or otherwise into concealed microphones. These 19 tracks are mostly gorgeous little fragmented explosions of sweet aural lollipops, most of them pop-song record in length, and all of them cheerfully subvert all our expectations about electro-acoustic music, sampling, and electronic music. The Tic-mongers have been active in their time (at least ten years) producing odd radio plays and audio magazine articles, and I think this CD compiles some of their very first forays into these areas, but is also “surrounded by material from later periods”. It’s massively enjoyable, delirious and puzzling chaos which I heartily recommend, especially to listeners who enjoy the great Vernon & Burns.

From Madrid, we got a copy of Early Summer (CON-V CNVCD 002) by the contemporary French-American composer Wade Matthews, on which he plays back a number of local field recordings made in that part of the world, processing and relaying them through his twin-laptop set-up over loudspeakers; I think what we hear is the document of a live performance of him doing this, hence the subtitle “improvised sound collages”. Among his concerns is an interest in creating collisions, such as inserting small local sounds inside non-matching aural environments. He intends this as an aesthetic version of what everyone nowadays experiences when they play music through their earphones on a bus, unwittingly or otherwise combining string quartet music with the sounds of a bus motor and chatty passengers. He also wants to “play beyond or against memory”, by which he means he wants to explore and discover new combinations and play them back, whether or not they’re guaranteed to work. It’s all part of working against what you’re familiar with, which is good advice for any artist; but also shows Matthews’ commitment to spontaneity, excitement, genuine experimentation, risk-taking. All the above ambitions do show up in the work, but a brief skim has convinced me you need to be playing close attention to catch the multiple timbral inflections in this subtle and precise work. Very good.

Intense durational electronic minimalism on Aurora (PPLCD001) by Kamil Kowalczyk, the first release on his own label Prototyp Produktions. This young Polish-born composer carried out his first sound experiments in the mid-1990s, quite innocently experimenting with tape and cheap keyboards and creating his own brand of noise and drone music, unaware of anyone else’s work at home or abroad. After a few years releasing computer-based music on a netlabel, this is his first piece of tangible product. While Aurora may not be massively inventive music within the context of a genre that already has a fair abundance of exemplars, I have a lot of time for the simplicity and directness of Kowalczyk’s music, its very clean and “pure” delivery, the simple but effective use of high tones and low tones, the unhurried way it sets about advancing its basic structural forms, and the way it sort of envelops the whole body in sub-zero temperatures. It’s like a vast blanket of wool that chills your inner fibre instead of warming you up. If Kowalczyk’s intention on these two long cuts is, as cover art suggest, to send us slowly into the centre of a spiral-formed nebula in blackest deep space, he comes close to delivering on that particular KPI. Keep this alongside your Eleh CDs and albums, and check back in a few months to see which one is winning.