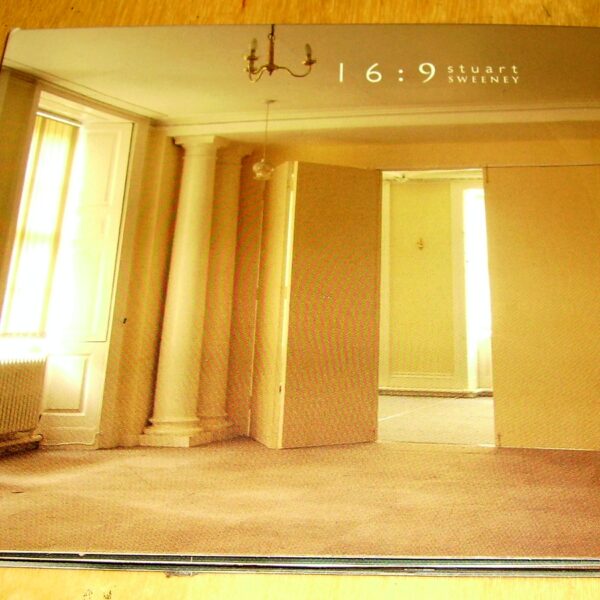 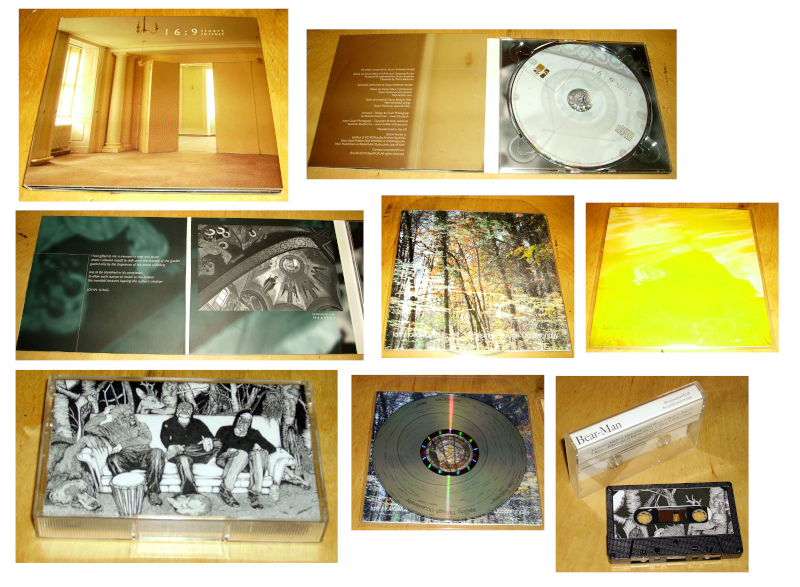 How about these three Cardiff freaks who call themselves Bear-Man and produce a startling and vital jolt using drums, guitar and electronics…self-titled cassette tape of their unkempt live music is Phantomhead Recordings N.18 and the great line drawing cover depicts a fantasy version of the three young players depicted as hairy wildmen or semi-apes seated anxiously on a sofa, said furniture situated conveniently in midst of forest environs with much wildlife (living and stuffed) abounding. Press notes here are keen to stress that Bear-Man situate themselves in the “free improvisation” genre only after much soul-searching and internal debate, and insist on their right to break free of that label and occupy as many musical genres as possible. I’ll endorse that right quicker than you can say ‘Giant Afghan Dancing Owl Boys’, a visionary title which also happens to be the opening track here, and sounds like the result of much cross-fertilising between various marginal strains of performed noise and avant-rock music. What with all the animal rites and ‘Mono Fang’ teeth on offer here, I’m prepared to believe this band are in fact a troupe of semi-rustic Druids with a penchant for animalistic shape-shifting that connects them to their Cro-Magnon roots. Badger dances, deer skins…what sizzles the palate is their wild and super-heated dynamics in the group interaction, the guitar of Simon Jenkins slicing its way into charged air with all the ferocity of a buzzsaw, while Richard Mathias spontaneously generates crazy electronic sounds as surely as if he were siphoning the jet fuel from a passing flying saucer, no doubt found in their ‘Nazi UFO Glade’. Drummer Phil Jenkins hammers out urgent telegraph messages on the snare as though he was the signalman on board the Lusitania. It’s busy, cluttered work, but they all give each other tons of space as well. In all, a splendid burst of vibrant and spiky musical activity which I recommend. For more on the artwork (which happens to be executed by the label owner Ian Watson) see www.uhohwatson.com.

Also from Cardiff, got a couple CDRs from the Phonospheric label. One of ’em is by Ian Holloway, that droning mystic whose work has caused quite an indentation in our soft brain tissue, and here he is with a wispy 37 minutes of airy clutterment entitled Passing Through Occasionally (PHONOSPHERIC THREE), a daytime flight through certain recesses of the mind and decorated with uncanny forest imagery on the cover. Holloway’s got at least two or three layers of music, field recordings and atmospheric debris going down here, spinning like juggler’s plates and all superimposed and cross-folded in a light-filled tableau that is utterly beguiling. Snap into this partial-daydream world when real life weights heavily on thy sternum, and drink deeply at Holloway’s mountain stream. Slowtime (PHONOSPHERIC TWO) is a creation by the label boss Adrian Shenton, beckoning us in with that golden cover that could be a vision of a spectral mountainside. Shenton’s music and track titles confirm he’s one of those dreamers who stands rooted to the spot when besotted by nature’s grandeur, be it a sunset or other natural manifestation of God’s plenty, and takes plenty of time to stop and stare. He mostly creates melodic semi-ambient keyboard one-chord drones that are effective enough, and sometimes combines them with a field recording (e.g. running water), although my favourite moments are the most austere, such as on ‘Possessed By Mountains’, which is a cross between a helicopter ride and a shamanic flight. With economical means, Shenton hints at grand themes and will impress you with his sincerity.

Where Adrian Shenton’s spiritual leanings are implied, they are more discernible on the work of Stuart Sweeney, an English composer whose 16:9 (OOMFF 1001) has many a musical high spot to commend it. I was intrigued here by the cover image of an empty sunlit house, and the digipak opens to reveal more votive imagery in the shape of religious icons on a cathedral ceiling. From what I can gather, Sweeney builds most of his music in his Apple Mac using some home-made percussion, field recordings, and presumably banks of keyboards to create the profound and moving drone music on these 12 cuts, although guest Paul Archer contributes voices and Pete Whitfield plays strings on a couple of tracks. While the press notes hint at cinematic soundtracks and landscaping, I think what we have here is an unashamed romantic composer, creating music with as much Englishness and inspirational content as George Butterworth or Vaughan Williams, which hopefully will come as some relief to those listeners who are getting fed up with abstracted, process-based laptop music that isn’t “about” anything at all other than the means of its own creation. I won’t say this release is an unalloyed triumph, as some cuts are quite routine ambient music and Sweeney’s Achilles heel is his tendency to occasionally lapse into tweeness; but when he’s completely in touch with his angelic muses, then watch out and marvel in his golden glories. And like Shenton above, there is no doubting his sincerity and conviction.