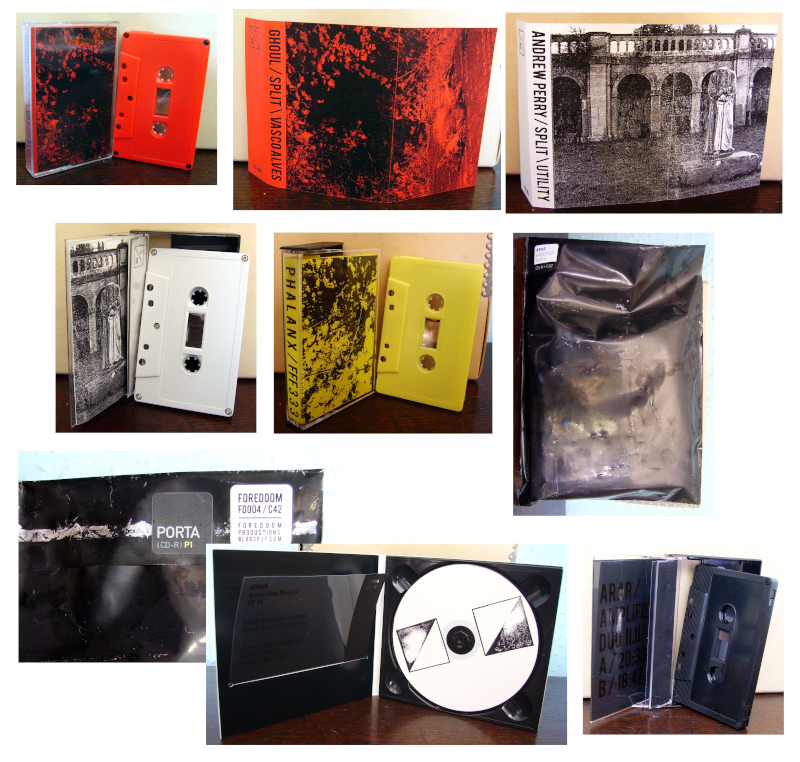 From April 12, received a bundle of items from Foredoom Productions, the first four numbers in the catalogue of this London-based small-run cassette and CDR label. Phalanx gives us FFF333 (FD001), on which he uses synth and voice in a set of “structured improvisations through time-based systems”. Two sides of looped and throbbing electronics are both called ‘Fields Of Rape’ referring to the rapeseed, a popular English crop grown for its oil yield, and the release has a matching yellow colour scheme. Proceeds quite nicely with drooling out its continuous sounds in its sub-Merzbow way, although I confess I’m having trouble extracting the “deeply-embedded” vocal components.

Ghoul and Vasco Alves have a split tape (FD 002) of two quite short pieces, while the cover continues the vaguely pastoral theme with its photograph of a dead fox, and its red colour scheme lets us know we’re in for a hot and hellish time worthy of “Mr Pitchfork”. The Ghoul side ‘Chant’ is highly effective, making use of records of Gregorian chant which are spun and distorted in highly imaginative ways; Ghoul appears to take a very physical (almost violent) approach to his work, wielding the stylus like a dagger and the turntable like the ratchet of a rack. A nightmarish listen emanates from these 15 minutes, which is encouraging given the way that particular source material was so heavily overused on so many sampling records since the 1990s. Vasco Alves’ ‘Female Prophet’ is not quite so direct in its sources, but this very dense and textured composition has its roots in radio transmissions, fed through keyboard set-ups and computer processors. While I enjoy the dynamic movements of this one (it mostly resembles the oral movements of a very sick giant trying to induce vomiting along a huge distended throat), there isn’t quite enough content in the surface sound to satisfy me.

FD 003 is also a split, by Andrew Perry and Utility, and its titles ‘Valour’ and ‘Lines of Force’ hint at the sort of power electronics that Mussolini would have used for teatime listening, and the release is illustrated with a photo of a headless statue suggesting the explosive results of the music’s effects on any given listener. In fact Perry’s ‘Valour’ isn’t really 100% harsh noise but it is extremely busy, a 25-minute assemblage that keeps undercutting its own continuity with many puzzling interruptions and samples of unrecognisable fragments (some of them quite unpleasantly noisy), but the main thrust of it is a jolly entertaining corsage of erratic repetitions and enriched electronic music. With grim determination, Perry drags us on a multi-layered and unstoppable road-trip through the infernal landscapes of an obsessive frotteur. Utility‘s ‘Lines of Force’ is less engaging to me, as I struggle to find any value in the unpleasant electronic tones that seep out of this “degenerative synthesiser workout”; I sense that Utility is relying a little too heavily on the automatic capacities of his machines to play back sequences ad nauseam. It becomes especially insufferable for the latter half of the piece, which is dominated by waves of shapeless static noise. Even so, the idea of “degenerative” music is appealing, and I would urge Utility to follow up on exploring that notion with more conviction for his next release.

FD 004 is Amplified Duo II by ARAR, and comprises a CDR and a cassette in a bag. Both media are presented in stylish jet-black packaging that includes info printed on transparent inserts. Here the team of Louie Rice and Vasco Alves deliver themselves of highly restrained and refined electronic tones, creating 19 minutes of minimal high-pitched whines on the CDR and a further 38 minutes of similar investigations on the tape, which is sometimes punctuated with low crackling, voices, and radio noises. All the work was produced through ‘bandwidth scanning’ of radio transmissions and played in real time alongside oscillating synths. Nothing wrong with this extremely minimalistic approach of theirs, but I find it lacks the concentration and intensity that would make it a truly satisfying listen, even if you push the volume up as high as you can. Still, the blank packaging – the plastic bag feels like something in which a secret agent would receive his sealed orders – is very much attuned to the near-anonymous feel of this music.

The only other comment I would make about these Foredooms is that it would have been helpful to have some way of distinguishing the respective sides of these cassette tapes, which are uniformly left blank. This is rather a drawback, especially when it comes to the split tapes.