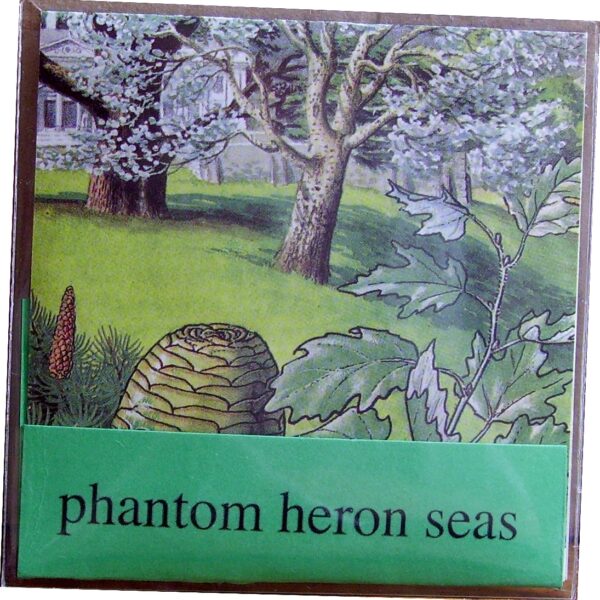 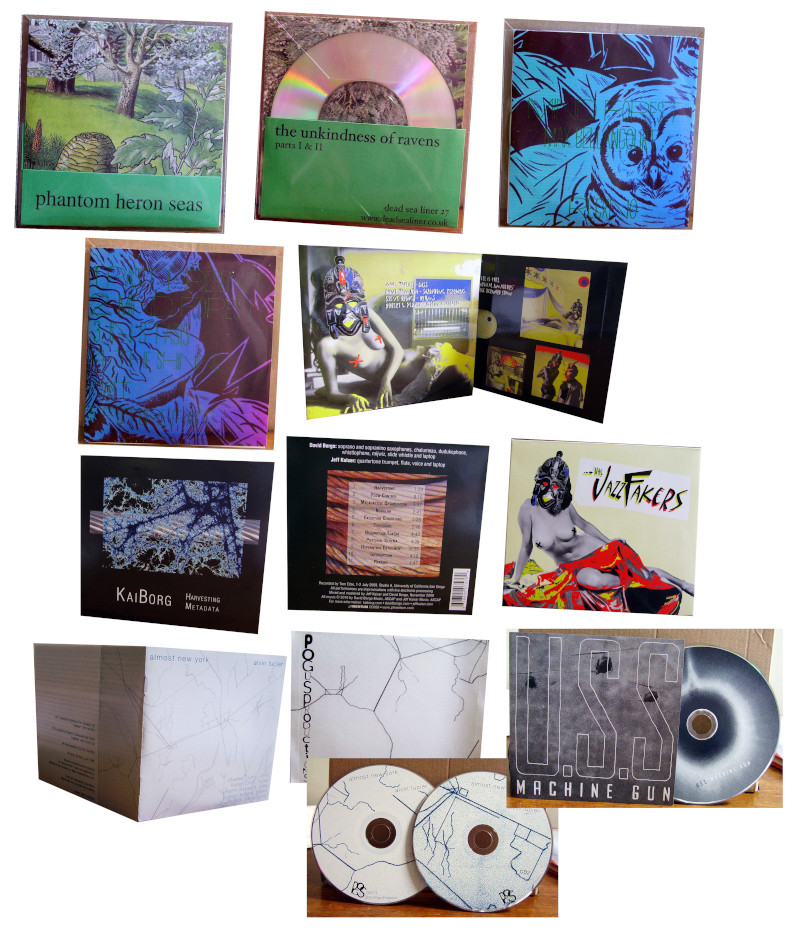 Harvesting Metadata (PFMENTUM CD058) by KaiBorg has been here in the boxes since February. I may have been putting it off since archival metadata is something I have to deal with in my day job, although as a way of managing technical and descriptive terms it may not have much connection to this collection of performed electro-acoustic music, recorded at California in 2009. David Borgo plays a long list of exotic instruments of which only a few names are familiar to me, but they mostly appear to be wind instruments; Jeff Kaiser has his trumpet, flute, and voice and they both use their laptops to do real-time processing of audio and video signals. In places they sound like Evan Parker fighting for his life on board a sailing ship in a heavy storm. At other times it’s a bit quieter, resembling cyborg frogs gulping the day’s news at each other in between darting tongues at passing flies. Quite studious and portentous in approach, but the sounds are exciting and texturally rich. Gotta love the technical-sounding titles they wrap around their work, like ‘Maladaptive Optimization’ and ‘Resumption Tokens’, which may indicate how far IT jargon has advanced at the University of California.

The JazzFakers (NO NUMBER) is a side project of Robert L. Pepper from P.A.S., playing his violin and keyboards with a trio (Isaac Taylor, Steve Orbach, Dave Tamura) to produce some quite entertaining and unusual instrumental tracks on this upbeat album. The word “jazz” is a little misleading as mostly what we hear is straightforward four-square rock beat music with virtually no syncopation, but the melodies are freer and are given an intriguing sheen by the discordant keyboards and electronic swoosh of Pepper and Tamura. Tamura does sometimes add his saxophone to the tunes, either extremely melodic or decidedly skronky, but Pepper’s scrapey violin stabs are the star for me; thankfully he doesn’t see fit to emulate Jean-Luc Ponty in this context.

In March we got a couple of nifty little net-label oddities from Phantom Heron Seas in Dorset. The Unkindness of Ravens (DEAD SEA LINER 27) is presented in two parts on a mini disc, and seems to extend far beyond its allotted twenty minutes as it quietly and confidently paints an endless landscape of great beauty. This is executed with a slowly rising and falling drone, apparently derived from a mandolin, and the surface is greatly enhanced with tiny sonic details that are extremely enticing. This may not be massively innovative as a compositional approach, but the record does have warmth and even spiritual depth. Well worth investigating. The item with the blue owl on the cover is by French artiste Max Bellancourt, who has one record on Dead Sea Liner but his Mind Forest is released by RECKNO. This is five short tracks of quiet sylvan wandering which makes a very appealing record; unhurried, peaceful, and with some pleasant tones being generated in amongst the vague crackly and crumbly field recordings, full of leaf and twig. The long opening track is particularly affecting and makes you afraid to breathe in case you miss something; certainly a nocturnal disk, and it’s not just the owl hooting when I tell you that.

Almost New York (POGUS PRODUCTIONS 2057-2) by Alvin Lucier came out in January. Two discs of quiet minimal music which is astonishing in its spartan and focused discipline, but what else should we expect from one of Lucier’s stature. Well-known as a groundbreaking electronic composer in the 1960s, Lucier increasingly found himself being asked to score music for chamber instruments since the 1980s and liked the challenge of seeing if he could “achieve the same poetry with acoustic instruments”. His approach seems to be to deal in pure sound waves, and by using variant tuning systems among the instruments he can achieve interesting pitch changes. The works here are played on cello, flute, piano, vibraphone – almost the “classic” Morton Feldman set-up. In fact the lovely ‘Twonings’ played by Charles Curtis and Joseph Kubera is like a schematic version of a Feldman composition, if you can imagine something that stripped-down and simplified. While that piece is more mosaic-like with its long stretches of silence in between pointillist decaying notes, ‘Almost New York’ is continuous sound, and uses the flutes of Robert Dick with “slow sweep pure wave oscillators”. A mesmerising proposition I trow – rarely have we heard such “clean” sounding art music. ‘Broken Line’ uses flute, vibraphone (Danny Tunick) and piano for another stately Feldman-esque walk around the vacant loft spaces of a virtual Manhattan, with Dick’s flute glissandoes tracing strange lines in the air. The second disc, not yet heard by me, is devoted to ‘Coda Variations’ played by Robin Hayward on his tuba; the label is justly proud of the “leading new music performers” who have been assembled on this excellent collection.

United Scum Soundclash, or U.S.S., have been going since 2004 and already have released themselves as a v2 as if they were a piece of upgraded software. Maybe they are. U.S.S. is a large-scale conflux of American and Portuguese players put together under the auspices of Jonathan Saldanha and Scott Nydegger, who summon the players from the four corners of the globe using blown conches and everyone assembles somewhere in a big barn to make their heroic large-scale big-band music. In a sense they’re like the Justice League of America, superheroes who didn’t get much done but sat around and discussed things a lot. My alarm bells are usually triggered when I read about “genre-hopping” and “previously unexplored musical realms”, and the long list of players here is also daunting. What they produce is a rather overblown species of free rock played on electric guitars, and it’s very percussion heavy, with some jazzy bursts courtesy of the sax section, plus electronic dabblings from the synths, and bizarre vocalising episodes…on paper it all ought to fail massively, but I kind of like bits of this Machine Gun (SOOPA) release when the loud and sprawling music is juxtaposed with recordings of warfare, gunfire, and radio messages – which is indeed the “theme” of this release, hence the title. Given the grandiose feel of much of the music, and the fact that the players sometimes lapse into a marching beat, it’s hard to tell if this really is an anti-war statement or what. The project’s avowed aim is to “take a cinematic approach to sound”, but then the problem is that their record ends up resembling the soundtrack to films such as Apocalypse Now, Platoon, or Blackhawk Down; a bit of a cliché really.