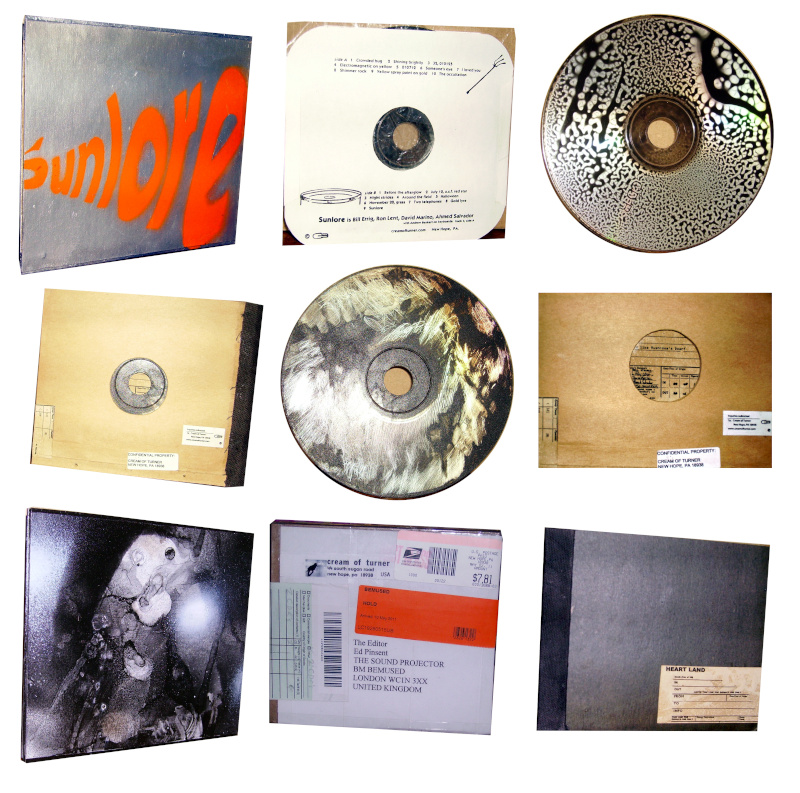 Two highly unusual items from the Cream Of Turner label in Philadelphia which arrived here 10 May. As you can see both CDR releases are housed in gorgeous hand-made packages which have been put together with tremendous care using card, spray paint, chemicals, glue and printed materials, almost as though the maker were building replica LPs for a doll’s house. In fact both Heart Land and Sunlore do exist as vinyl LPs, and David Marino tells me that “our intention [with the CDRs] is to make the listening experience as close to the albums as possible”, and the same packaging materials have been used across the board. At first I thought that no individual bands were credited here (or indeed any personnel), but it is all the work of Marino and his friends using instruments, field recordings and studio effects in any way they see fit, delivering quite intense psychedelic and dreamlike effects.

Heart Land is a sumptuous ride through the craggy hinterlands of a visionary psych-fuelled brain indeed, each track leading us into another dank and sodden tunnel of potent imaginary forces. Never content to settle for a soothing drone, this music pulses and throbs with alien vigour in many pleasing ways, and there is a very strong presence to the recorded sound; while some contemporary records seem to want to distance themselves from the listener, almost hiding behind a sheet of antiseptic glass, the Cream Of Turner aesthetic is much more upfront, analogue, steam-driven, passionate. These sounds stalk you as closely as a friendly 8-foot zombie, whose hot breath you can feel on your neck. Packaged in a plain brown folder with a cloth spine that feels like an old fashioned record album from the 1920s, of the sort that Revenant used to emulate; inside is printed information taken from an old railway signalman’s form. Just managing to stay on the right side of contrivance, the whole object feels like it dropped out of the pocket of a time-traveller’s tweed jacket.

Ah, now I see my error as to the “anonymity” thing as I see that the Sunlore record was made by David Marino, Ron Lent, Bill Errig and Ahmed Salvador. I see this from the little hand-made miniature inner sleeve (complete with rounded corners and plastic liner) which can only have been put together by someone whose love of old vinyl albums has turned into an unstoppable mania; an enlightened soul, in other words. Turns out the same crew, with the addition of Ford Sylvester, also made the Heart Land record. 19 tracks in 35 minutes, and at first spin it seems like these four friendly freaks are trying to re-imagine The Faust Tapes on their own terms, each track a new bold experiment of some sort with little or no connection to its neighbours. Some very nice cosmic guitar noodling, acoustic strumming, avant piano stabs of delicious dissonance, and striding across the floor in the slop of the echo chamber. Some there be who would prolong these semi-improvised episodes and extend them to four sides of a double LP, but what I like about Sunlore is its economy and compression and the fact that the tape machine is turned off, or the session is edited, at just the right moment when your ears crave more. Sunlore certainly fulfils the “phantasmagorical and surrealist” side of their mission statement; even the CDR surface is decorated with a form of decalcomania which bonds it to the catalogue of Max Ernst’s paintings. I’m very tempted to investigate snarfing up vinyl editions of these. Distributed by Tequila Sunrise Records.