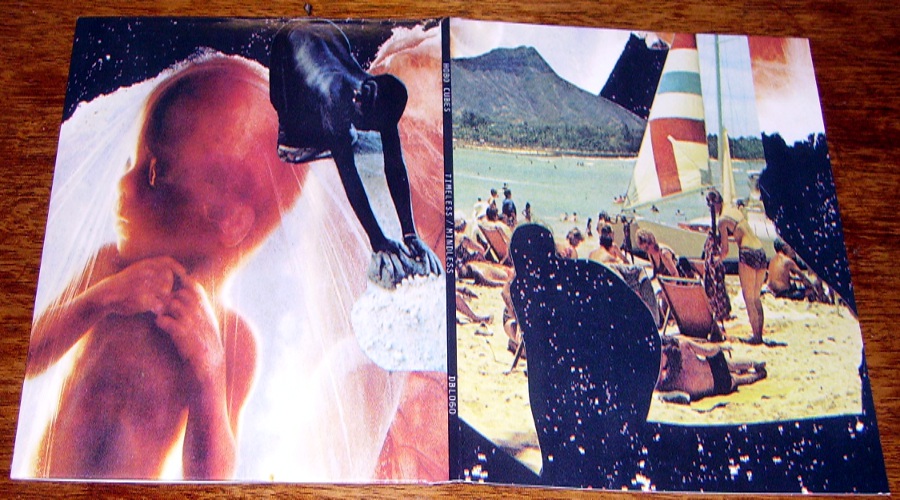 Hobo Cubes is Francesco De Gallo from Montreal whose past work has been represented on the Hobo Cult Records label. On Timeless / Mindless (DEBACLE RECORDS DBL060), his approach to analogue cosmic synth music is winning me over by degrees, somehow making good on the promise of imaginary nostalgia as implied by the cover collages using old magazine photographs. These semi-melodic, not-overprocessed tones have a warmth and simplicity, although the apparent aim of the record is to suggest an imaginary soundtrack to a TV mystery thriller.

DM&P is an improvising trio from Poland. Their Insular Dwarfism (AUDIO TONG ATCD15) is a pretty harrowing mix of saxophones and live electronics, largely atonal music often delivered with an attack and urgency that borders on mental disturbance. While some musicians who blend the sax with analogue synth would like to arrive at a pleasing blend of sounds, this record aims to retain as much sonic antipathy as crude oil and seawater. Slawomir Maler and Philip Palmer operate the sticky valves of the brass section, while Pawel Dziadur mans the engine room equipped with synthesizer, mixing desk, and “wave attack improvisation software”, which sounds like an appliance every home needs. The saxmen may get a little hooty and honky at times, but their voluble tongues need to do all they can to mount a wave of defence against these analogue signals from Planet Mars. A powerful weirdie, this.

More sax with electronics from Triptet with Imaginary Perspective (ENGINE RECORDS e040). Actually the trio of Michael Monhart, Greg Campbell and Tom Baker also deploy a fretless guitar, Tibetan Horns, and a lot of skittery percussion; and their music, while forlorn and ambiguous in tone, is much less angst-ridden than their Polish brethren above. The trio come from Seattle, a beautiful American city whose fog-laden climes I can recommend, and the dank drizzle of that zone seems to seeped into their long tones and mournful blasts, which are rolled along a bumpy road by the fascinatingly uneven drum patterns. Quite some way from the heat of Archie Shepp’s Fire Music, this is a very evocative and contemplative approach to free jazz, and I look forward to exploring this inventive music in more detail. Delighted to learn the trio emerged in 2009 from a Sun Ra tribute band. This release is from Steven Walcott’s small record label based in NYC. Sadly I did not get the chipboard cover, which is a “selling point”.

From same label, we’ve got the Harrison Bankhead Sextet with Morning Sun Harvest Moon (ENGINE RECORDS e039). Led by Chicago bass player Bankhead, this is excellent jazz music from a very versatile combo who seem to be conversant in many styles, from Latin-styled rhythms to outright free-form blowing, even bringing in some ethnic vibes with the didgeridoo on ‘Flying Through Your Dreams’. They’ve got the melodic edge of early Ornette in here too, and the rhythm section has as much syncopation as two marionettes wired up with rubber-band ligaments. The violin of James Sanders really shines for me, and I’m delighted to see a tribute to one of my favourite Afro-American geniuses in ‘A Sketch Of Leroy Jenkins’, a man who for me pretty much defined what free-jazz violin should be. Saxmen Ed Wilkerson and Mars Williams also deliver many a mighty lungful, particularly on ‘Over Under Inside Out’. It may feel like this release is something of a mixed bag of nuts from above description, but it plays well and is energetic and very entertaining.

The team who design the Mort Aux Vaches packages for Staalplaat must work overtime, trying to devise a new approach to packaging with each new release that exploits an unusual packing material in a novelway. The newie by Mark Templeton seems to have had its title burned on the corrugated card fold-out by a specially-manufactured branding iron, while information on the inside is hand-stamped by the chunkiest John Bull printing set known to man. The single 37-minute piece is the live radio set from 2008 by this Canadian sound-artist, and it’s an excellent rondello of dirtied-up piano music, electronic buzzery and loopings that breathes new life into the “glitch” genre. It gets quite symphonic as it progresses, rejoicing in the near-bombast of synthetic orchestral-like layers that is more than a match for Fennesz.