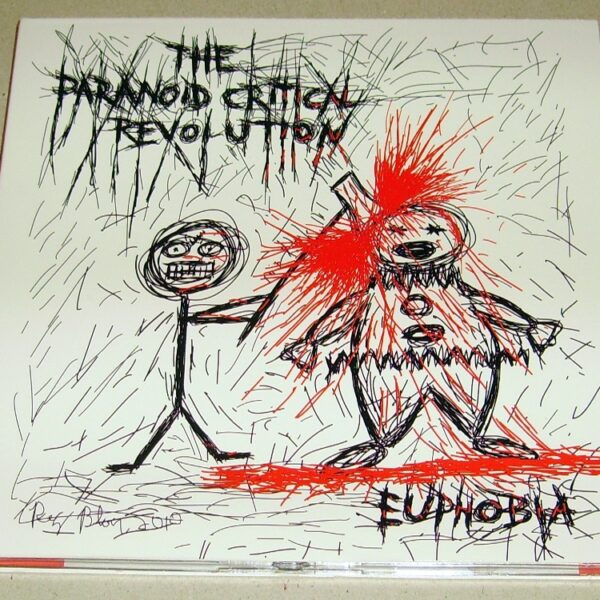 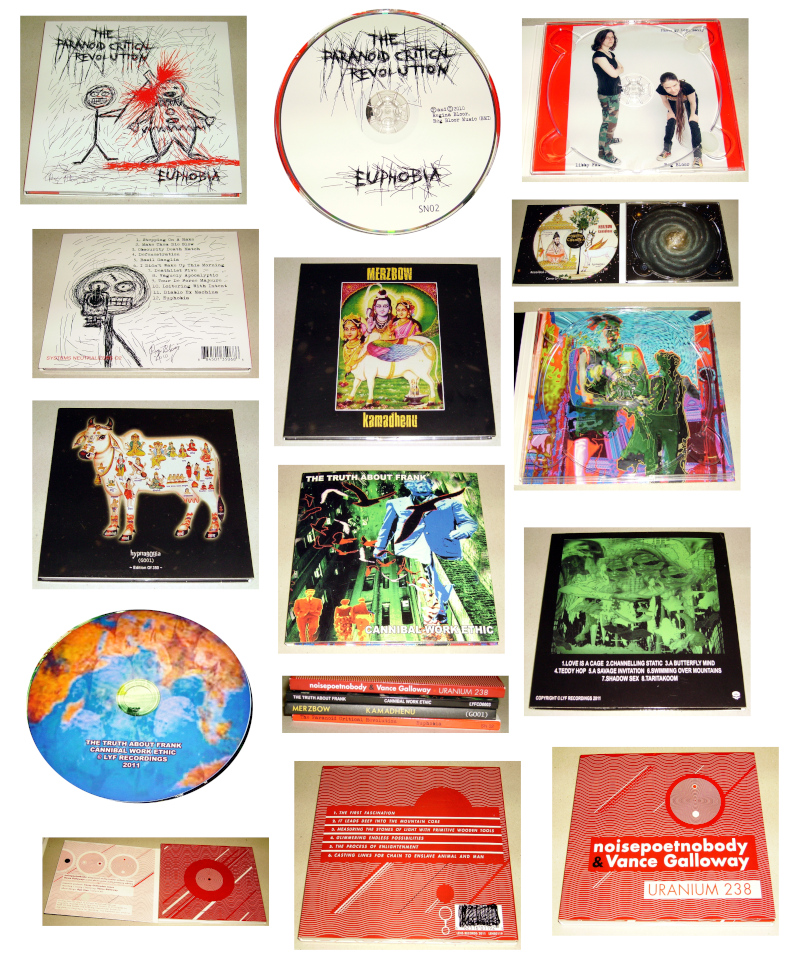 Arrived 10 May 2011 from New York City: The Paranoid Critical Revolution with Euphobia (SYSTEMS NEUTRALIZERS 02). Guess what? Glenn Branca has a record label and this is its second release, an essential heft of avant-dissonant guitar rock music hauled off by Reg Bloor and Libby Fab. Bloor plays all the guitar, did the ultra-violent cover art scrawls, and presumably also devised the bloodthirsty titles like ‘Make Them Die Slow’, ‘Deathlist Five’ and ‘Vaguely Apocalyptic’. It’s a killer set, all played live to tape, and the disc rocks like a freakin demon. Very nice to see a return to edgy and paranoid death-culture like they used to do it in NYC before Mayor Guiliani cleaned up Manhattan. More to the point, very nice indeed to hear some well-crafted and genuinely inventive death-heatray guitar noise after having waded for so long through the enjoyable but formless over-amplified sludge that has characterised too many American underground guitar bands for the last seven years. Bloor feeds her instrument through a pedal or two to lend it that fine wobbly alien treble-screech effect, and she might interject a blast of feedback now and again, but she’s a consummate lady of the licks – her playing is as clean and deadly-accurate as a curare-tipped spear through the heart. It just so happens she is married to Branca and has been playing his symphony music for 11 years, and playing alongside him in the rock band Branca/Bloor (just imagine if she’d been around to be a member of Theoretical Girls!). And of course Libby Fab’s drumming work is also excellent and it’s a shame she’s now left the band. As just about everyone else has already remarked, it’s impossible that this much noise, energy and sheer quantity of music could be created by a duo, and seeing them live must be an experience you never recover from. 35 minutes and 12 tracks of sheer vitamin-enriched tonic rock noise for your body. How did we miss this release last year? Essential purchase, natch!

Now for some Japanese noise from the emperor Merzbow. How wonderful to hear a new release from Hypnagogia, the English label that has poured so much energy into curating the catalogue of The New Blockaders. Kamadhenu (GO01) is a fairly astounding release of unbelievable magic swirling proportions, and makes me wonder if I shouldn’t be working harder to keep up with all the new records from this ultra-prolific performer. I seem to hear new ranges of depth and invention developing that I hadn’t been aware of; the familiar metallized pulsing has been succeeded by incredibly deep layers of synthesis and tone manipulation that are almost organic in nature, as though Masami had somehow contrived to build 18 Theremins out of wood and moss and was driving them all by solar power and wind farms. Still characterised by the usual sense of unstoppable power, this time the power is almost all Green and eco-friendly in nature. The sleeve is decorated with mystical Hindu imagery and one track is called ‘Churning of the Cosmic Milk Ocean’. Merzbow is finally getting into a Tangerine Dream groove…it had to happen! Arrived 17 May and muchly recommended before this small edition (350 copies) disappears into the pajama-tops of Merzbow completists.

Leeds combo The Truth About Frank don’t do outright noise so much, but their brand of electronic twisterment and distortionist antics is always underpinned by a dark and brooding energy that appeals to natural pessimists like myself. On Cannibal Work Ethic (LYFCD0003), we hear a variety of approaches to supplement their alien synth noise – menacing loops on ‘Love is a Cage’, wild beats on ‘Channelling Static’, and sci-fi voice samples on ‘A Butterfly Mind’ for example – all in the service of limning a threatening vision of doomed society. But this is no Blade Runner fantasy, it’s a chillingly accurate portrait of Britain in 2011, where the increasing demands of a nine-to-five job have now become so invasive they’ve taken over all aspects of our lives, even entering our dreams and, as shown on ‘Shadow Sex’, sapping our sex drive and vitality too. TTAF are reinvigorating the “dark ambient” genre in many ways, chiefly by using imagination and progressive ideas; one of their main strengths is the transformative nature of their tape and digital treatments, such that few familiar or recognisable sounds leave a trace on the disc, and everything has been twisted completely out of shape. Very good to hear such richness and body in these thick sounds; they use electronics like impasto paint applied with a palette knife. Full marks! Will be released on 4th July.

The team of Vance Galloway and noisepoetnobody create unusual sounds through a combination of electric guitar, string board, and electronics on Uranium 238 (LENS RECORDS LENS0119). You may be drawn to quiet and broody tracks like ‘Measuring the Stones of Light with Primitive Wooden Tools’ or ‘The Process of Enlightenment’, or you may favour the more raucous looped numbers like ‘It Leads Deep Into the Mountain Core’. Either way these improvising Americans, who have been doing it since 1998 in the Portland area, exert a fairly compelling magnetic pull with their work and it’s understandable that many audiences were “captivated” by their live sets; they are indeed working in great sympathy together and at times seem to be entering a deep trance. It’s also pleasing to hear some actual performed musical craft taking place, without any need to be propped up by a laptop packed with samples and soundfiles. The last track ‘Casting Links for Chain to Enslave Animals and Man’ is a 28-minute epic workout, which calmly and inexorably works its way across entire territories of invention and textures, changing and growing along the way. Was released 17 May 2011.