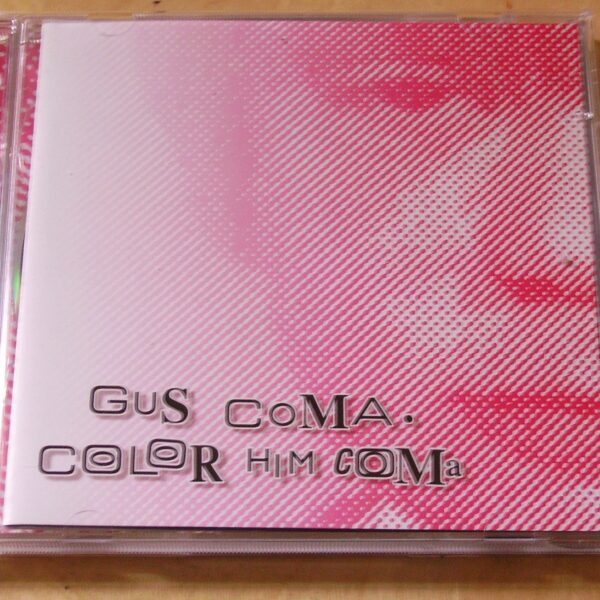 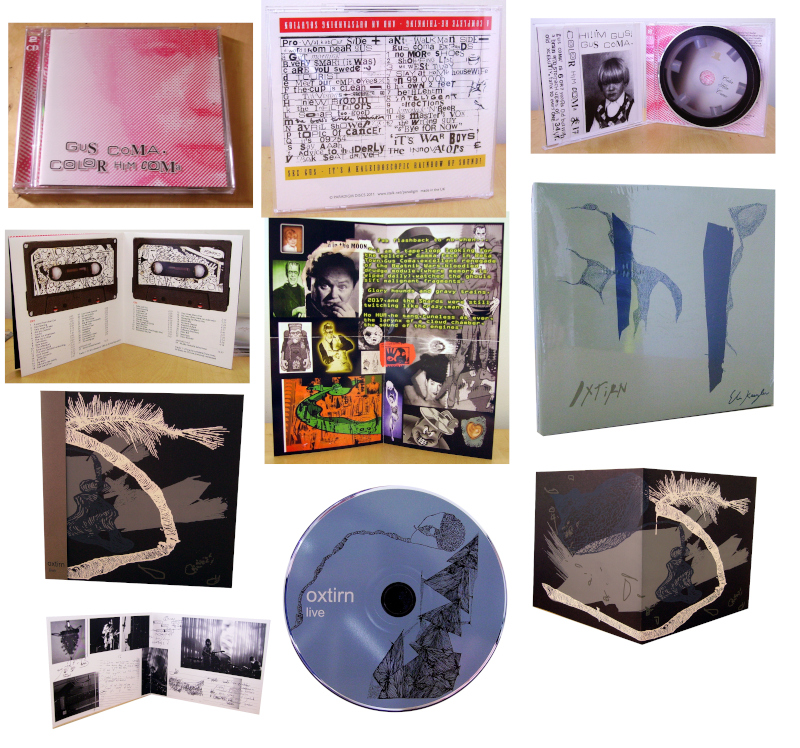 Another piece in the jigsaw puzzle of the It’s War Boys label has been reissued in the form of Color Him Coma (PD 27) by Gus Coma, in a double CD reissue package from Paradigm Discs. This UK post-punk freakoid label was, for a brief period in the 1980s, the home to some of the most extraordinary de-produced fractured pop-dub music ever produced. It’s virtually impossible to get a handle on its machinations, as all of the releases were put out under pseudonyms, with the band personnel changing false names between records with all the gleeful abandon of a false-faced master of disguise outwitting the Sûreté (although it is known that some of the musicians were also involved with The Homosexuals and Black Noise Records). Plus, a lot of the music only existed on cassettes, and those in small runs; the hand-made LPs, such as Milk From Cheltenham, command high collector’s prices now. Thus, what a blessing to get our hands on this, a comparatively late entry in the It’s War Boys catalogue (£17 in the series, perhaps the very final release?) which on CD1 rescues all 31 tracks from the original 1983 cassette release, and on CD 2 give us the complete Disco Coma suite, a hitherto unreleased compositional monster-werk. The sonic experience on this set is just short of indescribable; mostly very short fragments, many of them about 60 seconds in length, and constituting a jumbled grab-bag of aural delights: the fag-ends of brilliant studio constructions, resulting from the inventive dub-like antics behind the mixing desk that characterises these creators. Sluggish, weird improvisations made on the horn, percussion, or piano. Episodes of absurdist cut-up voices dredged up from the most obscure TV and movie segments that the tape-splicer could find in his musty collections of esoterica. Hideous and unsettling tape-loop compositions fashioned from multiple layers of unknowable source material. It’s all here, on one of the most extreme and subversive art-rock records that Paradigm has ever admitted to its roster, even giving the LAFMS CD I.D. Art #2 a run for its money. You will note I am being rather cagey about which creators hide under the Gus Coma mask, and I have some vague idea who it might be, but to reveal this information simply engages us all in a never-ending chase after a false trail of pseudonyms and misinformation. Aye, these artistes are taking the anti-celebrity stance about as far as it can possibly be taken, and doing so in a brilliantly playful manner. All original cassette artworks are printed in the package, plus a colour spread of what I take to be a more recent collage, shewing movie monsters, cartoon characters, the comic strip antihero Bizarro, and space travel. 27 years have not dimmed the hideous power of this music. If I may I would like to recommend this glorious reissue as an essential purchase.

I see Eli Keszler‘s Oxtirn LP has been reissued on CD by ESP-Disk as ESP 4061, which is a grand thing to do as the 2010 LP apparently sold out in as much time as it takes to say ‘Cream Cheese’ to a bagel counterman on East 86th Street. As I’ve already reviewed the LP in our current issue, may I direct you there for a more in-depth appraisal of this grand-scale work of percussive and metal mayhem, where Keszler is not just improvising his heart out but is effectively “playing” an entire art-gallery sculpture installation piece. Of supreme interest today to us is the fact that the label have also released a deluxe 2-CD edition which includes a live version of the work. The same notated score is used, but the instrumentation is slightly different, as are Keszler’s collaborators, but the lineup includes the players Ashley Paul and Geoff Mullen, who have very apt “skillsets” in this area and are both key to realising this composition. The live version, I’m here to tell you, to a certain degree has more immediacy, weight and grittiness than the studio version, and the alien elements – scraping metal, forlorn horn and woodwind sounds – really shine forth. As others have noted, the electric guitars really add a superb dimension of avant-rock basso-amplification to what is already a heady mix of improvisation, composition and controlled reverberating-metal noise. Issued with spiky screenprint artworks courtesy of Ashley Paul, too. This arrived here 15 June, so here’s hoping copies are still available of the luxury edition. 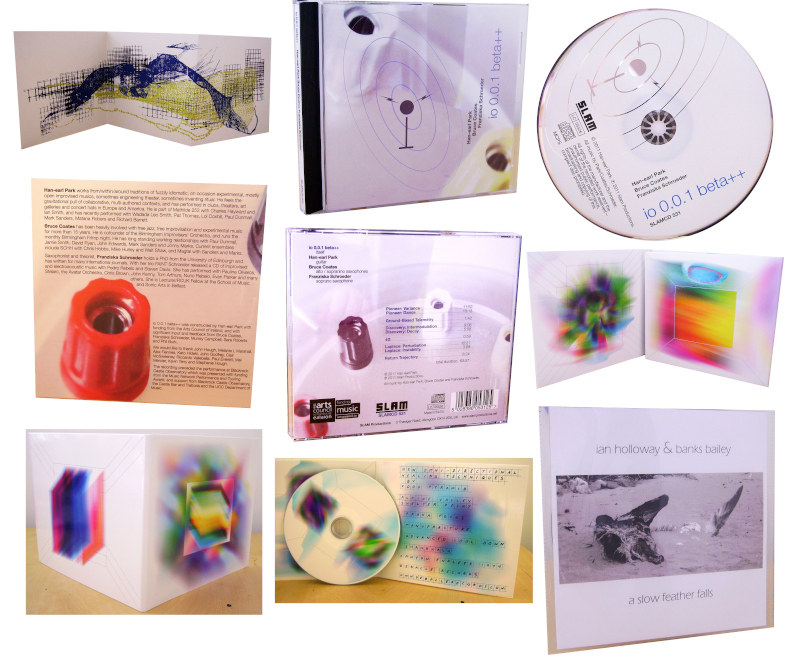 io o.o.1. beta++ (SLAMCD 531) is the title of a CD I received via the School of Music and Sonic Arts at Queen’s in Belfast, although it’s released on Slam Productions in Oxford and the chief instigator, Han-Earl Park, is based in Los Angeles. The guitarist Park, sometime member of Mathilde 253 whose fine CD impressed us in March this year, is joined by two improvising saxophonists, Bruce Coates (from the Birmingham Improviser’s Orchestra) and Franziska Schroeder (member of the trio FAINT), and the record documents the meeting of this trio with the “machine musician” io o.o.1. beta++. This device is an automaton, a musical robot if you will, built by Mr Park; it’s not just another computer programme that plays random sounds or builds an “interactive” space for other laptop musicians, but actually occupies physical space and performs on the stage alongside its human counterparts. Shades of Pierre Bastien…it might have been nice to scope some photos of this mechanical man at work, but there are none provided with the release. The multi-media artist Sara Roberts from California writes the liner notes and she does a much better job than I possibly could in articulating the cultural resonances of this man-meets-automaton event.

Food Pyramid‘s New Omni Directional Healing Techniques (DBL 057) is just one of many releases we received from Debacle Records in May and June. Food Pyramid are a trio from Minneapolis who have had three cassettes out on Moon Glyph, and they play a brand of suffused pulsating electronic ambient music which sometimes isn’t too far away from what I suppose you would hear on a relaxation tape or some other therapeutic aid. Perhaps the title of the album references this impression, in a knowing way. Not unpleasant combinations of several synth voices and computer drum patterns emanate from these three Americans, and almost all these lull-worthy instrumentals are played in a major key with simple one-hand keyboard inventions sprinkled on top. The fifth track ‘Shambhala’ shows some evidence that the trio are capable of breaking into a sweat, with live drumming freaking out behind a wash of vaguely jumbled electronic drone explosions; and ‘Manufracture’ does a convincing take on the Kraftwerk thing in its production of background film music for a monorail ride. The remainder is like a more saccharine pop-art version of Cluster.

The team of Ian Holloway and Banks Bailey from Swansea have impressed us before with their studied and focused approach to the production of pastoral drone-music allied with gentle field recordings of the countryside. A Slow Feather Falls (QUIET WORLDS SIXTEEN) is a 32-minute work situated in that same area, leading the listener gently through an endless landscape of glorious beauty – birdsong, river, insects. Throughout, a restrained keyboard organ maintains a steady drone, sometimes mixing the chords to suggest varied reactions and moods to the situation. While mostly dwelling in optimistic and sunny modes, the drone can also suggest slight concern and troubling emotions, and the fragility of the natural environment is thereby highlighted in a more articulated and genuine way than could be expressed by a thousand and one pamphlets written by some earnest ecologist or Green Party member. Meanwhile the stark cover image, taken at the seaside, likewise hints at nature’s darker side, and leaves us wondering what agents caused the death of this seagull whose buried wing juts out at an angle to the horizon. A forlorn image, and a moving piece of music/sound art. Released in May 2011.