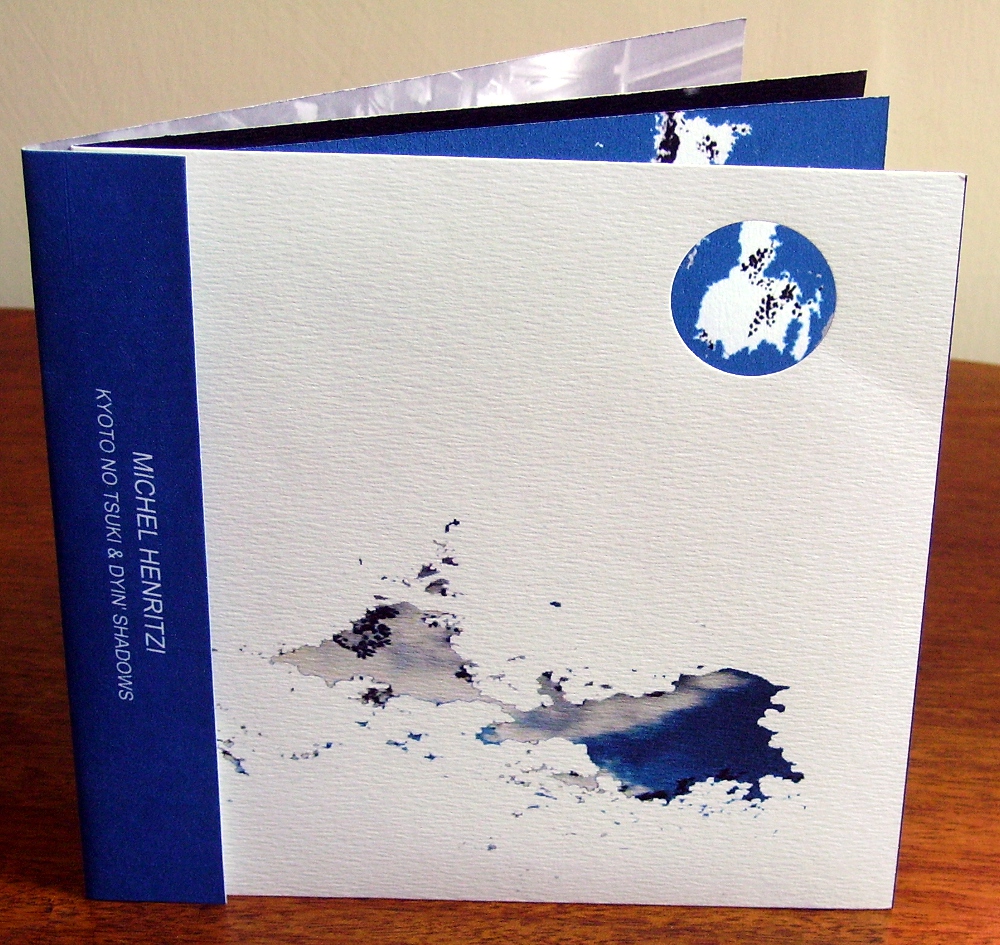 French improviser Michel Henritzi continues his forays into oriental-tinged string music on Kyoto No Tsuki & Dyin’ Shadows (DYIN’ GHOST 03), a record informed as much by the soul of early blues musicians as it is by the player’s understanding of contemporary (especially Japanese) improvised music. Playing mostly electric or acoustic guitars, or the banjo on ‘Shibari Blues’, Henritzi adds a plangent echo to his finished sound which makes each tune appear that much more melancholy and lost. Some of the tunes have been derived from the songs of Japanese Enka singers, such as Keiko Fuji, Hako Yamazaki and Sono Mari, and I wouldn’t be surprised, given Henritzi’s depth and intelligence, that he has made some inroads into studying the rich history of this form of ballad pop music. A sad but beautiful album released in an elaborate die-cut hand-made cover.

No less melancholy but weighted down with quite a different sickness of the heart is The Black Sun Transmissions (FANG BOMB FB016), from the wonderful Jasper TX, a fine craftsman who assembles his electro-acoustic music suites with patience and care working with 18 shades of the colour black from his digital paintbox. These are five pieces of sluggish and moving music which usually begin life as not much more than a carpet of textured noise, like radio signals from a very dark internal zone (hence the title); they gradually evolve into gloomy nocturnal tunes, aided by the cello of Aaron Martin on one track and the trombone of Henrik Munkeby Nørstebø on another. ‘All I Could Ever Be’ is a contemplation of wistful longing informed by loss, nostalgia and regret, a scene which at least has a comforting fireside somewhere in view, which is more than can be said for ‘Shores’; this long piece, aided by the drumming of Mike Weis, is a washed-out vista approaching a state of glorious desolation, where the subtle tonalities wash around the atmosphere like sea tides and early morning mist. The front cover is a silhouetted tree in a gray sky, while inside there is a tasty memento mori image to confirm the overall gloomy caste of this release.

The Hoek of Holland

Kasper Van Hoek sent us De Valse Wolfskwint en Andere Fabeldieren (HEILSKABAAL RECORDS HK019) in June this year. He has certainly advanced tremendously since he sent us the rather tentative Live at Extrapool in 2007, perhaps due to fact that he has recently completed his musical studies at the Frank Mohr Institute and earned his Masters degree in Interactive Media and Environments. This CD documents some of his activities during those fretful student years, when he was doing it in various parts of Groningen in the Netherlands, or at a music festival in Italy. He’ll grab anything and everything he can get his hands on to make a fine electronic broth: microphones, mixing desk, keyboards and computers, but mostly uses his home-made stringed instrument which he hauls around in a wooden suitcase. If I’m reading that photo correctly, there seem to be knobs, dials and jackplugs built into the lid of this rugged monster, and if he isn’t on the way to turning himself into a hybrid Keith Rowe / Florian Fricke / Harry Partch figure, then a Dutchman’s trousers aren’t as blue as they are. Sometimes performed with the help of fellow musicians Michael Dotolo, Hideki Kanno, Jan Klug and others, this is a very compelling collection of deep sounds performed with steady conviction and a determination to explore every corner of the aural labyrinths which Hoek is building for himself. Unfinished and vague in places, fer sure, but that is irrelevant when faced with such genuine thirst for experimentation. Only 100 copies pressed.

The band P.H.A.S.T.I. is a collaboration, perhaps a one-time only affair, between the American group PAS and the Polish duo HATI. In April 2010 the Americans flew over there to participate in a festival which was cancelled, but still managed to hook up with the percussionists Rafal Iwanski and Rafal Kolacki to record The Stages Of Sleep: A Metaphor for Torun (PAS RECORDS 010) in the studio. The work has been edited and given a naming schema that proposes an oneiric odyssey, setting out to depict the mysteries of the sleep state in an intuitive and empirical manner. For the most part I sense the American half of the act are restraining themselves somewhat (some of their other releases show a predilection for abrasive and very strange-sounding impro-gloop) but perhaps they are more versatile than I realise. Not all of the suite works for me, and I tend to lose interest when the players wander off into a diffuse haze of percussive resonances and vague synth tones, but at other times (‘Sleep Spindles’ or ‘Delta Waves’) the music has a heft and substance that sits on the chest like two pounds of undigested cheese and betokens the nightmare to come. There’s also a video of the work and the release is available digitally from Alrealon Musique.