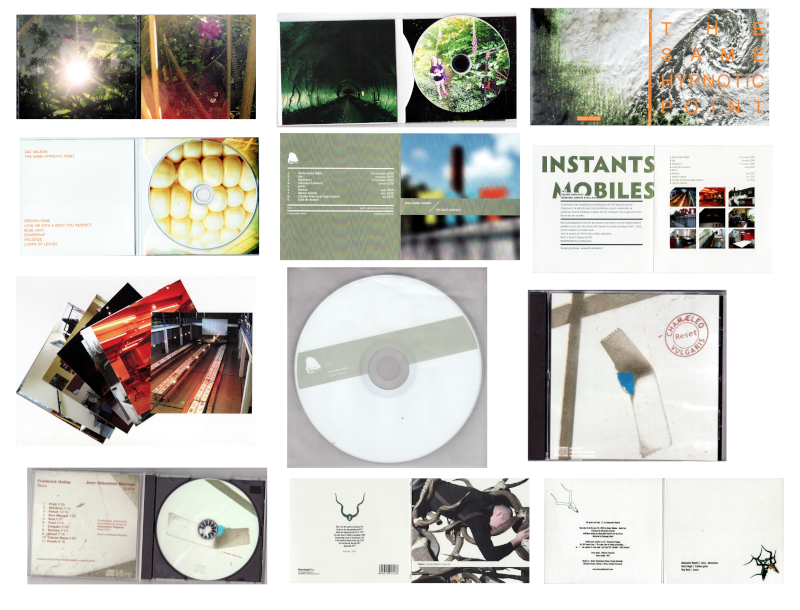 The Seattle label Debacle Records kindly continues to keep us updated with creamy emissions from its bulging horn of plenty. I know I’m at least a dozen releases behind and I can’t keep up with their schedule, but here are two items from July this year. Karnak Temples has three long tracks of deep droneisome slowness on The Din Of Light (DBL 063), using digital delay and echoed guitar lines to evoke the deep tunnels of psychic entry suggested by his cover imagery, and likewise the mystical leanings implied in his Ancient Egyptian name. Adam Svenson, whose first solo release this is, also uses photography to blur the edges between man, forest and guitar on his cover, remaking himself as a shape-shifting wood spirit to be discovered by children. Zac Nelson‘s The Same Hypnotic Point (DBL 061) is another highly eccentric production from this talented member of Trawler Bycatch, though quite different from the impressive Wicked Work It Out (Porter Records), which I took to be more in the vein of a lush pop-music record distorted through avant-garde methodologies. The Same Hypnotic Point is still lush, but it feels like a fractured and imaginative take on electronica and its many sub-genres, with Nelson doing everything in his power to subvert normal modes of digital production – all the sounds are alien and processed, every beat smeared and diffuse, every drone comprised of multiple layers of blended oddness. What’s most impressive is how he finds enough energy to fuel each piece for several minutes without losing our attention. ‘Blue Jack’ works exceptionally well in this overall experiment, and the 17-minute tour de force ‘Love Me With a Body You Respect’ uses clattery percussion and eerie singing voices to build a pseudo-ethnic trance piece that’ll soothe your brain lobes into cloud-cuckoo land on golden wings. At best, this mesmeric record is too good to be true and might induce waking dream-states.

Chamæleo Vulgaris is the duo of Frenchmen Frederick Galiay and Jean-Sébastien Mariage, using bass and guitar on Reset (ACHEULIAN HANDAXE AHA 1003) to create many subtle and almost indefinable moods out of improvised low-key meditations. Both players strive for sounds which have rarely if ever been heard from these amplified stringed instruments, yet they work hard to avoid the traps of vague abstraction and pointless noise explosions. In places they succeed in weaving delicate patterns of lucidity as subtle as a spider’s web, while elsewhere unleashing the full weight of bass-string scrapes and controlled volume eruptions, as on the long pieces ‘Boo Murgel’ or ‘Drash’. While this release may appear to be an example of process art (a sort of low-grade prepared guitar record), with its emphasis on scraping, hammering, detuned notes, crocodile-clipped strings, and foreign effects, there is still much craft in their explorations, even if the pair do sometimes meander inconclusively in their musical conversations.

Instants Mobiles (BRUIT CLAIR RECORDS BC 04) is the aural document of a work of a site-specific installation piece by French sound artist Guillaume Laidain of Grenoble. He did it during 2009 and 2010 at the TNT Shoe Factory in Bordeaux, a converted space used for contemporary art, and during this time a series of nine photographs were disseminated on the TNT website as part of the artwork. Reproductions of the pictures are included in this package and this release, in some ways, presents a reconstitution or a recasting of the original time-based work. What we hear on the disk is nice but not particularly surprising field recordings, documenting interiors and exteriors, with fragments of mumbled conversations, doors banging, phones ringing, and echoing corridors. It’s a nice jumble of banal information and reveals something of how the daily tedium of office administration (probably a big part of running a modern art gallery these days) overspills into the actual creation of art. In like manner, Laidain probably expects his art to overspill into your daily life in unobtrusive ways, only to catch up with you months later.

We’ve been hearing a fair amount from Alessandro Bosetti lately – his Royals CD was a superbly perplexing release making use of spoken word in a highly eccentric manner. On Become Objects Of Daily Use (MONOTYPE RECORDS MONO037) he performs as one third of the trio Trophies with guitarist Kenta Nagai and drummer Tony Buck, and we hear further experiments with unusual texts on this bizarre art-music record. Each song is an avant-garde shaggy dog story, a torrent of words describing weird and absurd events with rather florid and laboured prose and clearly written with consummate attention to detail. With slightly awkward phrases such as “He came close to simply proceeding” and the rather genteel air of these texts, they convey the sense of a refined European phrase book for young ladies from the 19th century, gone sightly awry. Fans of Peter Blegvad and Laurie Anderson will appreciate the intricate wordiness here. These pre-scripted works are then delivered by Bosetti (in English) using a sort of half-sung speech method, and the toneless, precise quality of his voice is really something to savour; he comes across like a dispassionate doctor reporting on the birth of purple-skinned five-headed quintuplets, as though it were an everyday event in his maternity ward. Amazingly, guitarist Nagai follows every cadence of these murmury vocal escapades and matches them note for note with his magic denatured guitar. Meanwhile drummer Buck adds to the spirit of subdued mayhem with his slightly unhinged and manic percussion attacks. If you’ve always enjoyed the muzzy feeling of bewilderment and wonder induced by the poetic genius of Mayo Thompson and his Red Krayola bands, this is the record for you. This release could easily drive most listeners to distraction in about five minutes; it’s a dense and complex knot of information, drawn out on graph paper and then rendered by insane post be-bop musicians, and you could spend many years attempting to decode the meanings of these convoluted texts. One listen and you will find yourself in as tangled a state as the man on the front cover.