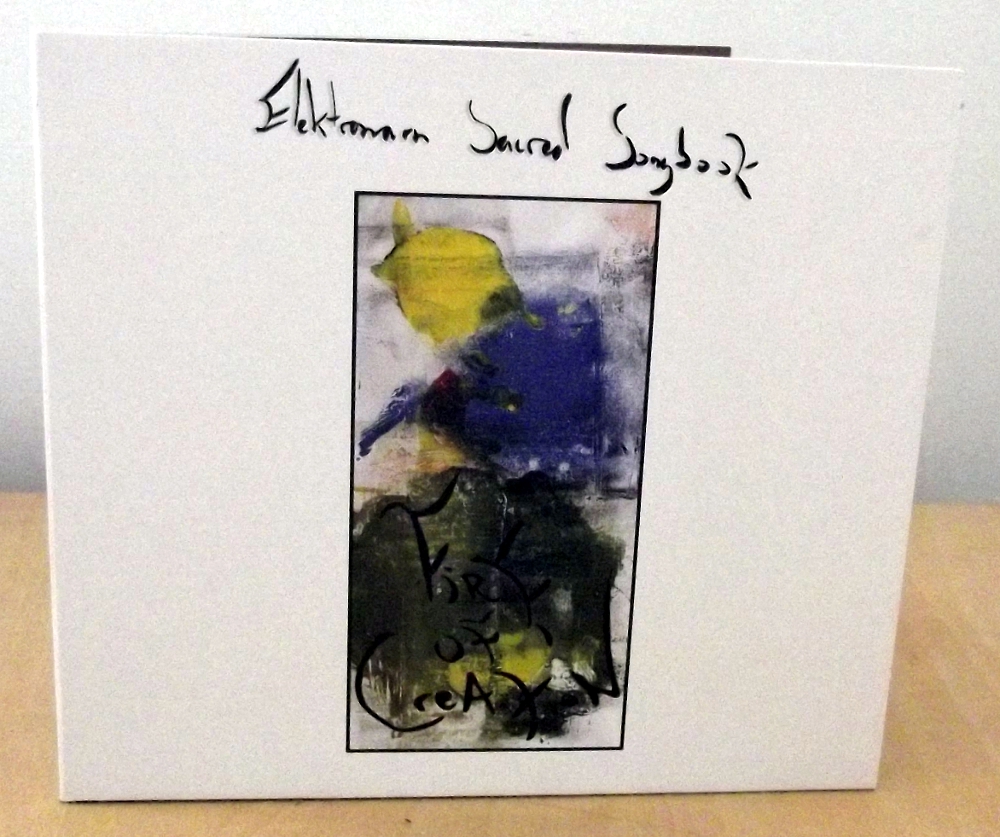 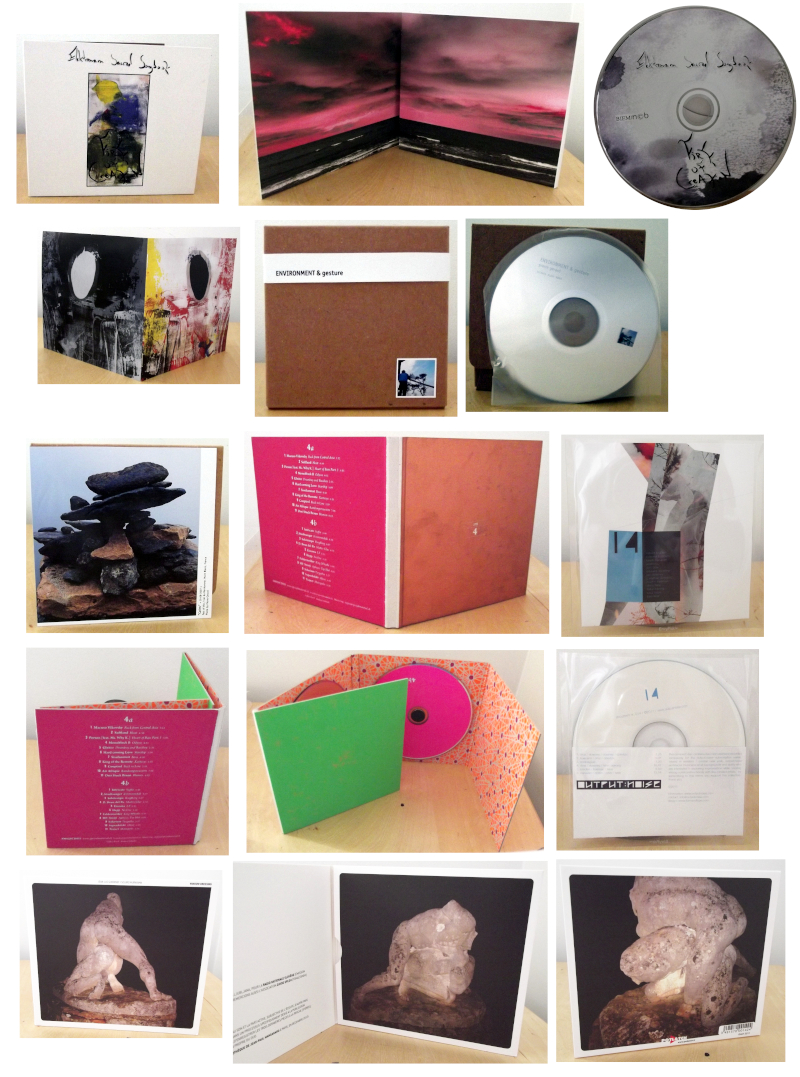 Never a one to think small, Danish creator Elektronavn Sacred Songbook deals with themes immense such as eternity, the creation of the world, death, peace, religion and the rotation of the earth on his CD Fire Of Creation (EMPTY SOUNDS RECORDS ESR 13). Magnus Olsen Majmon plays and sings every note on the album, and he wrote all the texts to the songs apart from those which were drawn from the Catholic liturgy (‘Sanctus’), inspired by a book of the bible or a Zen Buddhist text. All of this makes for a very peaceful and serene record, even if his singing voice – the words are in English, in case you were worried about a language barrier – appears rueful and careworn to the point where his rubbed-raw throat is about to start coughing up tears of pure jade. His sometimes-symbolic lyrics are laden with rich and beautiful images describing the glories of creation, on earth and in outer space, and indeed he appears to accept the view of the ancients that the bowl of the sky is in fact the path to Heaven itself. ‘Path Of Eternity’ certainly confirms this aspect, and it’s refreshing to hear a take on the outer-space imagery thing that doesn’t immediately restate the now-widespread and oft-repeated Sun Ra metaphor (i.e. outer space = a means of escaping persecution and alienation on Earth). Musically, these slow songs are pretty much a form of souped-up and slightly dissonant Neil Young – acoustic guitars and warm singing voice form the foundation of each piece, which is then embellished with rich drones, percussive bells, strangely patterned clattering rhythm effects, lone piano notes and other sparse decoration. His melodies are extremely odd, and twist and turn in beguiling fashion. The only thing Majmon lacks is a gift for concision, and instead each song is more like a discursive vocal ramble, Tim Buckley-style, across a vaguely organic terrain of rough chords and clunky musical shapes. An acquired taste, but then again there are very few records as heartfelt and sincere as this being made in 2011.

ENVIRONMENT and Gesture (3LEAVES 3L009) is the new release from Pierre Gerard, a Frenchman who is making a form of very gentle intervention in our daily surroundings with his near-imperceptible sonic actions, a strategy which to some extent aligns him with Jeph Jerman. His two main objectives are (a) to produce improvisations using common objects, not in the sense that he “dominates” the object like an imperialist invader seizing handfuls of sand, but rather to arrive at an integrated and harmonious situation where man and nature are brought one step closer to happy co-existence. As to (b), this concerns the more metaphysical ambition where he hopes his work will have an effect on time itself, causing a “soft impression” on the listener such that time starts to slide past in a more gentle and manageable manner, presumably a welcome antidote to the pressures of modern urban life where time has been sliced and parcelled into rigid divisions that suit the capitalist agenda. Gerard attempts the above by situating himself in a determinedly rural setting (water, stone and air are his materials) and creating gentle sounds which may involve dropping stones into a pond or engaging with a stream of water in some sympathetic way. The long 20-minute track contains such sounds occurring in sproadic intervals with lots of silence, and it feels isolated, stark, minimal beyond belief. However by the end of the album the external sounds of the environment also begin to appear, and help to put the work into context. I have reproduced the exact typographical rendering of the title of this release, which clearly stresses the element which Gerard regards as the more important of the two in his symbiotic relationship. 250 copies in hand-made chipboard package with a nice photo of a cairn built by the artist.

From Switzerland we got this unusual double-CD compilation SM4 (SPEZIALMATERIAL SM028CD015) featuring a long list of names which are all new to me: Softland, Monoblock B, Sissikontest, Cooptrol, Solotempo, Hepp, Feldermelder and many more. It’s an odd mix of electronic instrumentals, acoustic guitar songs, funky disco tracks, minimalism, psychedelic rock, and beats. High-tech production seems to be the abiding aesthetic throughout, and the set has an entertaining surface, but I find the music rather nondescript material performed without much passion, and a lot of the sounds feel very dated already. I quite like the brooding minimalism of Air Afrique’s ‘Randompercussion’ on CD 1 and the pseudo-dub effects of Einoma’s ‘LF’ on CD 2. Issued in a brightly-coloured silkscreen package printed on thick card.

Output:NOISE is a CD, but it’s also a website, a workshop, a badge and a subscription scheme which helps produce future releases and sponsor the artists involved in this collective. On issue 14 (DOCUMENT NR. 014) of their audio magazine, we have Robert Braden, Edward Downey, Chris Hine, Mike Kwong, Sara Odze and many others, all of whom are based in New York and playing together in various combinations, experimenting freely with musical styles. Where the first track may be a randomised burst of jazz-improv energy, the second is a doomy electronic dirge of dark ambient noise, and the third is something different again. I see this versatile clutch of creators have already produced issue 15 since I received this in August, and they’ve issued a live album and a new soundtrack work to boot.

Jean-Luc Guionnet is one of the most interesting French improvisers alive today, and even if you don’t enjoy his music I find it’s always good to engage with the vague dilemmas he seems to be setting forth in his musical conundrums. On Window Dressing (POTLATCH P111), here he be armed with the alto saxophone and playing against the percussion of Seijiro Murayama, with the cover adorned with photos of a statue which suggests their musical encounter wasn’t far apart from a homo-erotic wrestling match. Unfortunately this record to me feels as cold and static as the marble of that statue. The first long piece (31 minutes) was recorded for the National Radio of Slovenia, and it’s an infuriatingly frustrating instance of musical information being drip-fed to us in vague, hesitant bursts – subsist as best you can on a small puff of saxophone here, a half-completed drum-roll there, in an interminable sequence where almost every spoken utterance is smothered and strangled at birth. Guionnet produces only tiny quantities of sounds that might be deemed musical; most of what we hear is languid breathing effects. Murayama exhibits similar restraint, and delivers himself of desultory paradiddles as though a soldier were holding a gun to his head. Even less musical meat to be gnawed from the bone on the three remaining pieces of extremist minimalist improv, but what’s of interest here is that they asked Éric La Casa (frequent collaborator with Jean-Luc and himself an accomplished composer of no small mien) to record them in a particular way. My French translation isn’t quite up to the task of understanding it, but it seems to me that Eric was using a roving microphone set-up and “digging into the space and tension of the duo”. Sounds like a fairly fluid set-up that allowed him to move around without let or hindrance and thusly capture every nuance of the performances, transforming the implied two-man orgy into a three-way situation that promises plenty of juicy action. Musically, it isn’t quite as exciting as that, but this remains an assured performance of quiet improv which borders on the mystical-mesmerising, documented in sharp detail.