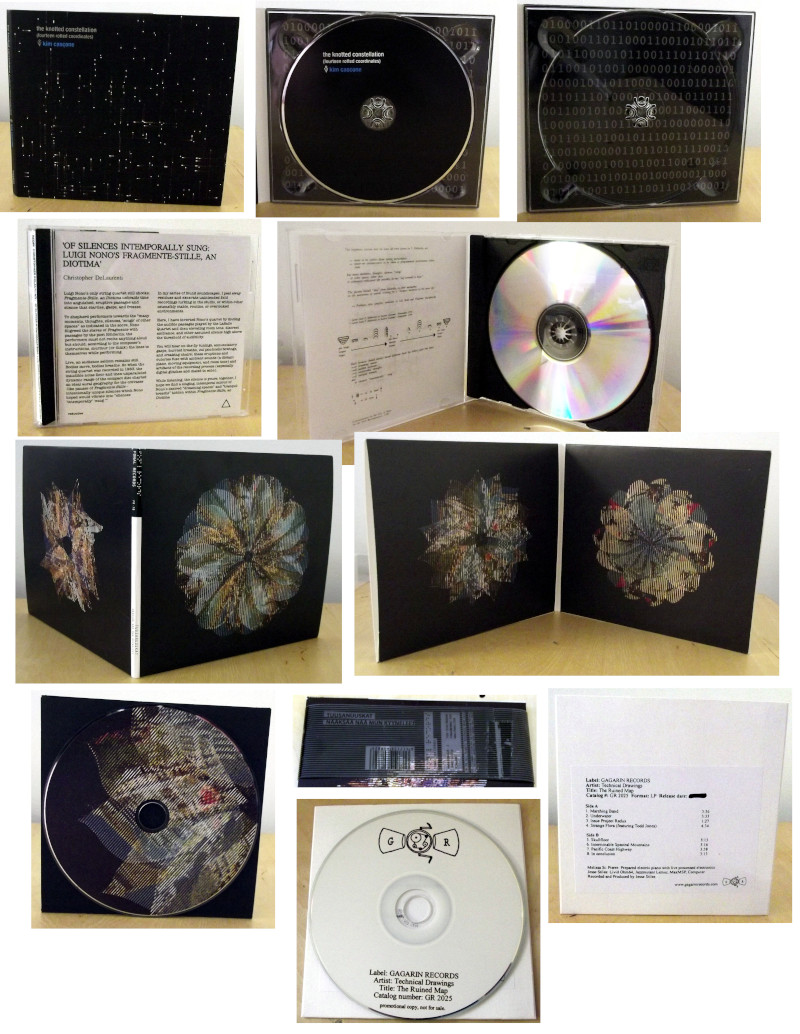 A fine baffling patchwork piece is The Knotted Constellation (Fourteen Rotted Coordinates) (MONOTYPE RECORDS MONO039). Over 32 minutes it’s hard to comprehend exactly what Kim Cascone is doing, but he starts with field recordings of church bells which he proceeds to mangle, overlay and roll up into balls of aural dough as fiercely as any Sicilian pizza chef; resultant metallic klang is something you can taste, so palpable it be. There follow streams of electro-acoustic-ish treatments where vaguely familiar events are strained, filtered and tossed about like so many olives in a green salad. Numerous collaborators appear to be involved in the weaving of this avant-garde fabric, among them C. Spencer Yeh, the tremendous violinist from Chicago, Mike Rooke, Guido Hennebohl, and others including members of the Cascone family, but their exact contributions are unclear. Violin gauze? Field gauze? Baritone gauze? What do these credits mean? If I took the co-ordinates of the subtitle as a clue, I’d still be lost as I wander this surreal landscape, for which Cascone’s digitised mayhem singularly fails to function as a map. It’s one of those compelling sonic assemblages that reflects the real world back to us in a distorted crazy-mirror fashion, and its episodic nature has already earned it the usual “cinematic” plaudits from observant writers and critics. “Made entirely on Linux”, is the boast of its creator, referring to his choice of operating system which presumably supported his audio manipulation software. I’ve only just gotten used to the idea of the laptop being accepted as a musical instrument; now operating systems count too?

An intricate conceptual construction is Of Silences Intemporally Sung: Luigi Nono’s Fragmente-Stille, An Diotima (REDUCTIVE MUSIC RED #4), from the American sound artist Christopher DeLaurenti, whose intellectual rigour is truly something to be admired here. What he’s done is taken a live recording of a Luigi Nono string quartet, a modernist composition notable for its bold use of long silences interleaved between stretches of dissonant tones which are described here as “anguished” and “eruptive”. DeLaurenti has edited the performance so as to remove the actual music, and leave us with the silences. Except the silence is of course not completely “silent”, because of the noises made by the audience, breathing, coughing and shifting in their chairs. DeLaurenti’s record features these ambient sounds, amplifying them to a very heightened degree, and also reveals “ghosts” of the original performance – echoes of strings and dying chords. Even the “tone” of the concert hall ends up on this record. “The silence is yours,” declares the creator in his notes; how’s that for a 21st-century update on the ideas of John Cage, and a significant democratisation of same? It’s an impressive piece, even if it is very bitty to listen to; the fragments of musical information are quite startling and disturbing as they jump unexpectedly out of the silences 1, making the work a true “inversion” of the original, as intended, and every bit as shocking as Nono probably had in mind in the first place. I’m very taken by this radical reworking and repurposing approach, as it seems to me it’s a true advance on the modernist cause and feels like the way culture is supposed to develop. Perhaps more musicians and conductors should be as imaginative and interpretive as this, instead of fossilising past glories in the mausoleum of the concert hall. While I remember, I should also mention this release is a clear progression from one of DeLaurenti’s previous works, Favorite Intermissions, which comprised secret field recordings of audience ambient noise between performances in a concert hall.

Now here’s Nääksää Nää Mun Kyyneleet (FONAL RECORDS FR-78), a bracing set of hot sizzling psychedelic electronic noise from Tuusanuuskat. This Finnish duo produce very pleasing abstract patterns and colours from the process of piling up bizarre sounds in a delightfully splurgy and painterly fashion, yet they remain true to a disciplined path and never once allow the music to descend into meaningless lazy drones or leave the stew sticking to the bottom of the saucepan. The title here translates roughly as “a total shambles”, confirming the ramshackle nature of sounds heaped up in disorder, and how the creators wisely did not overcook the work with too much studio production. Raw energy bubbles like black power oil from under every crevice and nook. The other thing I like is the very positive and uplifting vibe from this album – the very full sound, the use of major keys throughout, and the relentless busy-ness of the detailed eventful music cannot fail to have an energising effect on you. Matter of fact when I’m done listening I’m going outside to chop some firewood to store in my barn for the winter. Yet another thing I like is the overall absence of the fay and whimsical nature which has sometimes characterised earlier releases from Fonal acts, but I suspect we have long since moved beyond the “Finnish Folk” pigeon-hole. Tuusanuuskat is two major creative Finnish Forces, Jan Anderzen (the main man behind Kemialliset Ystävät) and Sami Sänpäkkilä (also called Es, and the head of Fonal Records). Long may their filters and phase machines continue to gush forth with fizzing sun-drenched glories of this ilk.

The Ruined Map (GAGARIN RECORDS GR 2025) LP by Technical Drawings is one we’ve had in the box since May or June this year, along with a lovely album by Max Goldt on the same label which we’ll get around to one of these days. I’ve only got promo copies in plain white CD sleeves, so I’ll try and find an image of the cover for you. Technical Drawings are two creators, Melissa St Pierre with a “prepared” electric piano which is subjected to various electronic treatments and computer processes from the tool-suite of Jesse Stiles, who also recorded and produced the record; it was recorded in Pittsburgh and produced in an old textile factory, which is not inappropriate as The Ruined Map feels very much like music made with a sewing machine. The piano performance forms the core of each piece, and what may at first seem like simplistic patterns and rhythms plonked out on a toy piano soon evolves into complex and mesmerising music, with plenty of overlaid cross-rhythms, embellished with spare but ingenious use of foreign electronic sounds. Like the above release, I admire the discipline at work here: many of these eight tunes are just three minutes in length, and the duo don’t feel the need to create self-indulgent lengthy compositions when they can create an interesting and intricate statement in a concise manner. Any post-punk band singer from around 1980 would have been proud to have these players in their rhythm section, although said singer would have to be a Kraftwerk fan too and would be working overtime to fit their disaffected lyrics into the deceptively simple frameworks of Technical Drawings’ skeletal maps. Oddly enough, the guest poet Todd Jones tries to do just this by adding his rap to ‘Strange Flora’ here, and for me it’s the only track on the LP that flops; his sub-Nick Cave haunted mannerisms are something I can do without. Otherwise this release is a total winner.