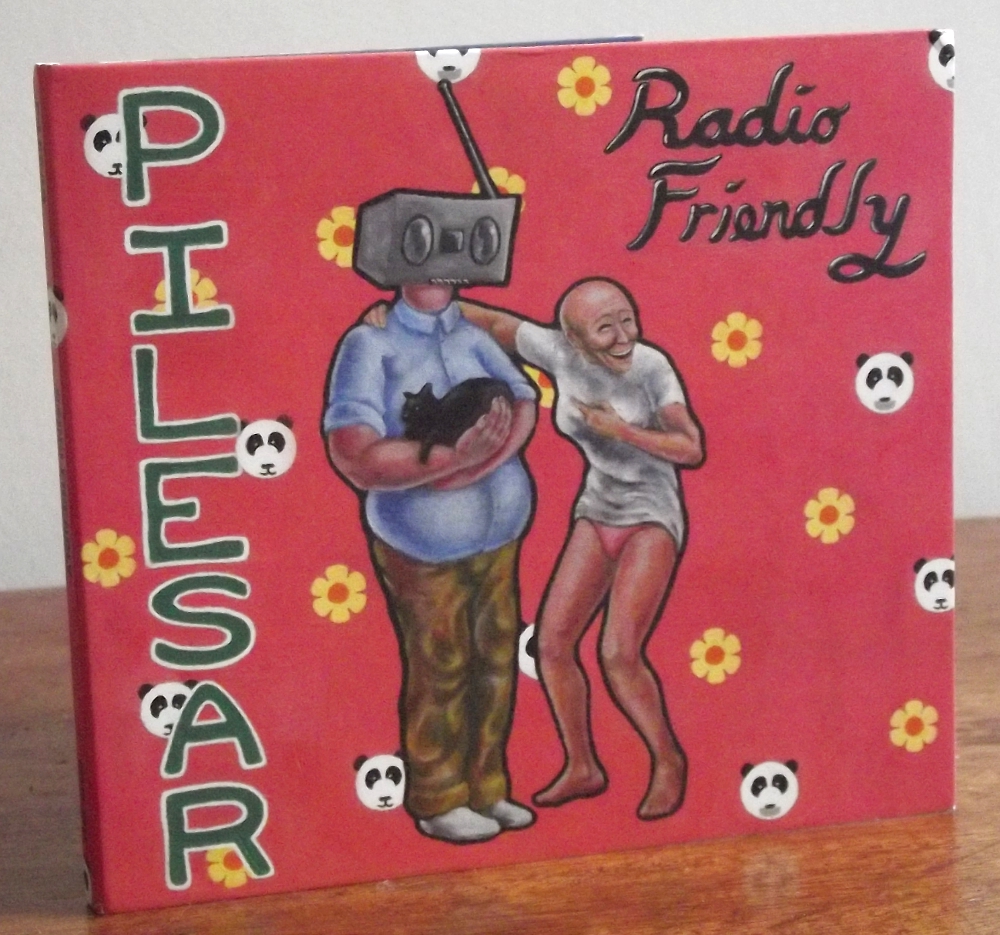 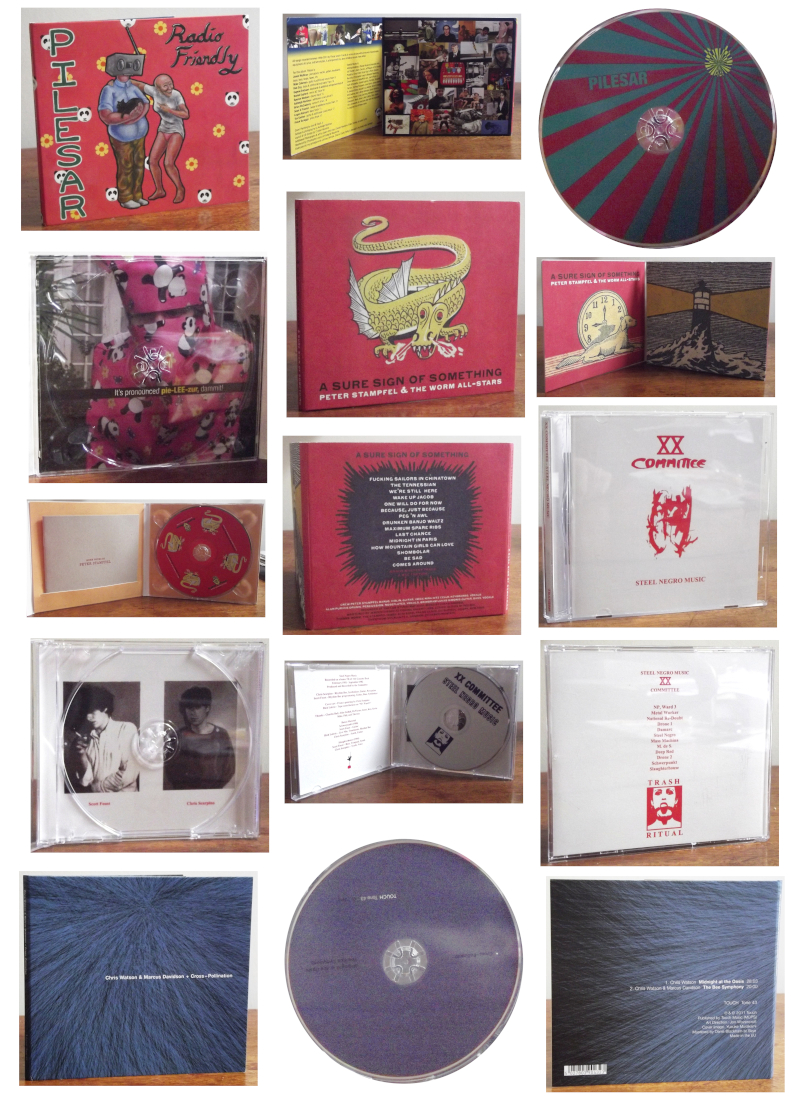 Radio Friendly (PUBLIC EYESORE PE112) is an energetic set of crazy songs delivered roughly in the lo-fi, unkempt and noisy post-new wave Dinosaur Jr / Sebadoh style from Pilesar, an American confluence of talents which clusters around the pale thin body of Jason Mullinax, who wrote all the songs, plays most of the instruments and sings – joined on some tracks by guest drummers, guitarists, keyboard players and remixers. Pilesar’s lyrics are printed in full on one panel of the colourful digipak, and a quick survey of this word-salad reveals there isn’t much content with intended lasting import outside of the absurd, the zany and the cheerful mixing-up of assorted lowbrow references. In imparting this grab-bag of information, Mullinax’s singing voice evokes that of Mark Mothersbaugh at his most affected. Come to that the whole album gives off the fascinating vibe of a lost cassette-band from the wrong side of 1995 that is still content to make xeroxes of Devo LPs, but this isn’t to deny Pilesar’s talent for sheer melodic fun and wayward noise expressed in tiny packages of quirky pop-song brevity; most lasting less than two minutes, these little ditties just fly past in the fast-moving party atmosphere, and the radio-friendly boast of the title may not be completely ironic, in spite of the determination to record and produce every single track with the weird-o-meter bouncing in the red. Aye, almost every sound is wobbly and peculiar, but thankfully not over-processed with digital interference, and we hear good-natured ramshackle keyboards played in The Residents mode, sightly punk-rocked loud guitars and clattery percussion, each player tearing into each song with the fervour of insects burrowing into a rotten tree trunk. Only the cover pictures feel uncertain, with their jumble of ill-fitting photos (some of them very strange, some utterly banal family pix) and a slightly disconcerting cover painting that shows Pilesar is still clutching for an image of itself it feels comfortable with. One photo shows Pilesar attempting to foster an aura of menace like one of The Residents newspaper men; only problem is he’s wrapped in childish pink birthday paper with fluffy panda bears. Pix aside, a nifty item!

The Worm and the Angel

Now here’s the great Peter Stampfel performing on A Sure Sign Of Something (ACID SOXX MUSICKS XX216), singing and playing his fiddle, banjo and guitar along with his Dutch compadres who call themselves The Worm All-Stars, led by Lukas Simonis. Stampfel met up with Simonis soon after the release of the Holy Modal Rounders movie in 2008, and after an informal set of rehearsals and two performances, this recording session resulted. The song list is the usual eclectic mix of styles and things – original songs written by Stampfel, one by his old partner Steve Weber, one by the Unholy Modal Rounders, polkas, banjo tunes, and American folk songs, some of them documented on the Harry Smith anthology. Everything is annotated by Stampfel in his enthused and inclusive manner in the enclosed booklet, where he casually tosses out details of recondite and exotic musical history with ease; just scanning a few lines will cause you to adore this man and all his endeavours and hopefully inculcate a fresh desire to engage with his fascinating back catalogue. He’s simply in love with music, and with performing; and flying in the face of all things post-modern and ironic, he believes songs and lyrics have meanings which can enrich our lives, and is determined to push his wiry voice every inch of the way to let that meaning shine forth. This album may not be as deeply eccentric as anything Stampfel made in the pre-psychedelic 1960s, but it does have a very charming strangeness all of its own which soon begins to emerge; the supporting players are in fact a perfect backing combo for the man with their odd and clunky accompaniment, their sparse sound and unusual instrumentation, and they perform very well as backing singers too. Count yourself one of the lucky ones if you saw this unique combo play live when they toured Belgium and The Netherlands. I doubt they will pass across the earth again in our lifetime.

Chairmen of the Board

Now for a complete change from songs to experimental industrial noise from the early 1980s. XX Committee was Scott Foust (later of Idea Fire Company) and his friend Chris Scarpino, and their debut release Steel Negro Music (TRASH RITUAL TRASH 049) was originally released as a cassette tape in 1982 on A.R.P.H. (433rpm made it available for a time). Made with what one might call the standard-issue setup of the time using guitars, synths and beatboxes, these works of abstract grindery are bleak, punishing and relentless, yet they are also very imaginative in the way the minimal guitar lines work their way around the strange, irregular pulsations that grunt forth from the anonymous, robotic metal boxes. The claustrophobic, very minimal and abrasive style of playing will drive sane men into the booby hatch with its determined, near-mindless and insistent repetitions. Everything is underground, alien and disaffected, the Robert Fripp sound of “Heroes” taken ten steps further into the dark banks of nihilism. Kind of surprising that this item wasn’t scooped up for reissue by Vinyl On Demand, as in terms of tone, style and vintage it seems to fit right in to the aesthetic of that label. Note Foust and Scarpino’s rather American approach to this aural territory, which had been heavily staked out and colonised in Europe and the UK by this time; a comparative study might be in order. Equally instructive might be to play this alongside any given release by Wolf Eyes from the last 7 years, and see which wins hands down for sheer growling menace. Given the fact that we’ll never find a cassette original, this handsomely presented reissue is most welcome; plus there are two additional tracks, ‘Schwerpunkt’ from 1984 where the duo is joined by Rich Labrie who made the live mix; and ‘Slaughterhouse’ from 1980, a rare outing where Foust plays the tympani along with the synths. An excellent companion piece to the 1983 Network LP, another instance where the original vinyl is quite rare but there was a CD reissue in 2008 on a Polish label.

Equally immersive as above, but far more benign, is the sound of Cross-Pollination (TOUCH TONE 43), a collaborative work realised by two artists on the Touch roster, Chris Watson and Marcus Davidson. The first of these two long pieces is ‘Midnight at the Oasis’, a Chris Watson composition which he created through a “time compression” of field recordings made in the Kalahari desert; in 28 minutes, we are whisked sonically from the rising to the setting of the sun on an impossible fantastic journey where nature heaves, boils and subsides around us. Birds and insects are the wildlife that dominate this magical zone, and the clever concision by which these recordings are edited and elided together must surely reveal and amplify the patterns and rhythms of nature. One of Watson’s more serene and minimal creations, it nonetheless evokes undercurrents of what he describes as a “beautiful and hostile environment”. Vivid surround-sound sumptuousness pours off the disc; an Attenborough wildlife broadcast rethought as sound-art. The second piece, ‘The Bee Symphony’, is a collaborative work between Watson and Marcus Davidson, and it features five singers credited as The Bee Choir. Their minimal and distant harmonies are contrasted with the field recordings of an English garden full of beehives, in a way that Virginia Astley surely would’ve adored. A simply gorgeous, spectral sound results, an imaginative intervention of music in a site-specific environment, and a work that succeeds totally in creating a “unique choral collaboration”. Davidson composed and arranged this using tapes supplied by Watson and Mike Harding, but the actual event appears to have been recorded live. While it would conceivably have been possible to assemble this work in the studio through combining separate recordings of bees buzzing with singing humans, the fact of live recording adds considerably to its aesthetic value, and one can certainly make out a kind of strange organic improvisation taking place between the humans and the bees, at some deep level. This was part of the 2009 Pestival event organised by the wonderful Bridget Nicholls, a very intelligent and questing naturalist, who personally commissioned this unusual and wonderful work. It makes you wonder why there isn’t more sound art featuring bees, although Eric La Casa did realise his ‘Zone Sensible’ work for Room 40 Recordings recently.