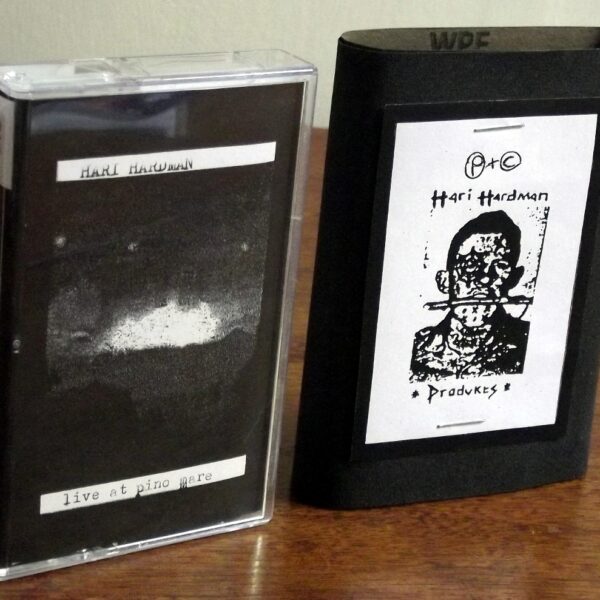 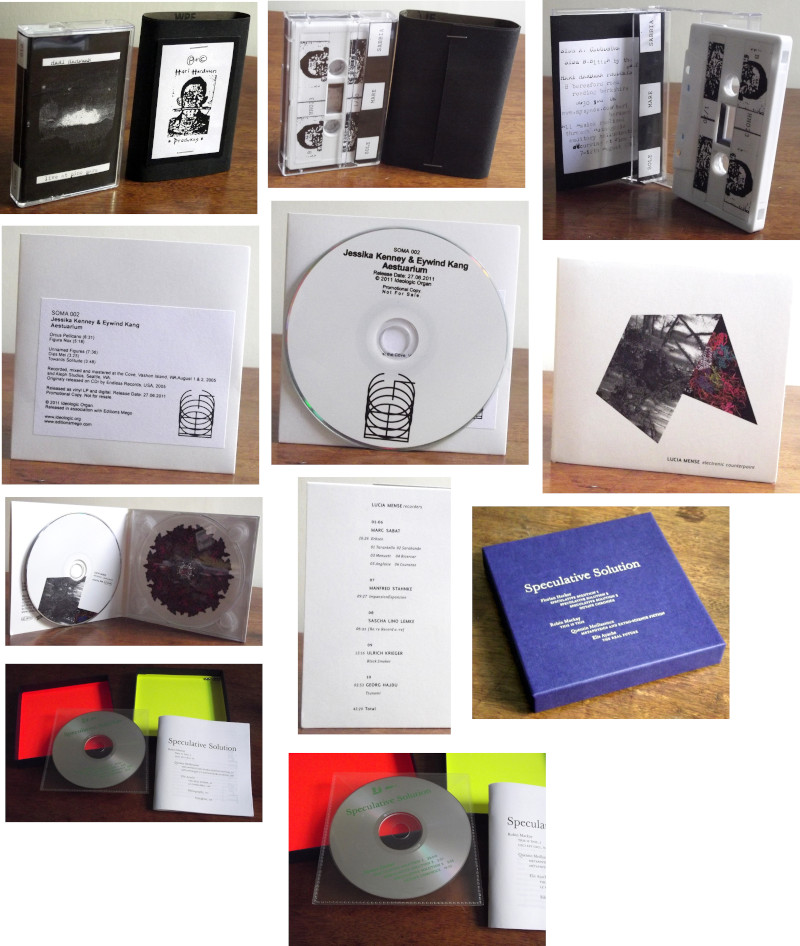 From April 2011, a recent piece of Hari Hardman Produkt is a cassette tape wrapped in a band of emery paper. Yooch. Not one for sensitive fingertips, and a nod to a nihilistic cultural strategy used knowingly for an LP by Durutti Column (LP wrapped in sandpaper) whose designers copied it from a Situationist art book by Guy Debord and Asger Jorn. Aim was to produce a book which would physically attack any other books shelved either side of it, gradually eroding them away. Live At Pino Mare (H023) is just two pieces of brutal minimalist monotony-noise in ten minutes. It will gradually erode away the listener. Hardman declares the music was “realised through Autnagogic Auditory Hallucinations”, thereby invoking everything from a La Monte Young dream-music to lucid dreaming techniques by way of sleep-learning, self-hypnosis, and psychedelic drugs. In all probability, such a strategy does not actually exist. I do not recommend you play this tape before nodding off last thing at night, nor to keep it under your pillow, as it may provoke sick nightmares. On the other hand it may also transmit a stream of valuable data and implant it directly into your cerebellum. The real Pino Mare is a popular seaside resort in Italy. I very much doubt if the music was actually recorded live at that endroit, as they don’t actually have a Butlins or equivalent venue, but perhaps Hari Hardman is capable of out-of-body experiences when inducing his own hallucinations.

An impressive belt of ascetic and crystal clear music with deep spiritual overtones is Aestuarium (SOMA 002), an LP released in June 2011 on Stephen O’Malley’s SOMA label via Editions Mego. The singer Jessika Kenney and violinist Eywind Kang both contributed parts and ideas to Sunn O)))’s recent Monoliths and Dimensions album, and so impressed was O’Malley that he arranged for a reissue of this 2005 collaboration which had previously been available as a CDR from Endless Records. Using just voice and viola, the duo deliver themselves of five minimalist meditational psalms, invoking “Gaelic psalmery and Tibetan notational gestures”; this may be seen as an attempt to find common ground between western and eastern religions, but also results in a very limited melodic scale, just one of the many rigourous hardships self-imposed by the duo as they produce these slow and achey lamentations that are intended to find consonances between salt water and fresh water. Not content with that, Renaissance science is also brought into the mix with a reproduction of Giordano Bruno’s Speculum Magorum on the front cover, and a further musical aspect with the “microtonality of the tetrachord”. Some of these notions border on the pretentious for me, but I can forgive everything when faced with music of such breathtaking clarity, simplicity and beauty. The discipline of the work is key; not a single wrong note has ended up on the record, and every vocal strain and bowed note shines forth with the weight and import of the utterance of a hermetic mystic or ascetic monk who has been subsisting on a diet of mouldy roots for 18 years. This project has also been highly instructive for the musically omnivorous O’Malley, who has now found a way into the “spectral” music of composers Gérard Grisey and Tristan Murail as part of his ongoing musical research.

Lucia Mense is an academically trained recorder player who is at home performing Medieval, Baroque and Renaissance music, but for Electronic Counterpoint (SATELITA 004) we find her collaborating very successfully with contemporary composers and performing with her acoustic instruments alongside live electronics and computer treatments. The Canadian Mark Sabat wrote a six-part work in celebration of flowering vegetables, and the results are six sprightly dance pieces with a pagan undertone that wouldn’t have been out of place in an alternative version of the Carmina Burana. Manfred Stahnke is more up to date with his ‘Impansion Expansion’ piece, which requires computer-processing of Lucia’s bass and tenor recorders; this rather sad and distant work may appear to be a simple exercise in tuning systems and arrangement of tones, but it showcases the acoustic qualities of the recorder beautifully, adding emphasis through judicious use of digital echo and multiple layers of recording. Computers and pre-records are also used on Sascha Lino Lemke‘s composition, which is asking pointed questions about contemporary life and the preservation of personal digital content; the music is somewhat disjunctive and Mense is required to make her alto recorder squeak and fidget like a high-octane mouse. Any more of this breathy improvisational work and she’ll be invited to join Phosphor any day. Next comes the astonishing ‘Black Smoker’ composed by Ulrich Krieger, for me the most deeply affecting and successful piece on the release. California-based Krieger is, like O’Malley above, another musical omnivore who composes, improvises, plays chamber music and electronic music, and draws no boundaries between free noise, heavy metal and ambient music. His own career and experience in working the saxophone may have enabled him to compose music which is undoubtedly very sympathetic to the qualities of Mense’s sub-bass recorder. The ubiquitous MAX/MSP software was used to process the sound on this hymn to hydrothermal vents, fissures in the earth’s surface which exist on the ocean floor (I’m not making this up), and it’s a sumptuous long episode of slow-moving microtonal droning that must have required every last drop of Mense’s superhuman technical resource to realise. Put another way, she must have iron claws which grip the recorder like a mechanical derrick. And if you think playing a sub-bass recorder is a cinch, just try Googling for a picture of one; some of them are about ten feet tall and I doubt if I could even pick one up, let alone hold it in place. As to that, it might have been nice to provide some pictures of the instruments and performer in the booklet here, but the cover artworks by Frau W are suitably abstract and intriguing.

Speculative Solution (EDITIONS MEGO 118 / URBANOMIC UF13) contains some works of electronic music by Florian Hecker, but that’s just one part of the package of this boxed set which also includes a 158-page booklet of texts, and five little ball-bearings. The music is apparently an expression of the concept of “hyperchaos” as set forth by the French philosopher Quentin Meillassoux, who also provides an essay in the booklet called ‘Metaphysics and Extro-Science Fiction’; the other contributors are Robin Mackay and Elie Ayache, and the text is printed in English and French. The expectation is that we play the electronic music very loud and that we read, re-read and even read aloud the texts in the booklets; at some point Hecker’s music, methodologies and experimental approaches will be seen to align themselves with the ideas of Meillassoux, Mackay and Ayache. No suggestion is made as to what we do with the ball-bearings, although as they roll around the bottom of the box they probably demonstrate something about anti-matter in space, or the behaviour of subatomic particles, or something. As a non-scientific person, I freely admit all of this is beyond my ken, and I haven’t made the slightest headway in attempting to penetrate the dense printed texts; anything that discusses “catalytic objects”, “prosthetics for spiritual exercises” and “the notion of ascesis” on the second page loses my attention instantly. However, the disjunctive music is very interesting and even rewarding on some level, providing you enjoy listening to tones that have been rendered clinical, hyper-precise and inhuman to the point of absurdity, and which project themselves out of the speakers with the same relentless and unexpected energy as if they were Quarks shot from a particle cannon. I realise the project is probably intended to be provocative in some way (Urbanomic also publish the writings of Ray Brassier, whose radical texts have been quite influential on Mattin’s current thinking), and I completely respect Hecker’s willingness to engage with cutting-edge scientific theory and his intellectual ability to do so, but Speculative Solution doesn’t seem to be working very hard to make the ideas more intelligible to idiots like me. When Disinformation (for example) flirted in the limbo between scientific ideas and ambient music, he was at least making the effort to explain things, ensuring that we understood some of the core concepts behind the functionality of sound mirrors or shortwave radio waves. Conversely, I find the texts in Speculative Solution are incomprehensible and alienating.