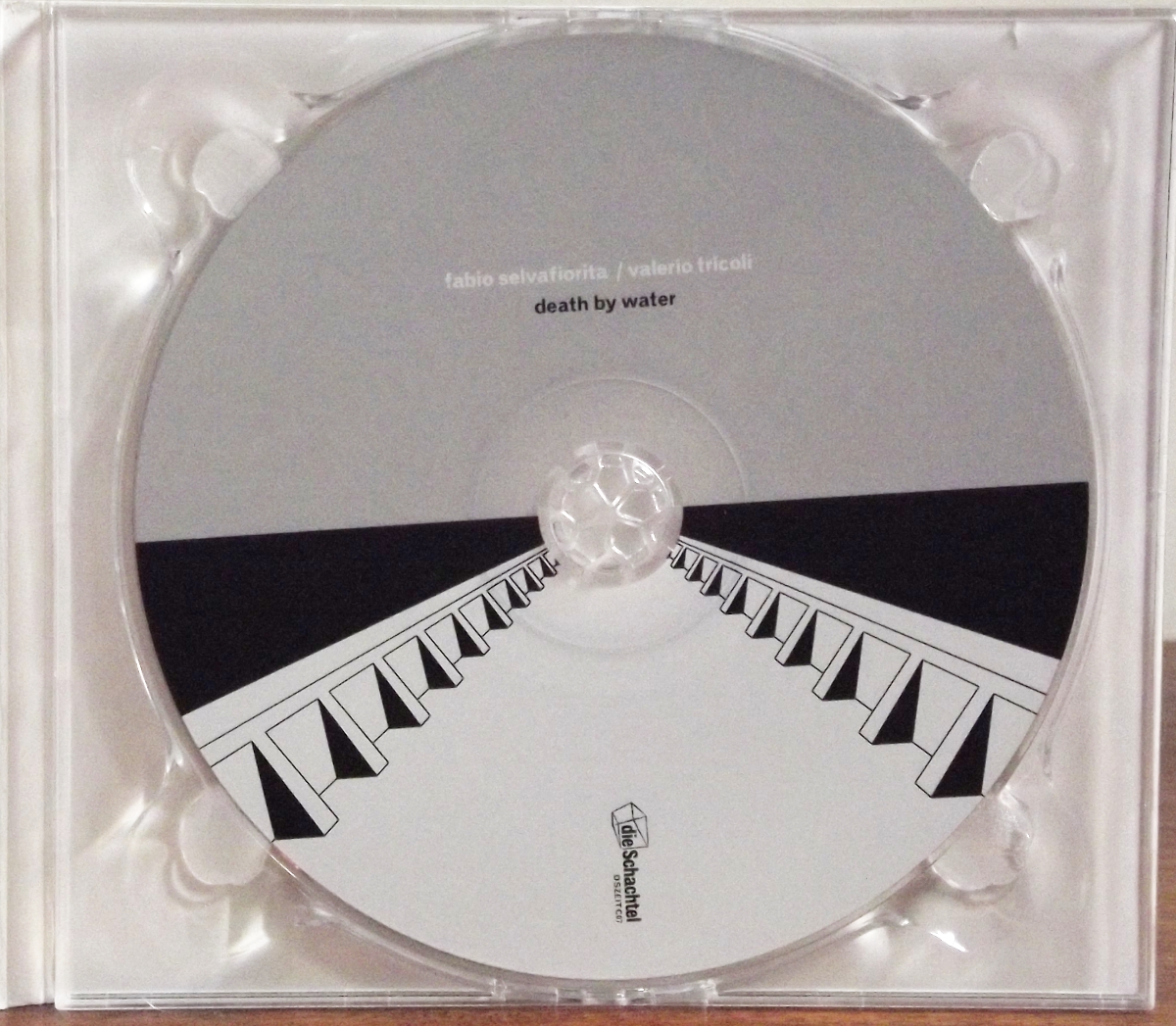 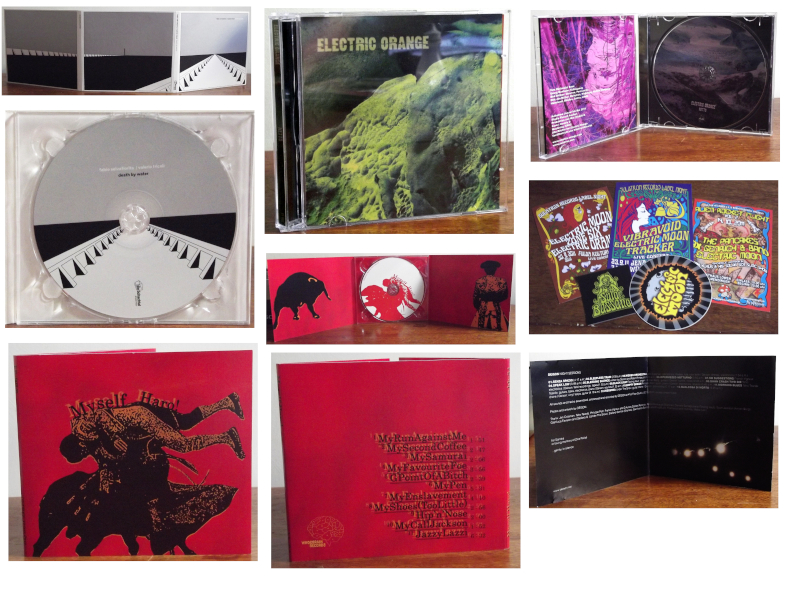 The Undersea World of Phlebas the Phoenician

I’ve recently found the “September” bag of CDs, although there’s still a sizeable bunch of releases from the summer of 2011 not yet fully unwrapped. First today is a fine art piece of business from two Italian composers, Fabio Selvafiorita and Valerio Tricoli. For Death By Water (DIE SCHACHTEL ZEIT C07) they worked with a tremendous quantity of field recordings made in Italy, and then performed a kind of four-handed live mix on the tapes as if they were two concert pianists, playing the editing suite and mixing desk with their supple digits. As it happens, they managed to compress many hours of sound into a single 41-minute piece this way, but the main thrust of the work is to convey an incredible sense of space, distance and impossibly enormous vistas. “The space for me is the main topic of the composition”, confirms Fabio, in between mouthfuls of brushcetta. “A new imaginary space perception should always be the result”. This concern is clearly echoed in the striking cover art produced by dinamo milano, a landscaped vista which requires three panels of the digipak to express its complete latitude. While I was at first reminded of the sleeve art to the first two Blue Öyster Cult LPs drawn by Bill Gawlik, the artwork and music here both portray a near-desolate dimension of profound and static minimalism, only tangentially connected with the watery sources that fed into it. The canal or lake of the front cover is nought but a block of solid blackness; the waters on the disc, transmogrified and re-digitised like so much strained soup, have evolved into a murky blob of mysterious proportions. The listener will soon find themselves rather lost in the midst of this abstracted ocean, lacking compass or sextant to set their course. The reference to T.S. Eliot’s The Waste Land was added at the eleventh hour as the finishing touch to their labours. Tricoli had at least one release on the Italian Bowindo label whose abiding aesthetic was, I recall, one of supreme bafflement. This one is less of a “question-mark special”, has plenty of fascinating incident layered into the minimal spaciness, and pound for pound it would made a nifty soundtrack for any tourist walking over the Bridge of Sighs.

Sulatron-Records from Hunfeld in Germany has sent quite a few groovnik items this year. To hand I have Electric Orange‘s Netto (SULATRON ST 1102) which arrived 5th September. This four-piece of players make an unashamed effort to emulate the glory years of Krautrock and Kosmische music from the 1970s and immerse themselves fully in that world with 100% commitment, using authentic period instruments – the shopping list of keyboard player Dirk Jan Müller includes mellotron, Farfisa organ, mini-moog, Hammond organ, Fender Rhodes piano and a Leslie speaker, the sort of equipment line-up that reduces many musical instrument fetishists to a quivering bowl of jelly. They’re also skilled players and know how to combine rock-energy with cosmic noodling with ease. We’ve heard from them before, enjoyed ’em, and this release doesn’t disappoint; it may not be especially inventive music, but if you like Krautrock and European prog from the 1970s, you will be in gatefold-sleeve incense-stick heaven within a matter of moments with these nine instrumental noodlers. 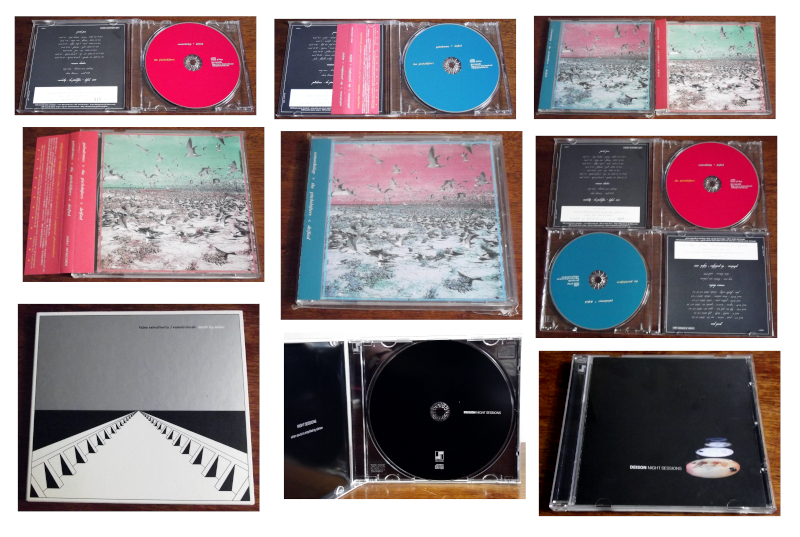 Me Myself an Eye

Ahh, here’s a nice lively jumping bean from Claude Spenlehauer of Myself who personally sent us a copy of Haro! (WHOSBRAIN RECORDS WHB-34) from his home in Strasbourg. It arrived 5th September but was released in May this year. Myself are a European three piece using drums, guitars, synths, bass, and live electronics to create a solid, thunking form of noise rock which is extremely exciting, especially with its chanted and shouty gruntoid-vocals that punctuate the loopy squeals and thuds. Myself play as though their very whiskers are on fire and they also seem to have a severe case of split personality which works in their favour, on the one hand trying for the sort of Neanderthal primal electric noise that might endear them to Sister Iodine, yet also keeping one ear firmly trained on their French 1970s art-rock legacy that includes Lard Free, Etron Fou Leloublanc, and even Magma at a stretch. Wild noise blended with tricky time signatures, in short. Result: a delicious spicy sizzling dish of unkempt free-jazz saxophone whoopness, souped-up stoner rock bass guitar, Math-rock throat-shredding vocals, and a leaden drum sound you could use as the foundation for a ten-storey building. Such energy. As cover art clearly shows, listening to this beasticle is like sweating it out for ten rounds with an angry bull.

After that churning heat-blast, Deison‘s Night Sessions (SILENTES MINIMAL EDITIONS SME 1149) record of ambient electronics is positively glacial and soothing, a big dab of Valderma for my scalded buttocks. For this, 1990s electro-veteran Deison collaborated with a cabal of international Secret Men including Franck Vigroux, Teho Teardo, Philippe Petit, Scanner, Testing Vault, and others. The studio was an obscure rendezvous, everyone wore a cape and slouch hat to get there, and messages were transmitted by code. Track titles like ‘Hidden Orchestra’, ‘Sleepless Train’, ‘Insomnia’ and ‘Black Light’ are not only quite evocative, but are redolent of this album’s themes – the listener is plunged, almost instantly, into a dimly-lit nocturnal environment and starts to hallucinate in a sleep-deprived state, assisted by pulsating lights and the general air of uncertainty. Deison’s sounds may not be 100% inventive throughout, but he never sinks into default-keyboard-setting cliches, and this record does hew very closely to its declared themes and its chosen aesthetic blueprint. A true nightowl, Deison has his best ideas after dark and most of this record was made during the night hours, when he is at his most creative. Verily, a Cesare for our times. This arrived from Italy on 9th September.

Deliver No Evil, Live On Reviled

Received a couple of really great CDs by The Pitchshifters on 360° Records in Japan. Clearly the pair of them belong together – Palindromes (360R41) spelled backwards is Semordnilap (360R42), and the artwork of one is nearly a colour inverse of the other. Once you’ve figured out the abstruse track titling system, and understood that the minimal text printed underneath “resonance chambers” is about as much information as you’re ever going to learn about the band, then prepare for a treat with these delicious miniatures of gritty electropop tunes and instrumentals. Electronic keyboards with lush organ sounds and piping high tones play impossibly beautiful meandering melodies, set to the rhythms of simple pop beats (live drumming, not programmed). The overall sound is filtered through a slightly distorted veil that makes all the music seem nostalgic and distant, like watching a Japanese TV commercial from the 1960s on a tiny TV screen from 50 feet away, advertising a supremely elaborate and gorgeous toy plastic robot which you only ever owned in the childhood of your dreams. This odd music manages to be both upbeat and slightly sad at the same time, often within the same tune, which is a very fair accomplishment, and I do like the way its creators remain at one step removed from us, even to the extent of appearing to be half-absent from the making of the record. The Pitchshifters may or may not be one person, Hideto Aso. This is pop music that’s almost a force of nature, like crystals forming in a secret cave. Lovely packaging, too. The producer of the label, Taro Nijikame, apparently likes The Sound Projector very much and admires my world. Now I admire his.