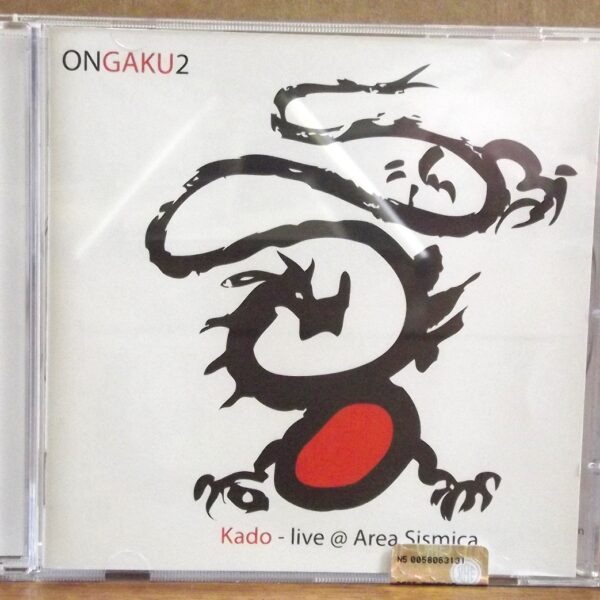 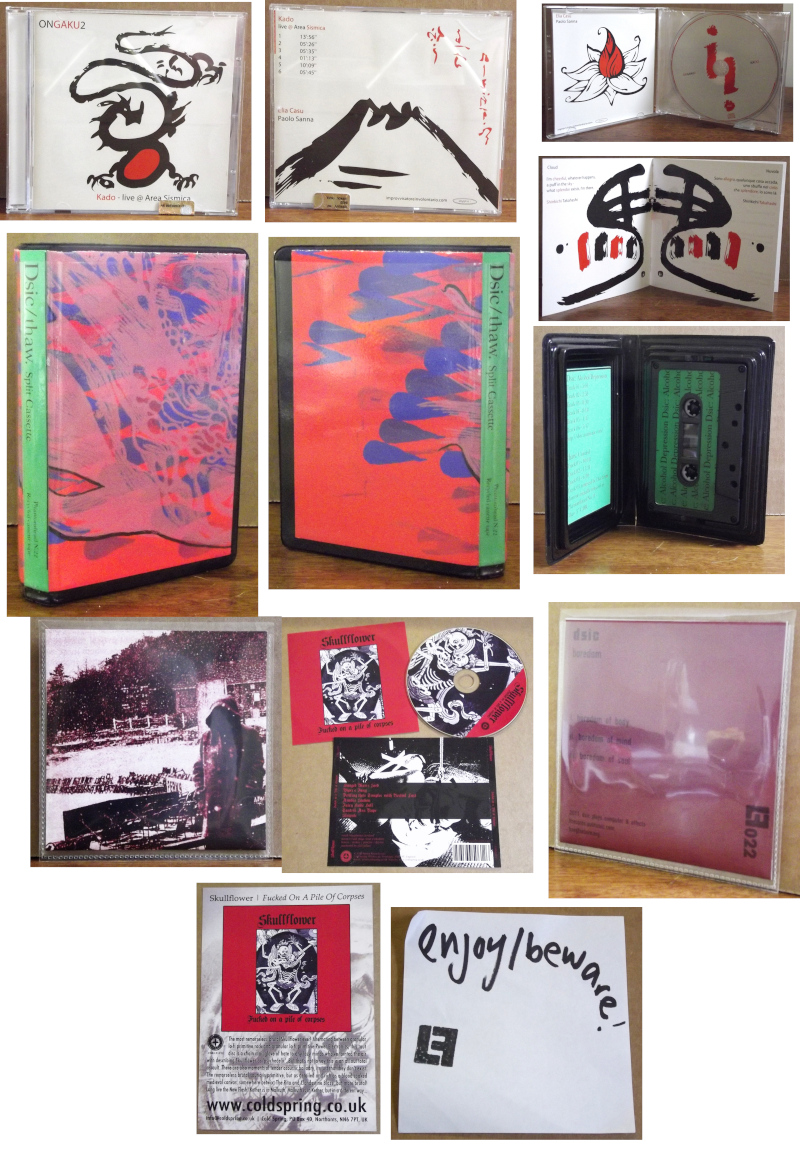 The Italian free-abstract-guitarist Elia Casu sent us a nice bundle of items in June 2011. Here is another one from that envelope. With the percussionist Paolo Sanna, Elia forms the duo Kado and here they are playing Live @ Area Sismica (IMPROVVISATORE INVOLONTARIO 0022) on a date from January 2010. Elia amplifies and prepares his guitar and is not averse to feeding it through some filters, and adding live electronics to the performance; Sanna’s drum kit has likewise been prepared, and between the pair of ’em you’ll barely find a recognisable or familiar noise on the whole of this 43-minute set. That said there is an energetic drum solo in the middle of track three that bucks the trend. They can erupt into explosions of clattery and angrified noise, although most of the set dwells in the regions of the introspective, ploughing cosmic burrows into man’s inner space. Great skill and assurance in the playing, even if you might find it a bit slow and meandery for everyday use. The booklet is adorned with pseudo Japanese calligraphic writing printed in black and red, and there’s a short printed poem from Shinkichi Takahashi. “I’m cheerful, whatever happens,” he begins. While good cheer is not exactly the first emotion that one would associate with this slightly downbeat and ambiguous release, the phrase does endorse the aleatory nature of the music.

Two more items sent here by Dsic which I expect arrived here around July 2011. Dsic, also the label owner of LF Records, appears on both. The cassette item is on Ian Watson’s Phantomhead label (PHANTOMHEAD N.22) and is a split with Thaw, and Dsic occupies all of side one with his six-part odyssey into ‘Alcohol Depression’, employing a variety of methods and textures to generate his wild and extreme electronic music. Earlier records from him were like a roller-coaster or juggernaught as regards their out-of-control behaviour; this set may not have the same relentless impetus, but it’s deliciously oppressive, creating a mood of angsty despair not through shrouded mystery drone, but through disjointed crackling, swooping bursts, and constant digital throbberment nibbling away at the core of your aural capacity like three big white rats. Given the title, could turn out to be the ultimate hangover record, and its therapeutic value means it will soon pay for itself. Thaw’s ‘Untitled’ side shows him opting for two long tracks of grim digital fizzitude, where he cranks the handle on time’s metaphysical hurdy-gurdy and seals the fate of millions. A fatalistic and doomy burr is what he emanates to be sure, cut through with irregular patterns that resemble the wheezing inhalations of a ferocious ogre whose slow-burn grudge against mankind is on the verge of erupting into violent revenge. Dsic gets his musical oar in here too, contributing a remix of the third track which was assembled from parts of a previous Phantomhead release. With a very nice screenprinted / handmade cover, this is a splendid slice of electric misery. Could be the last release from the label and issued on a recycled tape. Probably sold out by now, sadly.

Boredom (LF RECORDS LF 022) is a full-length CDR by Dsic, where over three tracks he undertakes a comprehensive sonic analysis of another paralysing state of mind that afflicts the human soul, His intent is not to bore the listener (there are plenty of people doing that already), but rather to cleanse and exorcise the polluted psyche and rid the jaded mind of these evil spectres, one of which appears on the cover on a wintry landscape hooded and faceless. ‘Boredom of Body’ lasts for a full 35 minutes and is a glorious, energising sweep of layered computer noise that simultaneously condemns and celebrates the crippling psychological effects that can descend upon the unoccupied mind; he creates tight spirals of repeating despair, at the same time empowering us by showing us how to break free of these bonds. ‘Boredom of Mind’ is much bleaker, an emptied-out vista showing a human body being pickled inside an enormous coffee pot that’s percolating its rich brew of futility. ‘Boredom of Soul’ makes use of processed voice loops, degenerating the vox humana into the ugly grunts of a swine-like alien; this is exactly how the rest of humanity appears to the despairing mind, trapped behind the glass wall of alienation. In fine, a strong and potent statement of rawness, almost Art Brut, treading into areas which you won’t find in many mainstream releases of electronic music. No wonder the enclosed note from Dsic simply states “enjoy / beware!”.

Just found an envelope from Cold Spring Records which has been languishing in the bag since 27 July. Not sure how I managed to neglect this for so long as it contains this year’s release from the mighty Skullflower, the full-length Fucked On A Pile Of Corpses (COLD SPRING RECORDS CSR151CD). Last time we dug this outstanding UK rock-noise combo they were stretching out into Haino-like art-music excesses on the amazing Malediction record from 2009, but on this set the quartet of Matthew Bower, Lee Stokoe, George Proctor and Samantha Davies are grinding out shorter, bite-size chunks of grotesque and evil guitar noise across seven tracks which glow with the incandescence of an iron meteor from space. Seriously beautiful melodies emerge from the clashing walls of desolate feedback, extreme guitar howl, murderous percussion, and other nameless screaming effects; the band appear to be creating a virtual witch’s potion and stirring the thick, green broth with a diabolical relish. The enclosed press release enthuses in like manner with buzzwords such as “brutal”, “psychedelic”, “power electronics” and “remorseless” to the fore. Skullflower have a long pedigree (and many changing lineups) in the field of depressive, anti-social UK guitar noise music, but the core energy of this entity is clearly in no risk of burning itself out at time of writing, and the abiding vibe from this record (helped to no small extent by the grisly track titles and death-culture sleeve art) is one of intense and unknowable evil, manifesting itself in a much scarier and ambiguous way than we find on a hundred Black Metal albums with their overwrought and laboured blasphemies. Only tracks five and six are slightly dismaying to me personally, given (a) the unreconstructed filthy titles which are a throwback to the dark days of Whitehouse and (b) the equally unreconstructed and filthy power noise which these tracks pump out like so much raw sewage. My preference is for the first four tracks which present a dazzling blast of dynamic, ultra-psyched, unstoppable guitar malevolence, and the closing cut ‘Sleipnir’ which is a superlative nightmare of colliding elements, an indigestible knot of jarring hellish components that is delirious in its unsettling power. In fine, the whole degenerate disc is a 36-minute descent into hell, pain, death and terror.