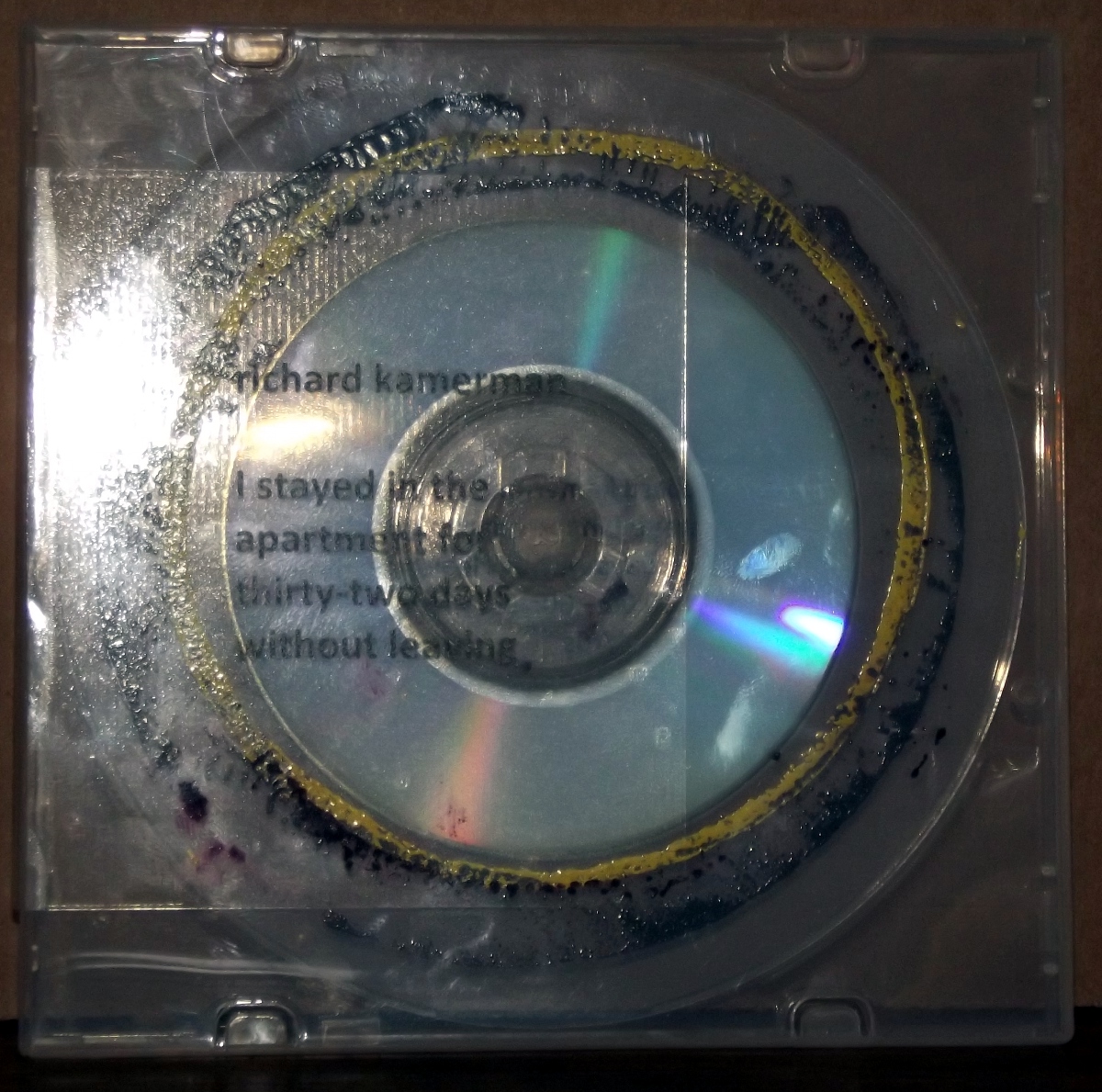 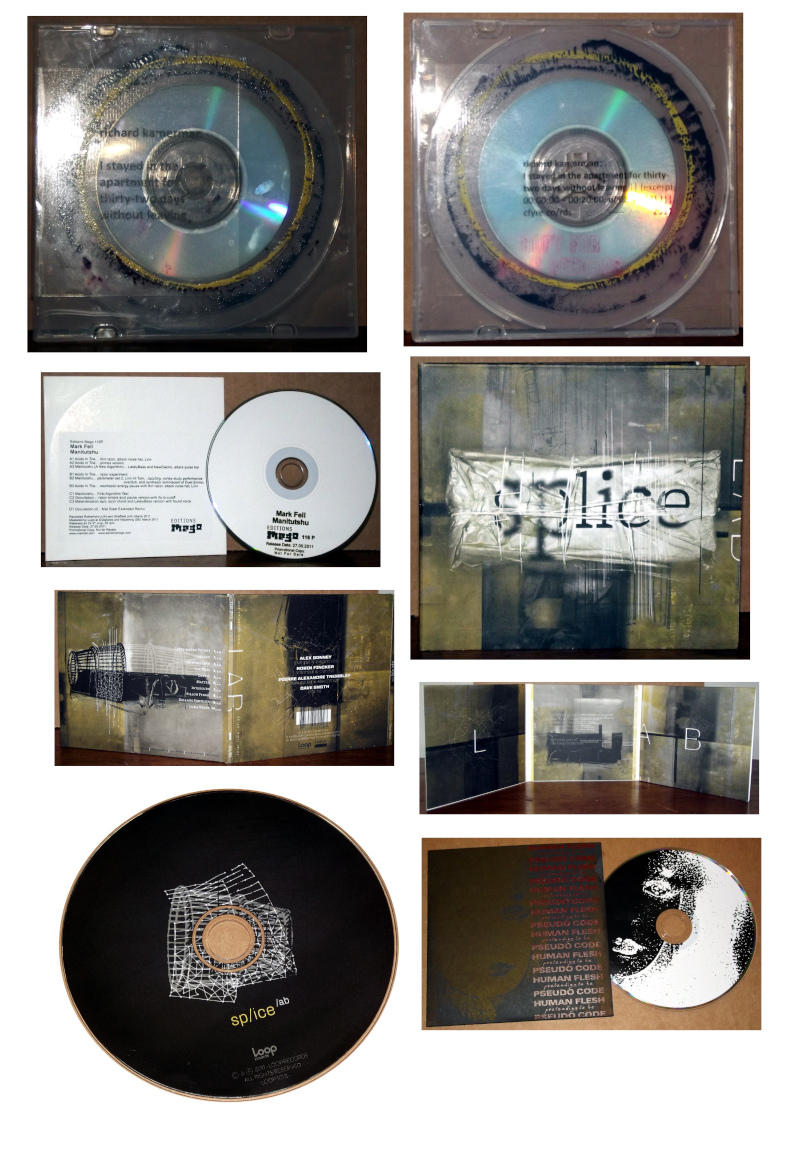 That’s the colour of my room

The proud boast of Richard Kamerman is I Stayed in the Apartment for Thirty-Two Days without Leaving (COPY FOR YOUR RECORDS CFYRF02). To express the degrees of cabin fever, loneliness and internalised urban angst that transpired across his frame, he delivers himself of precisely twenty minutes of digital white-noise rubble on this special 3″ CDR printed with artwork on the non-data area, a presentation which some refer to as the MiniMax format. None but the brave will survive to the end of this extreme, heavily-distorted session of aural torture, a near-blank wall of non-information which is extremely unpleasant, and wherein it’s possible almost instantly to start discerning imaginary voices, music, and other streams of data that simply are not there. If twenty minutes of this brutalism isn’t enough for you, then you’ll be pleased to learn that further extracts from this long-form work (nearly three hours in toto) have been released in other formats on other micro-labels, with further portions planned for the future. A grisly, testing piece of work with no concessions made whatsoever for your listening enjoyment; never has the simple act of staying indoors seemed so desolate, so unappealing.

After that remorseless slab of art noise monstrosity, the antiseptic electronic minimalism of English creator Mark Fell is almost refreshing, a shower of cold steel needles for your beautiful skin. Matter of fact his music has that effect at any time of day. We were pretty impressed by his UL8 record in February, and Manitutshu (EDITIONS MEGO 116) is apparently not wholly unrelated to that release. As process-based as ever, Manitutshu began life as a set of synthesiser presets which Fell was commissioned to build by Errorsmith. Fell then took his original programs from the UL8 record and fed portions of them through these new presets, following a process which I don’t fully comprehend, but the full story is there on the Mego web page for those who have a handle on such things. Of these ten tracks, I suppose I find most fulfilment in those pieces which deliver hyperfast and dense patterns of sonic information, almost forming melodies or tunes as they do so, and perform like a digital version of Conlon Nancarrow’s player piano as regards their sheer impossibility. (Apologies if that comparison has already been done to death!) Albeit his tones are inhuman and robotic, you can still decode the residual 2% of carbon-based lifeform that originated these cyber-patterns and which resides at the heart of our shiny new future. The titles also indicate there are intended resonances between this music’s processes and those of techno and dance music, filtered through further screens of irony and distance, and for those who want to turn their dancefloor into a teflon-coated frying pan about the size of the Wigan Casino, this release exists as two 12-inch vinyl platters which spin at 45rpm.

Alain Neffe is the Belgian musician who has managed a cassette label called Insane Music since 1982, and published a long string of compilations Insane Music for Insane People containing experimental electronic musics from underground recessess across the globe. A man with many aliases, he has also recorded as Human Flesh and as a member of Pseudo Code. The current release, credited to Human Flesh and called Pretending To Be Pseudo Code (PLINKITY PLONK PLINK 029) documents an occasion in September 1982 when Neffe was visited by Guy De Bièvre, and since the other members of Pseudo Code didn’t show up and the instruments were all ready and set up in the studio, the two of them spontaneously recorded this track together. 43 minutes of ‘Playing With Another Guy’ results. It’s a fairly odd episode of string synths, organs and numerous other synthetic keyboards producing a sort of jolly upbeat 1980s anthemic electro-pop music, but with melodies and sounds going slightly askew at every turn, perhaps due to the “special wiring / effects” which Mr Neffe refers to. His saxophone work is also quite vicious, and there’s no doubt in my mind that he could have laid down all the backing tracks for any given Legendary Pink Dots record if he felt so disposed. Guy De Bièvre adds acidic scrabbly guitar playing, but his star turn is the singing: he wrote a set of grotesque lyrics, mostly metaphysical slogans, which he declaims and shouts in non-musical fashion at strategic intervals. All very odd, a bit like encountering a lunatic from Speaker’s Corner holding a beatbox stacked with tunes by Wham, Depeche Mode and Matt Bianco, playing at the wrong speed on a wobbly tape.

Splice are a four-piece of improvising players featuring the London trumpeter Alex Bonney, the French-born sax player Robin Fincker, the electro-acoustic composer Pierre Alexandre Tremblay from Canada, plus the drummer Dave Smith. The common ground they share is Huddersfield University, where this was recorded, and the Loop Collective of which they are a part. On Lab (LOOP RECORDS LOOP 1013), they concoct some fascinating episodes of rich and full music that tends to refuse easy categorisation; despite the mix of traditional instruments with live electronics, I’m pleased to see they can’t be labelled as “EAI” very easily. The opener ‘Caffeinated Drinks’ is slow, droney, almost trance-like in the way it pulls you towards the calm centre of its strange resonating mixed chord, but then its follow-up ‘Cortege’ allows the bass guitar (Tremblay) and drummer to cook up a slow rhythm that’s not too far apart from stoner rock, something that sounds distinctly odd when mixed with the melancholic romantic toplines of the brass section. Some of the following pieces are just about identifiable as “jazz”, albeit a very skeletal and elliptical and highly stylised form of post-everything bebop, and on other occasions the very full sound of the wind instruments makes for a slightly cloying effect; but these are captious remarks. There is some very original noise-making going down here, and the combo work exceptionally well together, almost like a looser version of, say, Chris Burn’s Ensemble from the 1990s. Good work, one to investigate.