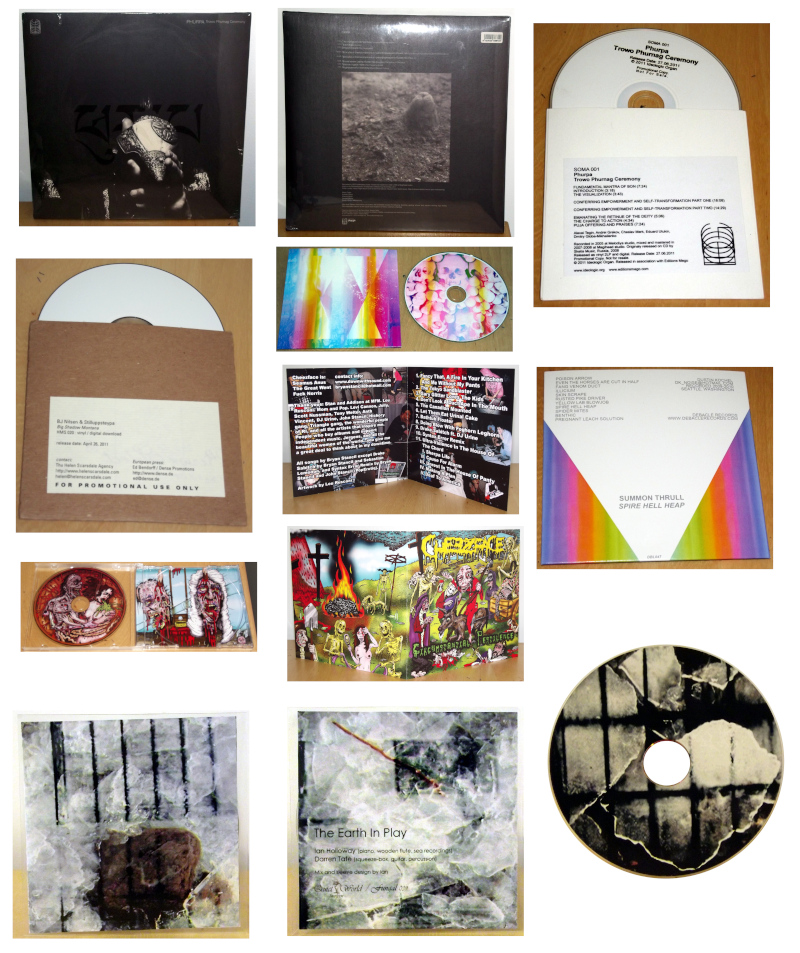 The Buddhas of Moscow

We’ve had this Phurpa item on a promo CD since about June this year and then recently we were sent a vinyl edition of same (which remains sealed at time of writing). Trowo Phurnag Ceremony (IDEOLOGIC ORGAN / EDITIONS MEGO SOMA 001) is a double LP by a group of contemporary Russian singers applying themselves to the study, research and performance of an ancient form of Tibetan Buddhist ritual music. Alexei Tegin and his four men play traditional ritual horns and percussion instruments, but their most sonically astounding tour de force is the deep-bass overtone chanting, which they perform very slowly, using a limited range of notes, and forming growly and groany vowel sounds that are extremely alien to the ear. From these five mouths there issue intense reverberations which, given time, could probably grind away an entire mountain. There is no denying the spiritual depth to this music, the ritualistic effects of the chanting meditation, but at the same time it’s also quite terrifying to listen to. Tegin and his crew have been studying this area of music for about fifteen years, they also have some familiarity with ancient musics of Egypt and Iran, and the sleeve notes here provide a condensed history of this particular strain of music which belongs to the Bon tradition, an ancient pre-Buddhist religion which came from Central Asia. While not explicitly stated anywhere, one senses quite strongly that these early “ancestral cults” and “shamanic rites” are the real locus of interest for Phurpa, and they may indeed believe that something powerful and transformative was lost after the arrival of Buddhist monastic ensembles from the tenth century onwards. Further clues are provided by the quasi-mystical titles on the double LP such as ‘Conferring Empowerment and Self-Transformation’ or ‘Emanating the Retinue of the Deity’. Originally recorded in 2005 and released in Russia in 2008, this reissue is the first release on Stephen O’Malley’s Ideologic Organ imprint, and it’s also another exotic cultural ingredient in the American’s musical melting pot; hopefully his endorsement will send a few Sunn O))) fans scuttling in the direction of this very unusual release. In some ways, it’s almost the vox humana acoustic equivalent to the slow and deep guitar drones that O’Malley has made into his signature sound; and this ritualistic chanting feels closely attuned to the Sunn O))) visual aesthetic, the “cowled performances” and the photographs of hooded figures performing strange rites on their album covers.

Another vinyl release which, for me, only exists as a promo CD in a chipboard cover, is Big Shadow Montana (HELEN SCARSDALE AGENCY HMS 020), an ethereal drone LP in two parts made by the team of BJ Nilsen and Stilluppsteypa. I’ve been slow to make any lasting emotional connection with the work of Icelandic experimenters Stilluppsteypa, but this monolithic mantra-like slow-spinner has enough layers of interest to warrant further delving, a task for which I sense I’ll need a pickaxe and a snow shovel. Hard to identify how this rich mix of vapour-trailing murmur-music was generated or assembled, but it seems analogue synths play a large part, spun together into a gossamer tapestry that stretches on for miles across vague terrains of whiteness. They must have done their editing with a set of miniature hairbrushes, so perfectly are the layered sounds elided like strands of silken hair. This LP is not as quietly wispy as Mirror used to be at their glacial high-point, nor as treacly as the current crop of American synth bands who are working hard to produce their personal reinterpretations of Alpha Centauri mixed with Klaus Schulze’s Cyborg. Inevitably in listening to it or writing about it, I suppose we’ll both be grasping for the usual basket of mixed metaphors that involve weather, landscapes, and empty skies. In fact, I already have. Released in April 2011. Official repro of the sleeve is here.

The Sea, The Sea

Coincidentally, ice and rock are photographed for the cover of The Earth In Play (QUIET WORLD FOURTEEN / FUNGAL 039), an item sent to us personally by Ian Holloway from Swansea. A collaboration with Darren Tate of Monos who provided the guitar, percussion and squeeze box music, the record was made from the piano and flute of Holloway, mixed with his recordings of the sea. You would hardly realise any of this from hearing the music, which is a serene and processed drone where such musical interludes as appear are heavily treated, minimal, ambient, and unobtrusive. Curiously divided into two tracks of five minutes and 30 minutes, it’s the album’s second track which contains the most development and evidence of patient hand-crafting; it moves along slowly from a warm and comforting tone to an atmosphere that is far less reassuring, with vague streaks of darkness appearing in the skies above, and a general air of uncertainty. Holloway reports “it took me about 8 months to get the mix how I wanted it and I’m very pleased with the end result”. Rightly so; it’s a finely-burnished piece where every nuanced sound carries weight, and means something to the overall effect. As ever, ecological sensitivity is the subtext of the work, and many of Holloway’s records exhibit this pleasingly ambivalent relationship with the environment.

The Spires of Pandemonium

Spire Hell Heap (DEBACLE RECORDS DBL 047) was released in July by Summon Thrull, who is the Seattle-based synth player Dustin Kochel who also performs as one third of Physical Demon. Their Hyperdrift CD from 2010 was a stirling example of nightmarish industrial noise, and Spire Hell Heap hits some of the same marks with its unstinting use of distortion, maltuned synths, brutal repetitions and percussive thuds, thumping and buffeting tape loops, and its peculiar air of imminent menace. However, Summon Thrull is also occasionally capable of tempering his blasts of foul weather with sweeter tones that peep through the smog and clouds like flashes of blue sky. Mostly though, he rules his domain with an iron fist and keeps his subjects oppressed under the heavy yoke of dreary noise. Despite psychedelic pastel shades of the cover art, this is a dark and grim album.

Circumstantial Pestilence (MIND FLARE MEDIA MFM005) is the first CD release by Cheezface, an alter ego that conceals the name of Bryan Stancil, a man given to delivering uncompromising and confrontational near-naked live performances that involve assaulting the audience with extreme beat-based electronic noise, advancing his intentions still further with his use of a grotesque horror mask. Stancil is determined to prove that, when it comes to music software, there’s no pushing him around and he’ll willingly arm-wrestle any computer program in the house. The release comes with plenty of stinky cartoon artworks by Lou Rusconi, where he effectively remakes Breughel’s The Triumph of Death as a sick inverted Disney epic for the front cover, and gleefully spews out plenty of blood, death, fire and maggot-infested images elsewhere on the package. The track titles promise equal amounts of chaos-filled mayhem as they cheerfully rip through the usual taboos, fecal and urinary imagery to the fore, and while I didn’t find the music quite as wild or shocking as all the above might lead one to believe, there’s plenty of strong imagination on offer. The electronic sounds are ugly, sullen and grisly, the samples are sparingly used and actually quite witty with their scatological asides, the beats are programmed to deliver insane impossible tempos, and each piece keeps shifting direction and timbre with the restless energy of a school of hungry Piranha fish. 24 minutes of unkempt, ill-behaved oddness.