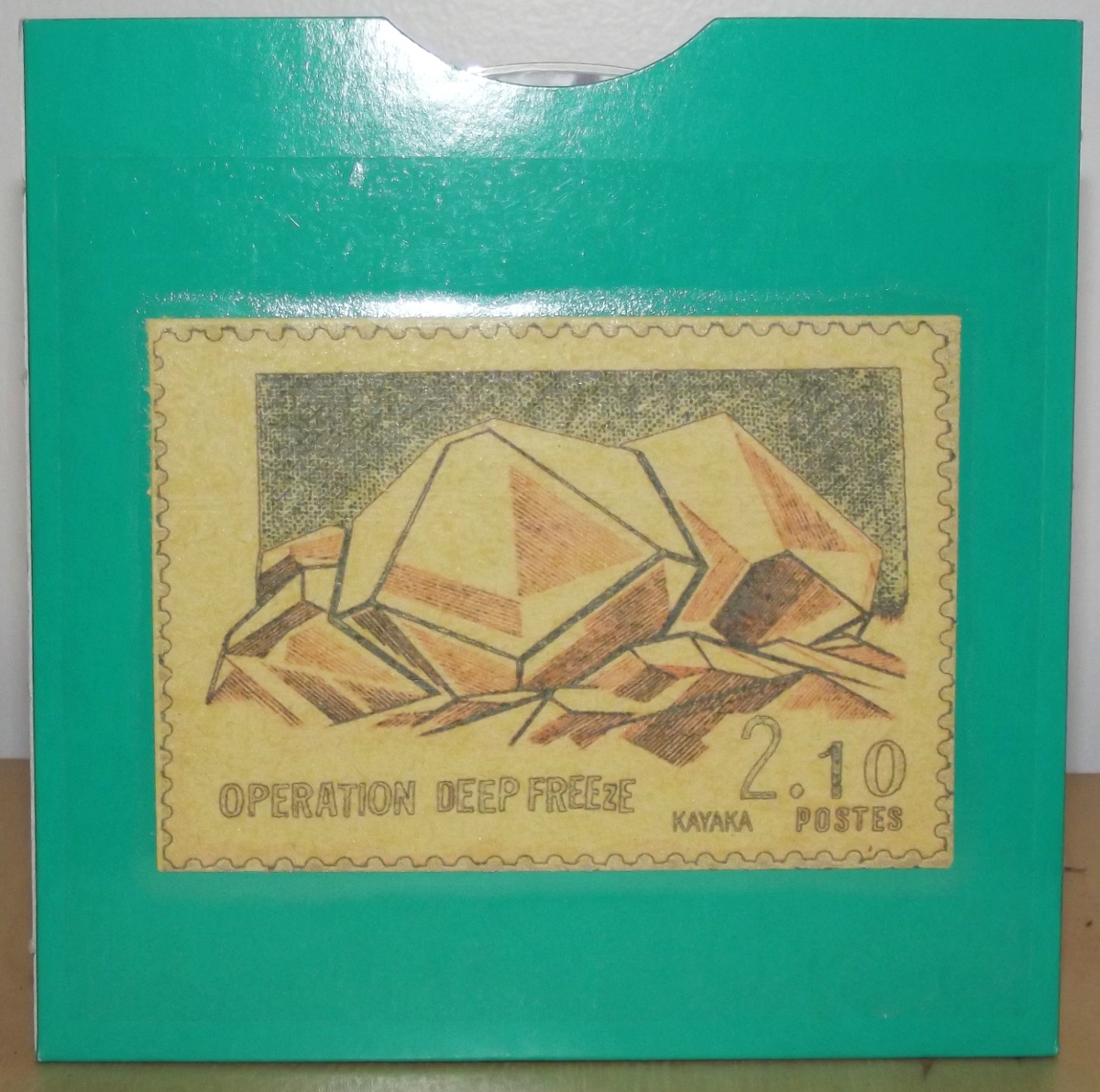 Kayaka is the London-based electronic destructo merchant Kaya Kamijo. We last heard from her in June with One Man’s Hands, and now here be Operation Deep Freeze (MANTILE RECORDS #021), a CDR set which may or may not have been produced as a tour-only item. Actually she’s not so much a destructive creator as one who has a very unusual and personal sense of how to assemble and de-assemble her building blocks of sound, resulting in a deliciously ramshackle feel – one ill-fitting brick heaped on top of another, yet creating rollicking rumblers of disorganised noise-music which roll across fields of grass as smoothly as a broken one-man ploughshare team. Of note here: the title track, with its sampled voices and fractured beat-box haphazardness, competing against tasty synth doodles and guitar stabs; ‘Feeding Centipede at a Pond of Blood’, a jumble of idiot-savant proportions which confirms the creator’s ingenious bricolage method with its mixture of TNB-styled rubbly noise, diseased heavy metal guitar, and science-fiction space drones; ‘Like as Two Palms’, with its sickening use of reverb to add extra buffet to a pair of metallic boxing glove beats; and ‘Vulcanized Ghaut’, which comes across like a pitched battle between warring percussion groups (dub, calypso, rock, pop) inside a fetid swamp of sex-craved Theremins in heat. A surreal and very imaginative dollop of exciting home-made computer cut-ups.

Another Japanese sound artist, much more self-consciously “artistic”, is Koji Asano. At one stage I felt like I couldn’t move for the number of self-released CDs this guy was releasing and sending us; he put out ten titles in 2001 alone, one of which was a four-CD set. That said, he tends to work each idea for everything it’s worth and issue the results as single-track statements of minimalism which depend heavily upon duration to achieve their desired results. Solstice Eclipse (SOLSTICE 045) is no exception, and it’s both compelling and unsettling at the same time. For best part of 50 minutes we are drawn into a slowly changing world of fuzzy rotating clouds, eerie pulsating lights, and a wheezy organ drone of some sort that refuses to settle down into any recognisable root note. In fine, Koji has processed and denatured this music out of all proportion, creating a slightly distorted and misted-up balloon of ambient noise that produces instant fogging inside the brain-pan. All sense of direction is occluded, and we know not where we travel next, sealed inside the passenger section of this jet airliner from another dimension. Not unappealing actually, but it’s the sort of music that constantly deflects the brain from settling down into a steady state of enjoyment, and the sense of befuddlement it produces is more or less permanent. Ambient relaxation this ain’t! Arrived here 14th September, with a free Koji Asano pen.

The Kammerflimmer Kollektief is a trio (Johannes Frisch, Thomas Weber and Heike Aumüller) who play bass, guitars, synths and electronic loop rhythms, quite often showcasing the torchy voice of singer Aumüller. They work hard to bring new life to the Staubgold “signature sound” by combining live playing with lovely electronica. I didn’t care for everything on their Teufelskamin (STAUBGOLD DIGITAL 16) album, although the long track ‘Teufelskamin Jam #1’ is a quite nice example of how rowdy free-form guitar antics can creep into their otherwise rather bland sound. Elsewhere, I find they’re not much more exciting than a cocktail lounge pseudo-jazz combo creating “tasteful” Sade-like backdrops for Aumüller’s breathy vocalising.

The Harrowing of Hell

The UK combo Joinedbywire are always welcome here with their new releases, and here’s one in a textured cloth cover called 48 Space Platform (STRIATE CORTEX S.C. 43). Their particular talent is to create long and harrowing stretches of angsty electronic noise by means I know not, but they are more like personal exorcisms for the creators than anything else; they won’t stop delving away at their buried psychoses until everything is rooted out and laid bare. Their multiple approaches to sound generation are very strong and imaginative, making use of simple electronic crackle and distortion, loops, pattern generators of all sorts, all undercutting the rich musical guitar and keyboard drones. Everything comes out feeling rustic and home-made, rather than anonymous roaring noise that threatens to flatten the listener like a fleet of heavy artillery. My favourites here are ‘Thud Life 1’ and ‘Thud Life 2’, which have the effect of imparting instant unrest in the mind; ‘Colossus Thunderer No 1 vs The Furrower’ is less agitational, and works mainly to implant a huge sense of doubt and disbelief. There’s also ‘Drym Lane Atomball’, a 16-minute elegy of loss and remorse which closes the album. Almost every note this band plays is underpinned by this genuine sense of tragedy and futility, and the emotions just pour out of their instruments. Released August 2011 in an edition of 50 copies.

Bewitched Concert (INTONEMA 002) is a record of improvised music made in Saint Petersburg in late 2009: the quintet is an international one, comprising the American singer Thomas Buckner, the Polish flautist Edyta Fil, the Finnish cellist Juho Laitinen, and two Russian players Ilia Belorukov (saxophone) and Alexey Lapin (piano). Many, if not all, of these players have an academic background, and the music does indeed feel (as sleeve notes indicate) a bit more like classical avant-garde atonality than free improv. Every movement is slightly awkward and stiff, and each note has a precision and clarity that you wouldn’t always get from any European improviser who has tended to follow the free-jazz route to arrive where he is today. If that sounds like a criticism, it’s not intended as this music is actually extremely absorbing and beautiful; and the tension between improvised music generation and classical intonation and note-production keeps the performance on a knife-edge throughout. For the opening track, oddly called ‘Epilogue’, they sustain that tension for over 20 minutes through resonant string scrapes, eerie flute trills, unexpected piano notes hanging glacially in the air like icicles. Best effect of all: the near-operatic voice of Buckner making wordless and guttural plaints, which when joined by singing voice of Laitinen will make you feel you’re an intruder in a land of ghosts. Hence the title, I expect; the set does have quite a supernatural aura. Brilliant cover design which suggests an inescapable haunted forest; open the gatefold to reveal cutout shape of a man lost in the middle of it.