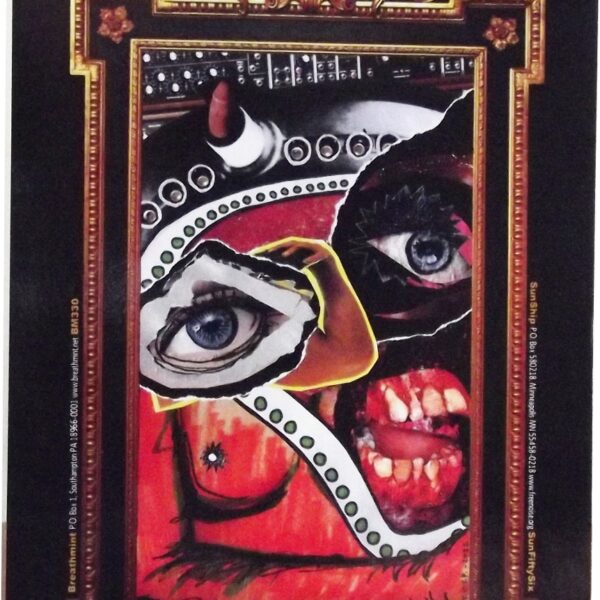 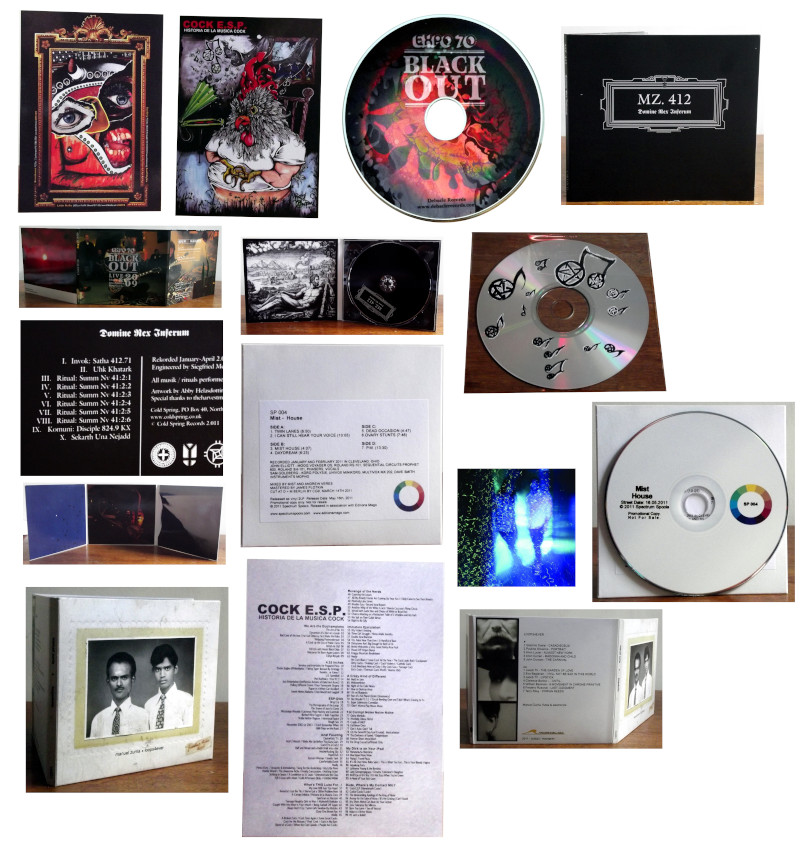 Expo 70 are Justin Wright and Matt Hill. On Blackout (DEBACLE RECORDS DBL054) they play a couple of half-hour cosmic improvisations using guitar, moog, Korg, drum machine and bass guitar, doing it live in parts of New York while they sat on the floor wreathed in a crepuscular haze. Pretty good mind-numbing drone and proggy sludge pours out of their set-up, resplendent with the characteristically “thick” sound of many experimental rock and prog LPs from the 1970s, and you can almost imagine the band travelling in time to the Osaka World’s Fair from which they take their name, only to be greeted with bewildered looks and numerous Polaroid flashes. Especially effective is the layering of insane synth curlicues on top of Stooges-like guitar riffs that chunter away insistently until dawn breaks. The first track is the fugged-up rockin’ beast, the second one drifts more towards the New Agey and ambient side of their krautrock collections with its languid echoplexed guitar licks on top of melodic keyboard inventions. One of three releases from the ever-productive Seattle label which arrived here 14 February 2011.

More missives flying out from the contemporary American synth-playing retro-scene that’s spreading across the continent like the silver flying glove of Klaus Dinger. Mist have an entire double LP called House (SPECTRUM SPOOLS SP004) on which John Elliott and Sam Goldberg play their Moog Voyager, Korg, Roland and Prophet synths, while Dave Smith adds something called “instruments morpho” which may be a form of post-production which equates to what Dr Moreau is to surgery. Nothing unpleasant about this rich and melodic instrumental music, which is almost indistinguishable from any given record released on the Sky Records label between 1977 and 1987. The sound of Mist is ultra-clean and the players clearly relish the possibilities afforded by their filters and sequencers, filling every available moment with incident and flourish.

I’ve kind of lost track of which point we have reached in the MZ.412 reissue programme from Cold Spring records, but presumably a lot of lovers of extreme occult-metal horrendousness have been made very happy in the last 12 months. Domine Rex Inferum (COLD SPRING RECORDS CSR145CD) is another one in the set of works masterminded by Kremator, and was originally issued in 2001 on Cold Meat Industry in Sweden. This one isn’t so heavy on the sheer sonic violence as others I’ve heard, and it stresses the ritualistic and curse-spinning side of this bleak noise project, most of the music amounting to a set of very ominous low-rumble synth growling and equally ominous percussion rolls. Even the titles, with their combination of strange made-up words in unusual languages with numbers and punctuation lined up in a very particular order, are as precise and deathly as a warlock’s spell or witch’s receipt. Governed by strange and unpredictable dynamics, this music has a terrifying weight and authority, and is not afraid to keep the listener waiting for hours in the corner of a cold marble temple set in a grisly wind-swept plain while we wait for the next fearful event to pass before us. Sheer desolation and abandonment will descend and sit heavily on your soul. As such, all these MZ.412 records make most “Ambient Black Metal” releases look pretty ineffectual.

Cock E.S.P. is one of the “big names” of the underground American noise scene, a force of nature set into trundling motion in 1993 in Minneapolis and currently involving Emil Hagstrom, Elyse Perez, Matt Bacon and a host of imaginary members with absurd pseudonyms. It’s thought they took their name from part of a Hanatarash release, and to this day they’re doing everything possible to keep alive the flame of chaotic Japanese theatrical noise, in a way that even Boredoms have long since abandoned. In May 2011 Emil kindly sent us a copy of Historia De La Musica Cock: A Tribute to Experimental Music 1910-2010 (SUNSHIP SUN56 / LITTLE MAFIA LM078 / BREATHMINT BM330), a powerful tour de force that at once sends up, mocks, mutilates and celebrates the history of free music as it’s been manifested in the 20th century Western world, and as such it contains insane pastiches and parodies of (for instance) free jazz, punk rock, psychedelic rock, krautrock, avant-garde composition, cut-ups and sampledelica, and even noise music itself. The resultant splintered and mosaicified record, realised with the help of a significant number of guest noiseicians, is an unparalleled act of auto-cannibalism, the sort of thing you’d expect from people who have incredible record collections of insane and iconoclastic music, yet who are often seized with a mad impulse to throw all that rare and important vinyl onto a bonfire and dance around the crackling flames as they watch plumes of acrid black smoke rise into the air. There are 99 very short tracks of intense energy and hysteria, they’re divided into eleven episodes arranged as a grotesque parody of the history of music, and the titles are packed with knowing, snide citations and clever détournements; you could use this insert as a baseball scorecard or personal IQ test as you listen your way through the sizzling racket. To put it another way, it’s your map across the sonic minefield where every sniggering aside is another grenade in the face. These titles also revel in puerile humour with their incessant pornography, sodomy, fellatio, scatology, onanism, and of course much phallocentricity and anal-fixated references. I’m not quite sure why I’m using all these two-dollar words to describe this joyful and playful inanity, but you get the idea. An exciting and violent (and hilarious) record and one that ought to reinvigorate your love of music, because only by smashing and destroying the things we love in a bonfire of the vanities can we renew ourselves and return to music with a fresh pair of cleansed ears. Rest assured, Cock E.S.P. will also be thoroughly cleaning out all your other body cavities in ways you can’t begin to imagine. Arrived here 05 May 2011.

For a more respectful, one might even say reverent, approach to the modernist composers of the last century, we might turn to Loops4ever (MAZAGRAN MZ001) by Manuel Zurria. Here, following on from what he did on Repeat! in 2008, the Italian flute player offers 12 performances of compositions by Alvin Lucier, Pauline Oliveros, Terry Riley, Alvin Curran and Frederic Rzweski; pays homage to more recent contemporary maestros such as John Duncan and Jacob TV; and to remain loyal to his home country, the double-disc set leads off with a version of a work by the great Giacinto Scelsi, one of the most severe and problematic of the modernists. A flawless selection, even if the music doesn’t always excite or challenge us as much as I feel it should; quite often Zurria gives the impression he’s lost in his cloudy world of digital recording, loops, electronics and multi-tracked overdubs, simply enjoying the waves of minimal sound for their own sensual pleasures. But his seventeen minute rendition of ‘The Carnival’ by John Duncan is strong, a piercing work featuring the high-pitched whines of a piccolo flute enhanced with loops, electronics, and the laptop of Duncan himself; it’s got a good feel for the mesmerising and immersive terror that I associate with Duncan. Elsewhere, Zurria’s take on Lucier is slow and minimal, and yet not yet minimal enough; for me there’s just a little too much body and volume in the combined flutes and oscillators of ‘Almost New York’. As to Oliveros and Curran, they come out a shade too sentimental and melodic, as though Zurria were reading a bit too much meaning into the musical text. That romanticism does come in handy on the second disc though, when he applies his flutes and temple bells to performing ‘A Movement in Chrome Primitive’ by William Basinski, the New York composer who is an unabashed Pre-Raphaelite of modern composition. By this point I wondered if Zurria would have made a good addition to the Zeitkratzer Ensemble, but I think he’s just too interpretative for that. The enclosed booklet is overflowing with contextual interpolations, with detailed notes on each piece and sometimes short interviews with the collaborating composer.