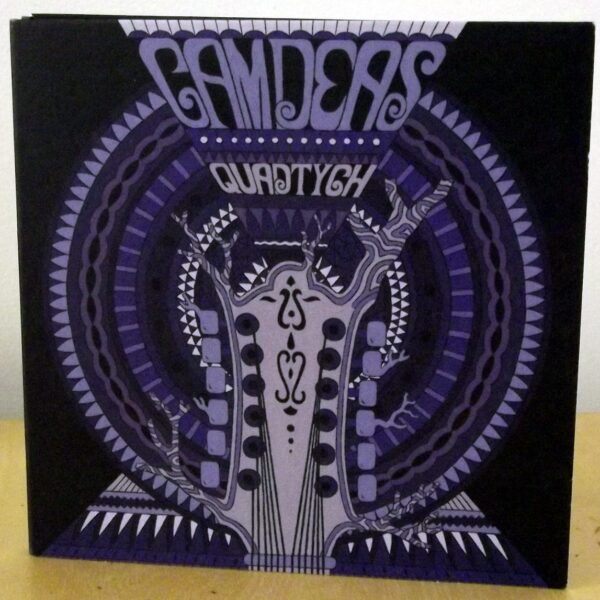 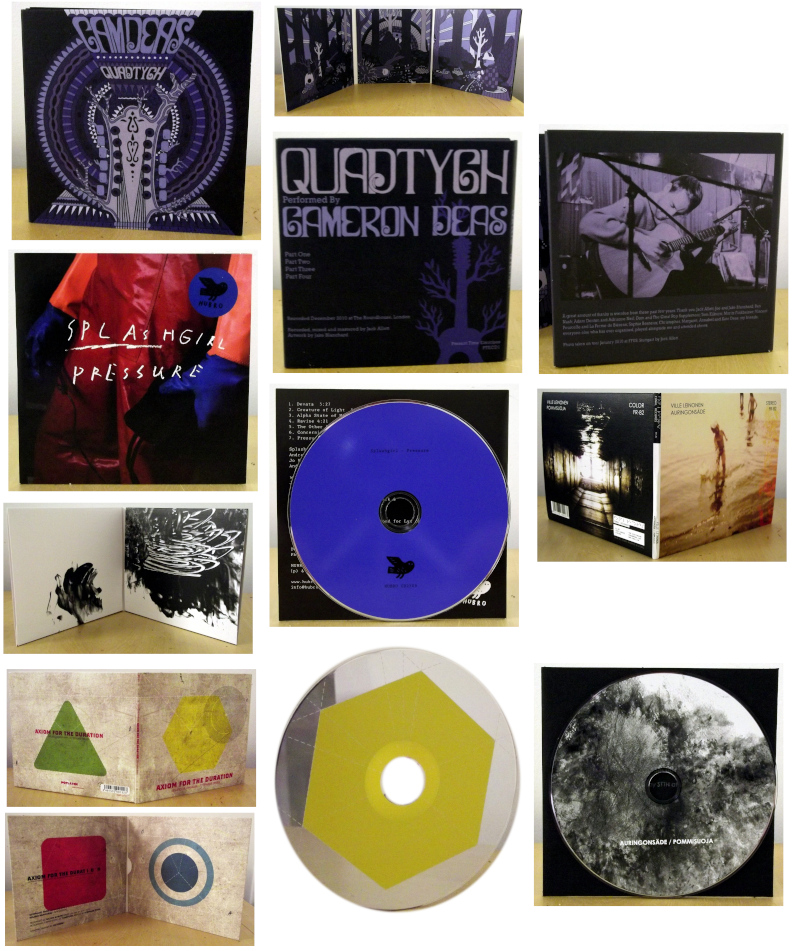 The Tree in the Quadtych

From Sheffield here’s Cameron Deas, another guitar-playing acoustic Englishman worthy to hold his head alongside C. Joynes, with his Quadtych (PRESENT TIME EXERCISES PTECD1) CD which he kindly sent us some months ago released on his own label Present Time Exercises. This is a single work in four parts which unfolds over 70 minutes (look for the vinyl versions!) in which Deas gives himself a very broad canvas to apply his impressionistic, painterly guitar effects. While your man Basho Junghans continues to work his guitar like an orchestra, for Deas it’s more a matter of gradually creating sheets of sound, through a mixture of techniques – scraping, strumming, sliding, and an insistent rubbing method that generates vast clouds of resonating metallicness. On Part One he’s more concerned with creating this gaseous billow of steel-string noise than he is with delivering melodies or picking tunes, and thusly he ushers us into the gateway of his private world. Part Two is somewhat more “open”, and we find minimal forlorn half-tunes seep into an otherwise deserted vacuum of gently echoing stillness. By time of Part Three (and we still have not departed from the single root chord which anchors this album in place) he’s somehow creating a jangling violin-bow effect which he sustains for far longer than is humanly possible, an orchestral drone which supports his folk-tune inflected melodies. Aside from fact that this music must require four hands and eighteen extra digits to play it, I’m astonished by the innovation here, and Deas must have put many years into crafting his unique style, finding this highly individual voice for the guitar. Jake Blanchard did the striking and sympathetic cover art, suggesting not only that twigs and branches grow from the neck and head of a guitar (the music is alive), but also that guitars are already growing in the very trees that are used to make them, and it’s just a question of releasing them from the prison of the bark (music as a natural phenomenon). I’m interested enough now to search for his prior releases on the UK Blackest Rainbow label.

Norwegian instrumental band Splashgirl have their third album Pressure (HUBRO CD2509) sent to us in September, where the core trio play a jazz-like setup with piano, bass and drums, augmented by their own synths and electronics, plus guest players who supply guitar, brass, vocals, and even some live tapework. I like their skeletal sound, but I find the lugubrious pace of these plodders a bit heavy-going after a while. The whole band appear to be in a perpetual state of mild depression about something, but it’s never really revealed what is troubling their sensitive souls. It’s a frustrating listen because none of the pieces resolve in a satisfactory manner; they come and go like passing clouds in the sky. In Splashgirl’s personal weather system, no doubt this vagueness bodes a grey weekend of drizzle and mist.

Ville Leinonen is a famed Finnish singer and songwriter who’s new to me, but Auringosäde / Pommisuoja (FONAL RECORDS FR-82) is his 13th album and he’s been making records since 1997. The album is intended to present “two dramatically different sides” of his complex personality, so the first four tracks are whimsical, acoustic and fey and the remaining four cuts are dark, brooding electronic noise. An idiosyncratic and well-produced record, but I’m steadfastly unimpressed by the whole thing. Ville’s voice is weak and affected, and he feels to me like a refugee from a mainstream pop-synth band like A-ha, Pet Shop Boys or The Communards. Song melodies have been deconstructed to the point where they just don’t matter any more, reducing any verse-chorus structure to disconnected rubble. The acoustic tracks are mannered, disjunctive, and in places quite cloying and twee. The Pommisuoja tracks don’t do much for me either; imagine someone practising John Lennon karaoke vocals over loud and ponderous electric guitar feedback. “Post-apocalyptic blues”, indeed!

Sax Pax for the Duration

Stéphane Rives is the French sax player who I associate with the production of a severe and hard-to-digest sound. On one of the rare occasions when I played a DJ set for a wedding, I spun one of his solo CDs and was soon asked by the distraught organiser to turn it off and go back to playing that nice chill-out music from Oval instead. Rives used to do the quiet-minimal breath-exploration technique along with a number of other European players like Axel Dörner and Robin Hayward, but I think that particular gimmick is old hat now. On Axiom For The Duration (POTLATCH P211) he teams up with the percussionist Seijiro Murayama, and the pair of them have come up with a total bruiser of solid minimalism. Just put this on as loud as the market will bear, and you’ll find yourself being gradually crowded out of your own living room by its sheer physical presence. Murayama could be the driving force behind this merciless method, since he’s been exploring for about ten years the idea that he can control the acoustic space of any given performing area through his sound alone. Depriving himself of food and sleep, he pays attention to every eyelid flicker and throat-clearing action of the audience at every gig he plays, and devises methods to weave these micro-events into his playing, thus “revitalizing the environment”. What he did in this Paris room in May 2010 is certainly a feat to remember, and it’s much to Naxos Bobine’s credit that he recorded it so faithfully. Rives honks in on the action too, by sustaining incredibly long tones (infinitely long) played in the upper registers that defy all rational thought. With one mighty gulp, he can take in as much air as is consumed by the motorbikes of Hong Kong in a single day; he unleashes these currents from his capacious lungs with the rigid control of a pressure valve such as you might find in an industrial-sized refrigeration unit, while his talons maintain a rigid clutch around the neck of his soprano sax. For a full 56 minutes, these two torture-meisters don’t rest for a single second as they issue their monstrous wall of humming and piercing with the slow deliberation of art gallery assistants executing a Sol Lewitt pencil drawing on the walls. And while we’re on the subject, dig the nifty geometry artwork for this release by Octobre. Just great!