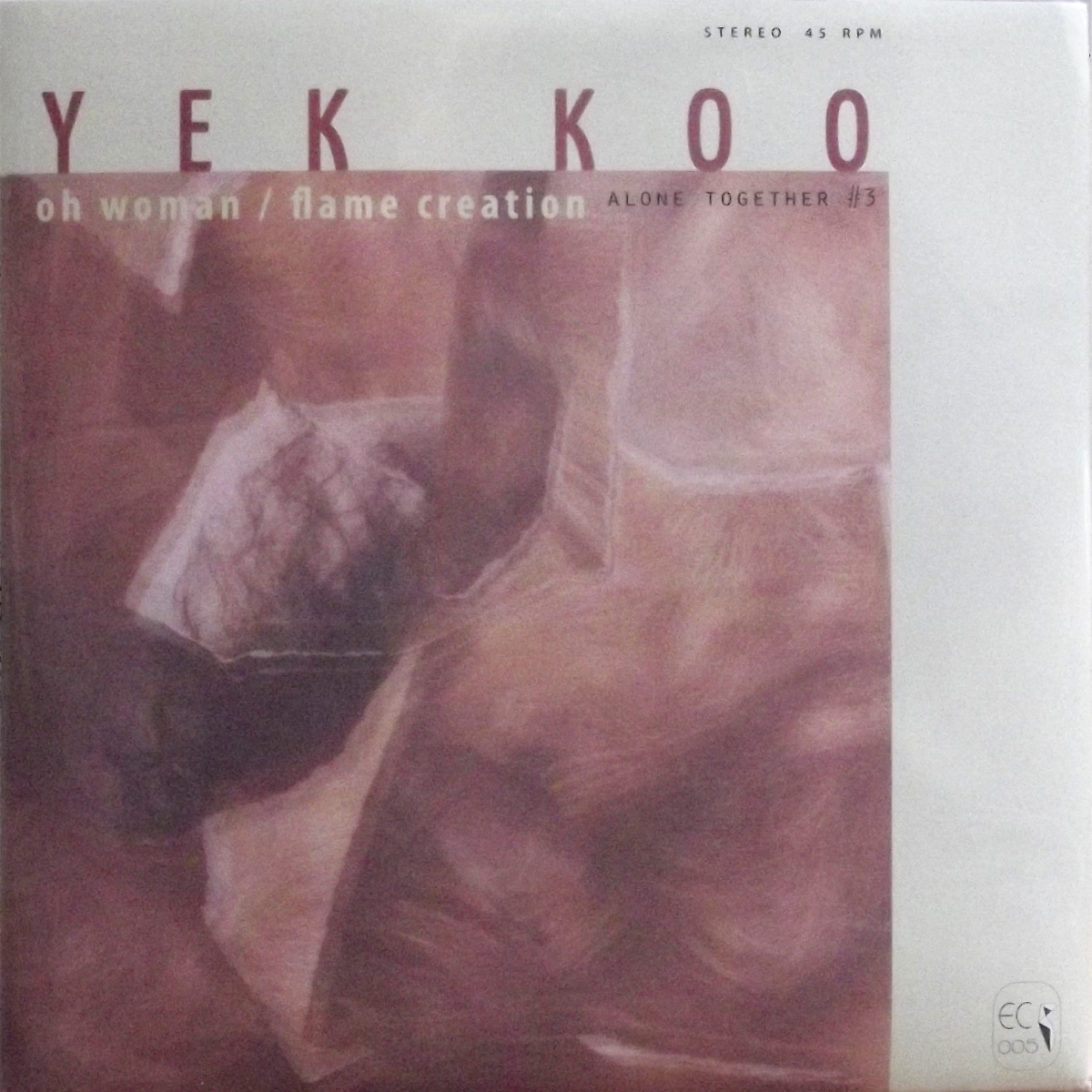 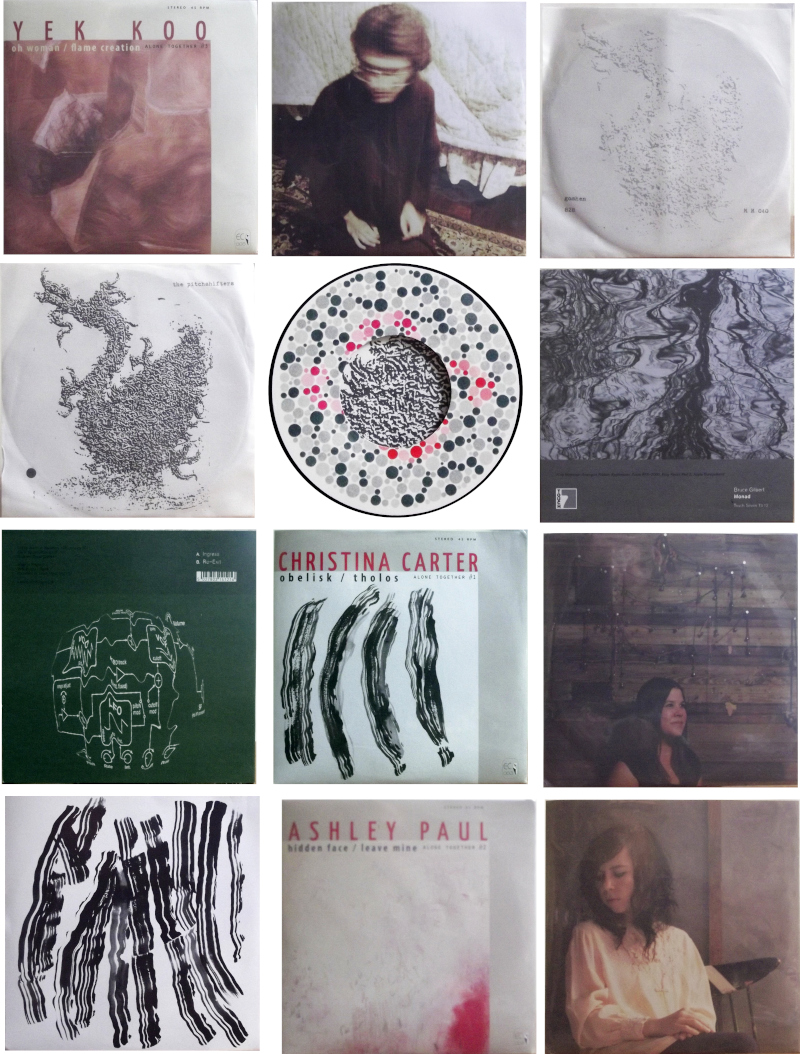 Here is a round-up of many of the vinyl seven-inches to have reached us in 2011. The post is so long we present it in three parts. The Pitchshifters have two near-perfect pieces of intellectual Japanese synth-pop music on Goshen / 828 (MEEUW MUZAK 040). The A side is a romantic instrumental barely shading into ambient tones, while the B side uses quirky beats and quirky melodies. Hideto Aso makes all his work with cheap keyboards and equipment that delivers a finished production that exists two or three notches below the ultra-polished sound which so many Jean-Michel Jarre followers crave. Thus does Aso inject much humanity into his music. Some perceive him as a modern antiquarian or a primitive futurist. We heard two fine CDs by Pitchshifters this year, but his enjoyable music sits well on the 45rpm format.

Bruce Gilbert‘s Monad (TOUCH SEVEN TS 12) is the 12th in the series of the Touch Seven releases, 45rpm singles of art music that are packaged in sturdy card sleeves with spines, as though they were LPs. For ‘Ingress’ and ‘Re-Exit’, this English hero of gallery art, modern music and post-punk rock greatness creates two mesmerising pieces of synth music on his Korg Monoton and other equipment, a full list of which appears on the front cover. Wozencroft’s wobbly vision of trees reflected in a rippled pool suggests a network of information (black twigs and branches) going haywire, an image which is picked up on the back cover which shows a synth programming diagram distorted in Photoshop. Gilbert first utters a simple analogue drone, then a slightly more menacing throbber on the flip. Two distilled examples of supreme electronic music in less than three minutes each; the compression of information may be what has earned this music its “monad” status.

We received three excellent releases from California on the Emerald Cocoon label, in the series Alone / Together. Among other things, the series aims to highlight the solitary aspect of playing records – “home alone you spin the disk”, yet also stresses how an artist can communicate with you through music, even though both parties still end up being alone together at the same time. I like the notion that each record is a “recording hanging unfinished, waiting for the listener to start the conversation” – that certainly strikes a chord with me. Without embarking on an essay on the subject, I have long believed all art to be a two-way process and have actively sought out music (art, books, films) which allows space for the audience to participate in some way, as opposed to music which does all the work for you and provides all the answers flowing in a single direction. Christina Carter‘s Obelisk / Tholos (EMERALD COCOON 003) was made simply using small bells and her own singing voice intoning wordless chants very gently – and there are the bells string on the wall behind her in Giddings Texas, half sculpture, half ornament, half instrument. With many contemporary American artists such as Fursaxa and Pocahaunted still wishing to invoke a vague and non-specific sense of “ancient ceremony”, Carter succeeds with something much more heartfelt with far less hoo-hah and pomp, opting for quietness and intimacy instead of full-throated chant-wailing. I have a sense of ancient history as rewritten from the female point of view.

The second in that series is Hidden Face / Leave Mine (EMERALD COCOON 004) by Ashley Paul, the talented New England musician whose mysterious and fragile solo work we have a lot of time for. Using guitar, saxophone, percussive cymbals called crotales and her own voice, she ekes out her musical information in small broken phrases, as if somewhat uncertain herself of where the process will lead her. Yet the results are very satisfying. It’s as though she is carefully drawing a map, for her own use, of unknown territory, slowing circling in on the destination. I’d love to understand more of her compositional process – I have some idea of how it might be possible to approach writing a song, but Ashley Paul seems to be building songs backwards, having taken apart their constituent elements and refashioning them in a strange new way. Her mother Gayle did the cover artwork, and the photo is by the New York musician Eli Keszler, with whom Ashley has often collaborated.

Third in the series is by Yek Koo, the solo project of Helga Fassonaki from Los Angeles who was also part of Metal Rouge. Here she offers two songs ‘Oh Woman’ and ‘Flame Creation’ (EMERALD COCOON 005). Where Carter and Paul have opted for quiet reflective minimalism and a rather restrained tone, Yek Koo’s record is comparatively lush, complex and upbeat. Through layers of rhythm loops and distorted guitars or synths (I can’t tell which), we hear her highly-processed singing voice making a sort of keening chant out of her own lyrics, and arriving in our ears from such a distance it’s like she’s singing from the bottom of a valley two miles away. The surface feel of this disc is rather bleak and weathered, yet both the songs remain uplifting anthems – though anthems to what, I can’t say for sure (hard to decipher the lyrical content). Complex stuff. Now I’d like to look for her 2008 solo album on Digitalis, which is sure to be sold out. Come to that, all of these Alone Togethers are limited pressings (300 copies), so be quick in nabbing your copies.