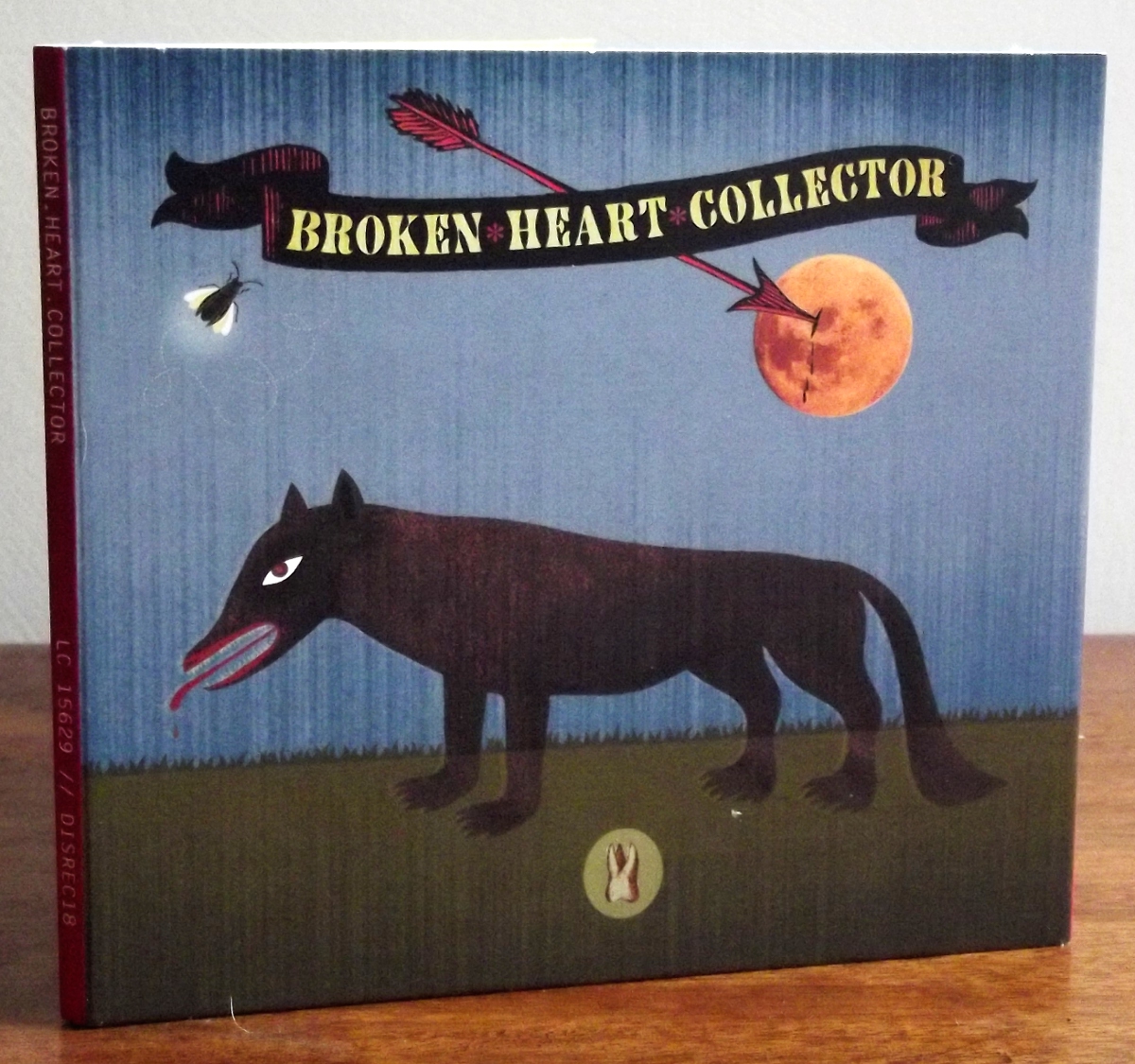 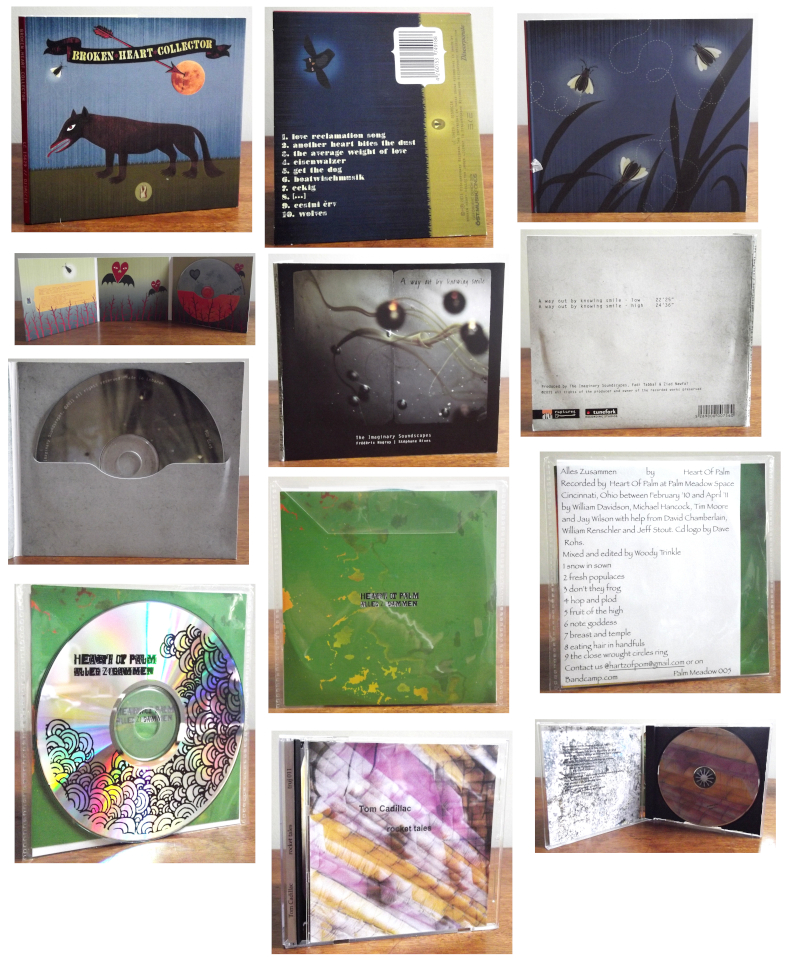 If I was hearing Broken Heart Collector (DISCORPORATE RECORDS DISREC18) in February or March instead of in the bleak midwinter, I’m fairly sure it would instil certain bittersweet emotions of love and longing. As song lyrics, track titles and images make clear, Broken Heart Collector see love as an elusive force of nature, something mysterious and fleeting that you almost have to hunt down like an animal in the wild. Maja Osojnik is the lead singer of this German five-piece, operating with her English lyrics apart from a Slovenian song called ‘Another Heart Bites The Dust’, and she’s accompanied by four very talented players with their woodwinds, guitars, electronics and percussion who create interesting and wayward musical backdrops full of mixed chords, odd shapes, and craggy textures, all given an attractive studio burnishing by Oliver Brunbauer’s mix. If this record were a sculpture it might be a wild and rugged piece of wood rescued from an ancient tree, its scraggly bark polished and lacquered to perfection. Some listeners may prefer the band’s upbeat mode, as on ‘Walk The Dog’ which is as lively as anything Henry Cow ever mustered in the Kurt Weill mode with similar instrumentation, although the listener’s forlorn and heartbroken side is well-catered to by long pieces such as ‘Love Reclamation Song’, a slow dirge wherein Osojnik unburdens her soul. Her voice maintains stern control, but she walks a tightrope across a field of hurt emotions; constrained anger, resignation, self-pity. Mackie Osborne did the excellent cover paintings. Be ye wolf, owl, bat or firefly, this is the next record you should play under a full moon.

The Knowing Smile you Send…

The record by The Imaginary Soundscapes didn’t bode well at first sight, as for me it’s not a great “project” name and A Way Out By Knowing Smile (RUPTURED RPTD 006) feels like a rather ungainly title. Spin the disc though to be greeted with an unusual and studied piece of electro-acoustic feedback minimalism, expertly created by Stéphane Rives and Frédéric Nogray and plainly presented in two very long parts, one of them designated ‘Low’ and the other ‘High’. Gently lulling and mutating waves of droning abstract sound are created by Rives using samples from his own back catalogue of saxophone improvisations, along with field recordings from his own environment which he’s been collecting since 2010. Nogray for his part is simply manipulating feedback tones with his foot pedals. The two of them sound like they’re having a mesmeric ball, albeit one that happens very slowly, as they plaster continuous sound around their bodies like long-distance swimmers covering their bodies with goose fat. The ‘High’ track is slightly more lively and contains more weird effects per square inch, even daring to noise it up a little in certain passages, whereas the ‘Low’ track is better at massaging your listening lobes with the hypnotic effects. The album is clearly intended to have a benign effect, and the creators state they “wish the listener some beautiful journeys”. I’ll bear that in mind when I make my next trip down to the local Morrisons to buy some fresh bread.

The Cincinnati combo Hearts Of Palm have now revised their name to Heart Of Palm. They say they’re doing this “to avoid confusion with the myriad bands who’ve copped our shit”, something which I find hard to believe (who could copy this obscure band?), and I think it’s just a way of throwing everyone off the scent. After all Sun Ra used to invent new names for the Arkestra on a regular basis, and even Loren Mazzacane Connors couldn’t settle on a single name variation for his solo releases for very long. Alles Zusammen (PALM MEADOW 005) is this band’s fifth release, and it’s another gorgeous slice of bizarre and denatured rock music. This time the production is much clearer than some previous (deliberately) murky efforts, and the performing framework continues to allow for much improvisation and inventions from band members that are simply insane in their unexpectedness, plus even a little sprinkling of voice samples and tape loops to add extra sprizzes of confusion and surprise. They have a lightness of touch in their playing (no plodding, thomping rock rhythms in sight) which followers of No-Neck Blues Band could learn from, to their advantage. The core of the work though remains a determination to explore semi-darkened corridors of the mind, marching along interior tunnels by torchlight and greeting the Bosch-like homunculi who dart about our feet or stick their heads out of misshapen windows as we pass. The bleats and whimpers of these sunless inhumans form part of the musical tapestry, further deepening the weirdness factor. Davidson, Hancock, Moore and Wilson continue to function as paragons of dark imagination and warped performing-recording styles which ought to make them a national treasure. Yet this is another limited CDR. An LP release on Ecstatic Peace is long overdue.

Rocket Tales (TARUJA RECORDS TRUJ011) is pretty much a solo set of freaky electro-pop tunes from the fingers of Tom Cadillac, recorded in Auckland NZ with the occasional help of George Andrews (drum programming and production), Vicki Johnson, Phil Morten, and others. His synths groan out with a thick, analogue sound, rich as a bucket of hot tar pouring directly into your stomach. This CDR release has the feel of a 1980s bedroom tape, which isn’t a bad thing at all, and I like the slightly DIY clunkiness of the record – his machines give the impression they’re held together with chewing gum and sellotape and may fall apart the second he hits the envelope generator switch. There’s a vague heat-haze distortion to the finished production which adds considerably to listening fun. Cadillac’s take on the “minimal dub” style as typified by Basic Channel releases of the 1990s is evident in ‘Puppet Fan’, but he has much more fun with the idea than those joyless Germans. Only drawback is that Cadillac can’t seem to invent a truly memorable tune on these instrumentals, nor think about how to develop it successfully; consequently every track starts out good but doesn’t really end properly, and feels about two minutes overlong.