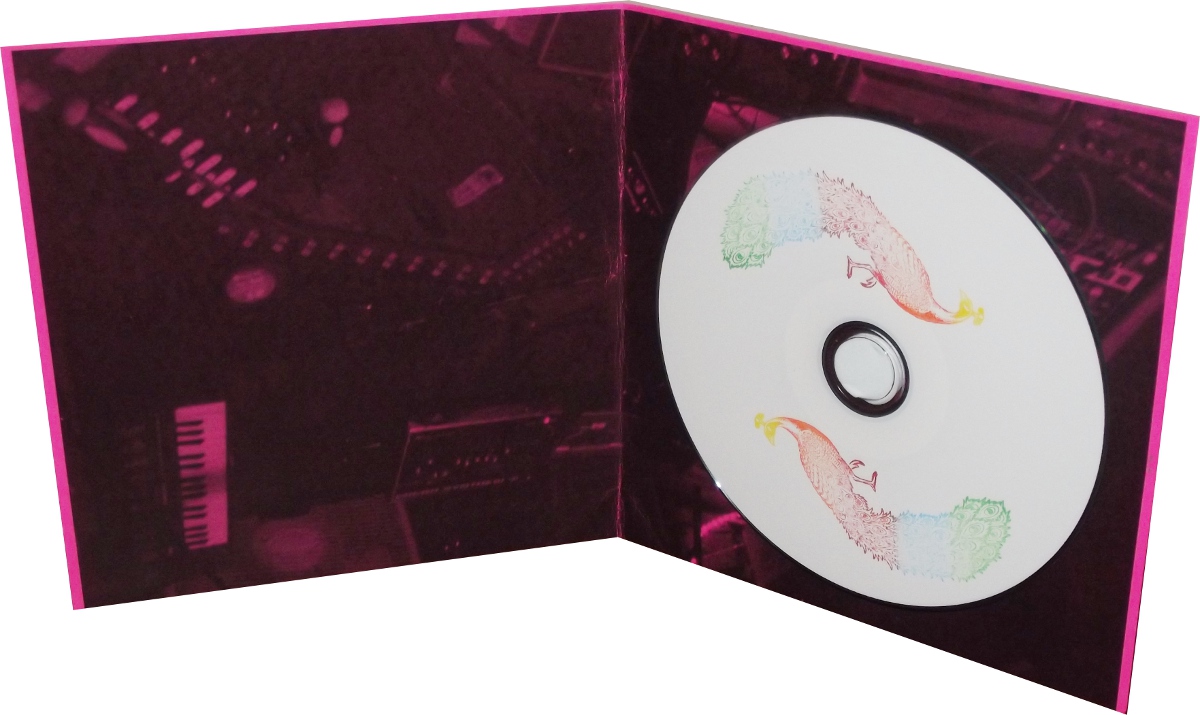 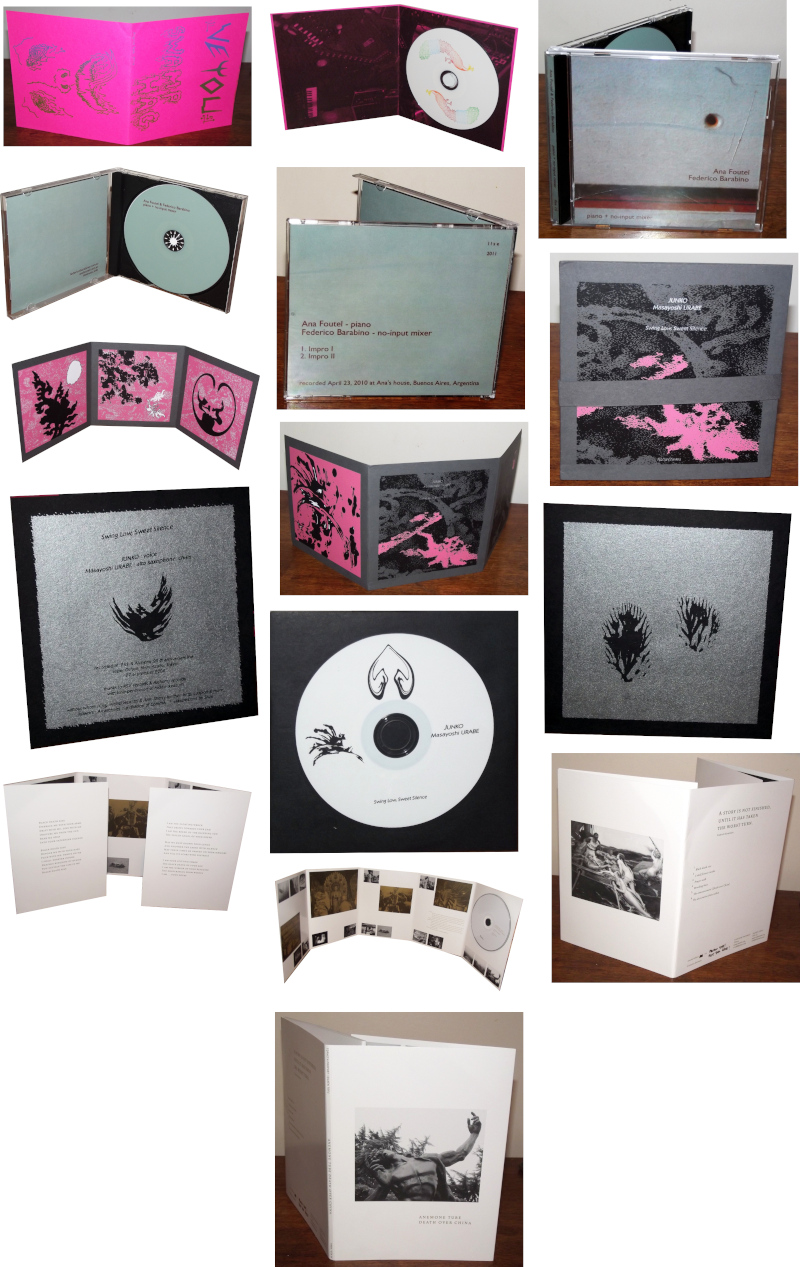 Born on the Veyou

Last heard from the American sound artist Nick Hoffman in September with a couple of very subdued and inexplicable releases, still amazing the crowned heads of Europe to this day. Here he is again as one half of Swamp Hag, teaming up with Stephen Hilliger to create the half-hour CDR Veyou (PILGRIM TALK PT14). The cover drawing is also by Nick. With its EC Comics styled lettering, and its melted distorted face of a forked-tongued and fanged demon with rheumy eyes, this artwork makes me think I’m going to get a blistering noise assault the second I press the play button. Instead, Veyou turns out to be a beguiling session of what the creators call “Basementronics”, which I assume means a form of live electronic music made in a dark and dank cellar, hopefully by candlelight for added atmospherics. This lumpy non-musical sludge seems to ooze out of the pores of gigantic grey ogres rather than resemble anything produced by mankind, and you almost feel you could take a bath in it (although it would be a very slimy and sticky bathing experience, admittedly). Quite some way from the brutal Wolf Eyes school, this brand of low-key noise dispenses with the rock-music elements such as aggression and loud volume, and it just grumbles away very mysteriously, manufacturing its own peculiar brand of uglification. Photograph of set-up on the inside (if indeed that’s what it is) suggests that the process involves sending and repeating signals through mixing desks and pedals, generating mutations as needed.

Ana Foutel and Federico Barabino are two Argentinian musicians, who made Piano + No-Input Mixer (ILSE 15) in Buenos Aires in 2010. Two long improvisations sees the duo experimenting cautiously with long tones of subdued abstract feedback and some tentative piano trills. Foutel the pianist has a background with playing the “difficult” greats such as Cage and Webern, while Barabino is an improviser and adherent to the “deep listening” method, perhaps bringing intuitive aspects to this work. A few too many lulls in the day’s work for my liking, but when they make the right combinations the music does have quite an “enchanted” feeling, like the music you would hear when captured by elves or other supernatural beings.

A superb piece of improvisation from the Japanese underground is Swing Low, Sweet Silence (AN’ARCHIVES AN’03), a 2004 live performance by the shrieking genius vocalist Junko (often heard with Hijokaidan) and the saxophonist Masayoshi Urabe, the intense performer whose work is usually described using words like “physical” and “uncompromising”. This document may start off pretty subdued, but after five minutes the duo are worked up into full operational mode and the pressure never lets up thereafter. You have only to listen to this harrowing sound for a few moments to gain a vivid sense of their writhing bodies, twisting themselves into contortions to produce this intensely difficult and challenging noise. Not that it’s particularly loud – after all, it is acoustic music – it’s just very uncomfortable to listen to. This is not the musical meeting of minds you might get from putting Phil Minton with Peter Brötzmann, it’s more like an exorcism, a painful and cathartic event where both these players seem to be turning themselves inside-out to release and confront many fearsome inner demons. The natural acoustics of the venue add a strident echo to the sound, casting all in a lurid light, and the whole thing is like the aural document of a gruesome autopsy or torture session. The longest 28 minutes of your life! It was recorded at the SuperDeluxe venue as part of a 20th anniversary of PSF and Alchemy, two important Japanese record labels who have become significant repositories of the Japan Underground in music, and whose executives must have wondered if they could possibly manage another 20 years at this level of intensity as they sat there enduring this unpleasant screech, reaching for the chequebook with one hand and the aspirin bottle with the other. Michel Henritzi assisted with the release, and his poetic description can be read on the An’Archives blog, his effusive prose charged with phrases such as “the screamer and the whisperer sail away toward the worst, expelling from their bodies shredded songs whereon our senses shatter.” Beautiful silkscreen presentation in pink, black and silver made by Siwa Records using artwork by the label, 300 copies only.

Death of a thousand edits

Also worthy of the epithet “intense” is Death Over China (TOPHETH PROPHET TP024 / SILKEN TOFU STX.19), an ambitious artistic statement realised in sound and images from Anemone Tube. Anemone Tube is a latterday Industrial noise musician active in Germany since 1996, and he has collaborated or performed with Shift, Sudden Infant, Christian Renou, and William Bennett of Whitehouse, among others. This release is packaged in a luxurious fold-out card device decorated with a gallery of the creator’s photographs from his trip to China, along with some archival photo material including the notorious Leng Tch’e photographs from 1905, and verses of grim poetry about “Black Death” also penned by Anemone Tube. I’d be tempted to align this with many other noise records that push the “apocalypse culture” buttons, but Anemone Tube’s distinctive sound-art here is dramatic and powerful and very creative too. Apparently it’s all made up of field recordings from his trips to Nanjing and Shanghai, and synths are only used on a couple of tracks; he builds up suffocating walls by making numerous loops and layers from his materials, piling it on relentlessly until the effect is overwhelming. Yes, the atmospheres he builds can be as menacing as that of any given “transgressive” music made after 1979, but I sense there is also something quite complex and unknowable taking place here, as though he had managed to capture the darker spirit of contemporary China in his tapes like spirit photographs, and is bringing that darkness to the surface through his layering, looping and editing. I’m not advocating that all field recording work ought to emulate this approach, but it is a very unusual and effective method. It works particularly well on tracks 2 and 3 which are spectacularly chaotic, reflecting urban sprawl as a hideous nightmare and depicting a modern Hell worthy of Bosch. But ‘Brooding Haze’ has a terrifying air of menace constructed mainly from sounds of the wind, and ‘The Announcement’ allows some audible English phrases to bubble to the top of its seething cauldron of churning loops; we hear a voice repeating “there is life, there is hope”, a sentiment which is completely at odds with the overall pessimism and uncertainty of this track (and indeed the entire release). An exceptionally strong and unsettling work.