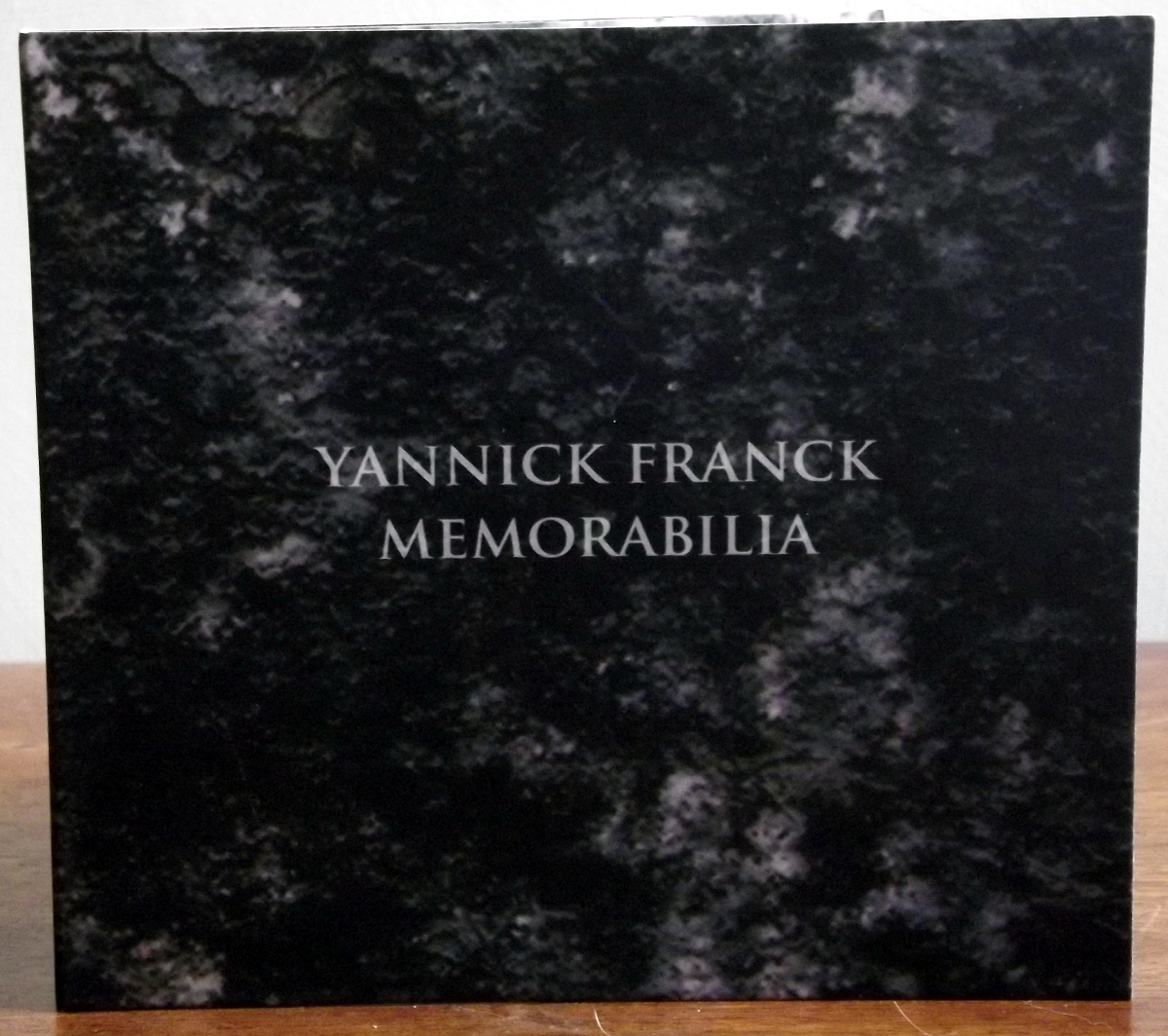 On this day to agitate your molecules in time with the slow crawl of the universe, tune in to Yannick Franck‘s Memorabilia (SILKEN TOFU STX.15). Fine construction of ambient music in the noire-mode from this Belgian sound artist who wallows freely in the inexplicable ambiguities of life. For him, all mysteries lie beneath a solid crust like that surrounding the globe, and his layered and burnished grumbly rumblesome textures have been fashioned from something fairly earthy and elemental, like deep silty mud from the heart of a peat bog. I particularly like the pessimistic tenor of ‘Urban Disease’ which, with a few clipped guitar notes plangently ringing inside a bowl of droney murk, effectively sets the seal of doom on every modern conurbation from Croydon to Djakarta. I also like Track 5, which may be called ‘The Answer’ (the tracklisting as printed is confusing); you just can’t beat the effect of muffled and mumbling voices piled up in absurd disorder and whispering dark secrets that invite the prying ear to make sense of the jumble of phonemes, at the same time disentangling the dream-state from reality. And ‘Self Loading Defeat’ wins the prize for one of the most acutely depressing titles of 2011, a perfect encapsulation of the futility of the endeavours of a man trapped into inertia by his own self-hate; I like the idea that this modern affliction is now so efficient, it loads itself into your system like a computer virus. Regarded as a sleep-inducer in some quarters, this record is one of those that can’t fail to induce rich and menacing nightmares during the fitful half-sleep of which it is the grim harbinger. Triple gatefold digipak, decorated by Franck with suitably vague texture images.

Philosophy of the World

Got a double CD set by Francisco López, the Spanish composer who used to be notorious for his near-silent works and his long duration – time was when a single composition by th’ Lopester might occupy an entire CD, and half of it you couldn’t hear anyway. Untitled [2009] (BASKARU KARU:20) shows he has progressed well beyond that point, and it’s a generous helping of sonic incident packed into a series of relatively short executions, some of them 3-5 minutes long. While some are probably composed out of single or multiple field recordings from very specific locations, others make use of electro-acoustic transformations to enhance the listening experience. Others, like the 20-minute piece on CD1, even emerge as something like music with actual tones, notes, and chords hidden within these strange ostinatos, which may turn out to be derivations from a sheet-metal factory in Omsk or the result of concealing a small microphone near the Ohlanga lagoon in Africa. As ever, López carefully snips off all the conceptual labels and insists that, as listeners, we surrender our preconceived baggage at the check-in desk before we can get on board an EasyLópe flight to FranciscoVille. He enacts this strategy through his continued use of ‘Untitled’ (with a number) to identify each of his works, making titles that aren’t really titles at all. It works to the extent that our puzzled brains are constantly asking questions about the wonderful source material that greets our delighted lugs. But it’s not just a case of allowing free-association; the release is intended as an expression of López’s highly developed ideas about ecology and philosophy, a world view built from his aural observations and recorded documents brought back from his extensive international travels. It’s certainly a different and more imaginative picture of the contemporary world that what you get from opening a daily newspaper or clicking on any given news website, with its dreary facts about political infighting and financial disasters.

Bassman to the Max

The English label Bo’Weavil Recordings sent us a generous batch of items in October 2011. Here is one of them, a welcome return to the public arena by Simon H. Fell, the gifted English composer, improviser, musician and all-round good guy who we interviewed in an early issue of TSP magazine. Frank & Max (WEAVIL43CD) is subtitled Bass solos 2001-2011, and it showcases Fell rattling out some impressive improvisations on his chosen instrument, the upright double bass. One of them is a five-string bass made for him by his wife. I don’t have a clear picture of this unique instrument, but I hope this customised device allows him to extend his grasp of sub-bass frequencies and enter the lower registers in ways that conventional instruments do not (I seem to remember at sixth form hearing about a customised grand piano that added an extra octave of keys at the lower end, with a hinged lid that could be shut to accommodate the conventional pianist). Each piece is dedicated to people who have been important to Fell (such as his first music teacher) but also to notable bass players from the history of jazz and improv, such as Barry Guy (who made some exceptional records with Evan Parker), Barre Phillips, Harry Miller (the hard-working man from Ogun), and my personal favourite Charles Mingus, the great enigma of American jazz who I’ve been listening to and collecting since 1978 and yet continue to find surprises in his catalogue. Indeed if you ever care to make the effort to delve into Fell’s back catalogue and hear some of his large-scale and complex big band compositions, you’d see why in my mind I liken Fell to Mingus. The recordings for this release were made by Fell and his long-time friend collaborator, the English improviser Graham Halliwell, and they certainly knew where to stick their microphones: the album has a room-vibrating presence that’ll shake off your lethargic outer layer as a snake sloughs its skin. Once denuded, you’ll be back in touch with your true inner core and can accomplish great things. Only the naff cover art disappoints me; front cover looks like a big orange crossbow, and doesn’t really communicate much.

Fell’s album might be called “skeletal” in more ways than one, and one might be tempted to read its complex lines as blueprints for compositions yet to be built. For more superb improvisation of quite a different sort, you must hear Erb / Baker / Zerang (VETO-RECORDS EXCHANGE 001), an album which documents the studio meeting in June 2011 of Swiss saxophonist Christoph Erb with two Chicago players, the drummer Michael Zerang, and Jim Baker, who contributes piano and analogue synth. For starters, the combination of woodwinds with live electronics has always been a personal preference with this listener, and I find Baker’s elegant and refined synth utterances compliment Erb’s blowful bell-ringing blasts quite superbly, while Zerang rings in with sharp punctuation and paragraph breaks which also add to the thoughtful prose of the Swiss tenorman. It’s a warm and unhurried session, not a cold or inhuman tone uttered across 46 minutes, nor do the players scuttle around the room as though their knee-length socks were filled with termites. Erb has a sumptuous tone on his sax, and possesses many useful techniques for production of abstract music, such as sucking and gulping effects and a way of “bending” his notes so they seem to actively curve around the room like Puck putting a girdle around the earth. John Abbey did the recording and the mixing, and to his credit he keeps each instrument crisply separated on the tape, allowing us to savour the lovely acoustic blends executed by the musicians; all the performances really shine forth. Issued in a nice shaped card package with a silkscreen design on the cover, and the fish-themed imagery will allow me to file it next to the Incus LP Hook Drift and Shuffle, the concept improv LP about deep sea fishing whose cover art featured many fish hooks.