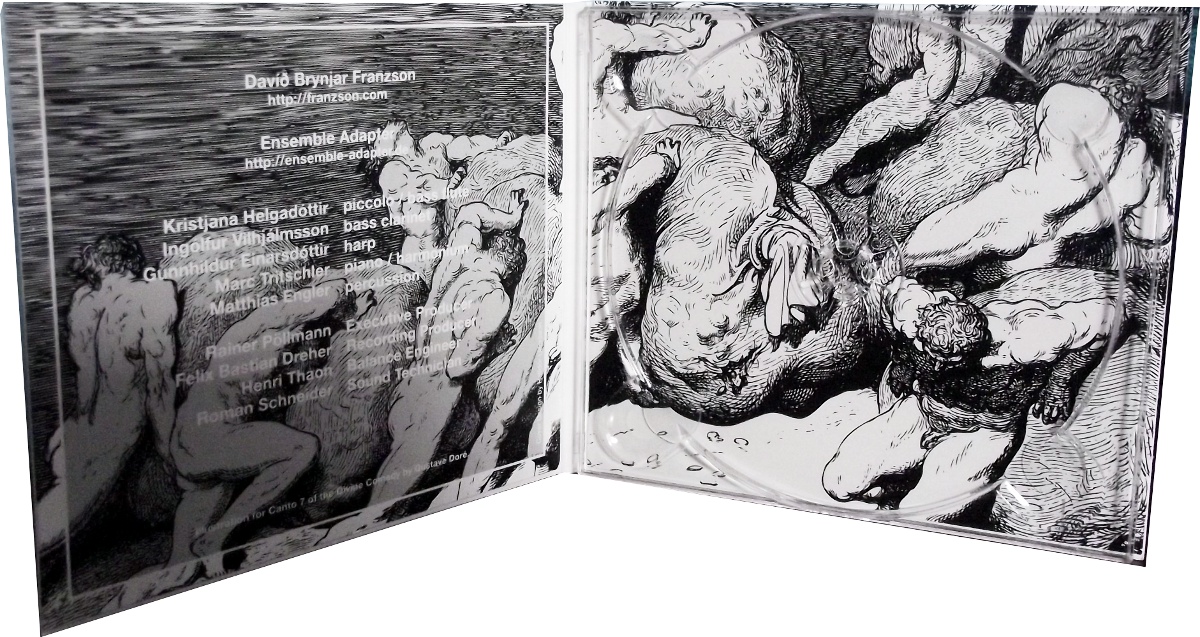 A Guide for the Dead through the Underworld (CARRIER RECORDS 012) would be a useful manual for any human being, in particular Orpheus when he made his fated voyage through the dead zone, and of course Dante in his classical take on the numerous tortured souls he expected to find writhing in Sinnersville, even though he had Virgil as his personal tour guide. I also remember a small press comic by Johnny Rush in the 1980s, Angels and Devils, in which the protagonist in one chapter was given an A-Z street map of Hell, prompting me to quip “Hell is a city much like London”. The composer Davíð Brynjar Franzson has his own specific musical take on this theme, and it’s largely expressed in the production of quiet but very spiky and discordant avant-garde music played by Ensemble Adapter, a small ensemble using woodwinds, harp, piano, harmonium and percussion. Sounds quietly leak out into the charged atmosphere like silver drops of moisture, or they rudely parp their way into earshot like the bad-tempered bass clarinet of Ingólfur Vilhjlámsson on ‘The Principals of Order’. Sounds also tinkle, rumble, clank and scatter about like multi-legged rats and rodents scuttling every which way. They stop and start like a wheezing old man on the stairs. I’m trying to convey something of the uneven and unpredictable surface of Franzson’s underworld, which is not a dark or malevolent zone such as might be painted by a Black Metal guitarist, but an odd, unsettling, and decidedly non-human space that behaves contrary to most of our known rules. The composer arrives at this point by, apparently, drawing inspiration from everyday sounds observed and catalogued from his own personal environment as the inspiration for his score; such that the boiler in the basement of his apartment (for example) might end up notated as an acoustic bubbling drone for the bass flute. He’s also attempting to generate musical “monsters” through a process that is not quite clear to me, but it has something to do with this artificial re-imagined environment that mixes the familiar with the unfamiliar and allows strange entities to hover on the edge of our peripheral vision. With titles such as ‘The Failure of Surface’, ‘The Rules of Irrelevance’ and ‘The Elimination of Metaphysics’, you can be sure we’re in for a bracing conceptual ride with this piece of high modernism. The sleeve is plain white, highly suggestive of the “non-zone” that I assume characterises the entrance to the nether regions, while inside there are details from the famous Gustave Doré engravings for Dante’s Divine Comedy. From November 2011, a truly chilling triumph of strangeness from this Icelandic composer who lives in New York.

Very coincidentally the trumpeter Nate Wooley made a record for Carrier which we noted in September 2011, a set of duets with Peter Evans which was quite a wild and woolly one – semi-structured improv and process work bordering on free noise. His November 2011 release The Almond (POGUS PRODUCTIONS POGUS 21061-2) is quite different to that, and it’s a beautiful piece of solid minimalist droning. He put it together using multiple recordings of his trumpet playing, using different microphones and placed in different recording locations; and the instrument itself was varied through tunings, or use of the mute. It’s all about the generation of timbres, pitches and overtones, allowing for the creation of spectral harmonies and unexpected voicings in the finished playback. In pursuit of this purity, Wooley refuses “extended technique”, by which I assume he means adding any form of embellishment to his tones and demanding of himself the utmost discipline when it comes to fingering methods and breath control. He likewise eschews processing, which presumably means there are no post-production studio treatments applied to the tapes, and the only studio technique has been the editing together of long sections of recordings. No wonder Al Margolis, who once overdubbed and multitracked his clarinets to tremendous effect on Clara Nostra, is getting excited about this release. As he points out, “the materials…seem to grow out of each other, spatialized in such a way that suggests a more organic movement than the tedious tape preparation…would suggest”. How true; Wooley’s art transcends technique here and The Almond successfully sublimates all the hard toil of its creation into a highly compelling, rich and varied listen that borders on the monumental. The 72-minute work had its origins in a [2010] submission to Compost and Height, a 20-minute piece where Wooley’s express aim was to move beyond the signature sound he had evolved in his jazz and improvisation work, and produce “true solo trumpet” music. Arriving with a Louis Althusser quote printed on the back cover and a suggestion that playback at loud volume / through headphones is indicated, this fine creation rests squarely in American Minimalism traditions, strongly reminiscent of Phill Niblock or La Monte Young.