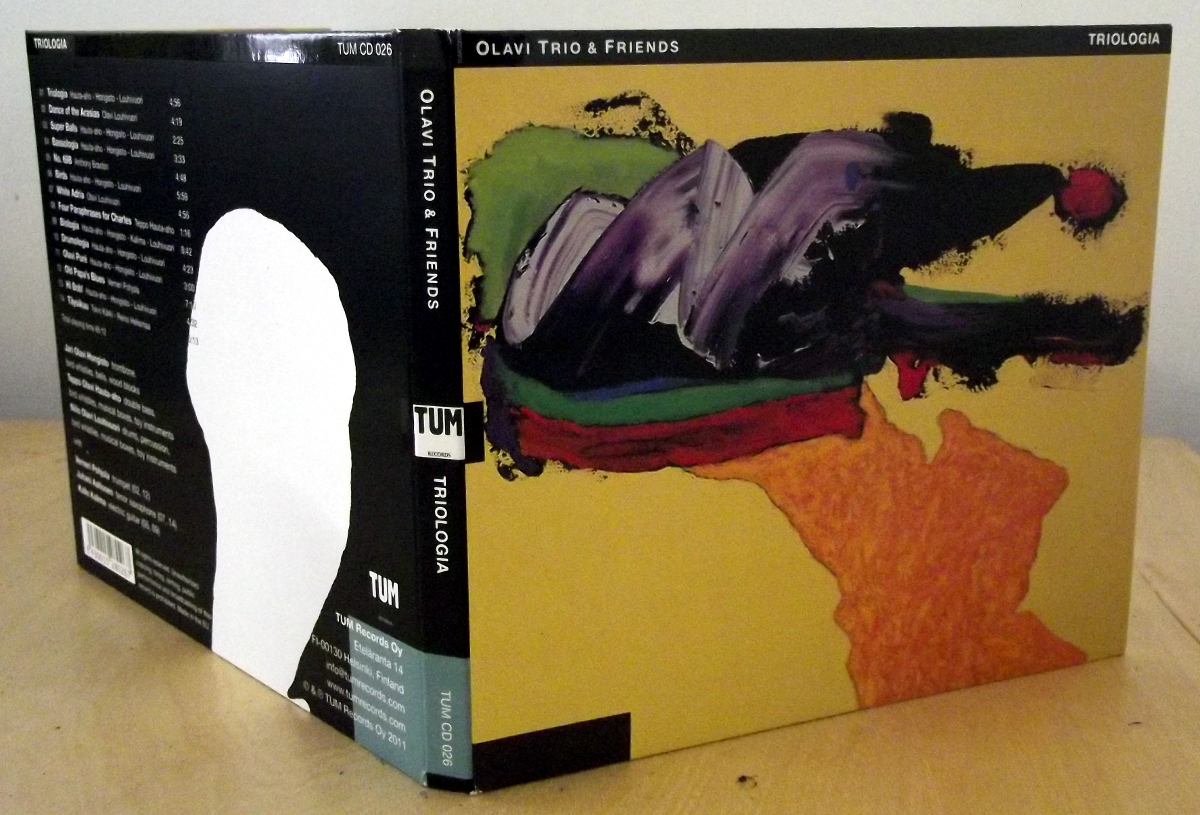 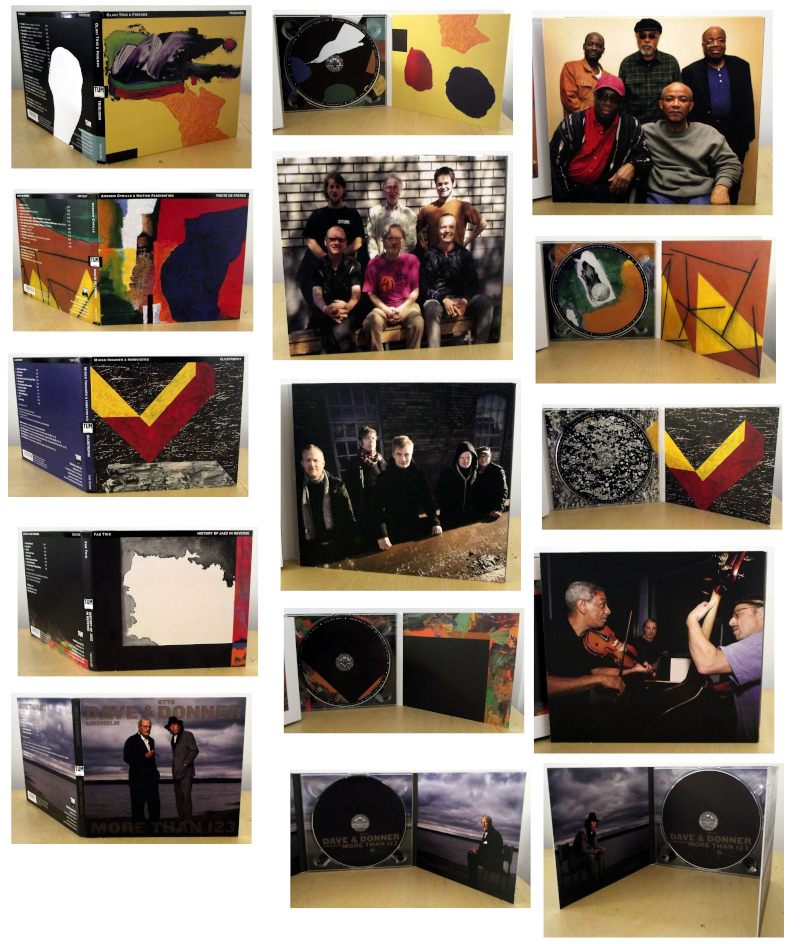 Big bundle of experimental jazz and improv albums arrived from the Finnish label TUM Records on 13 October 2011. All these releases are very well produced records and are smartly attired in colourful triple-gatefold digipaks with generous booklets of notes and photos and abstract painting cover artworks.

Olavi Trio & Friends features the trombone playing of Jari Hongisto supported with Teppo Hauta-aho’s bass and Niilo Louhivuori’s drums, but guest players join in with trumpet, tenor sax or electric guitar on some tracks of Triologia (TUM CD 026), and in many places the group dynamic is a very successful negotiation of mixed voices. I like it best when they manage to disguise their instruments’ natural tones and arrive at a low, growling rumble effect which grinds away like the teeth of an old man eating cake. But the pace of this album is a bit too subdued for me, and I wish it had a little more menace or tension. Kalle Kalima’s electric guitar seems to liven up the players somewhat and I like some of his atonal meanderings on the long track ‘Biologia’, but in the final analysis this record murmurs and mutters a little too vaguely; I just wish they’d get to the point and say something definite, instead of all these constant allusions and obscure remarks.

Route De Frères (TUM CD 027) is a much warmer and even a very entertaining jazz album. The great free jazz drummer Andrew Cyrille, famed for his work on ESP-Disk and with Cecil Taylor, goes back to his Haitian forebears as he joins forces with the combo Haitian Fascination, a foursome which is half American and half Haitian. Not really a free jazz album; these are 12 jolly tunes and toe-tapping melodies which are showcases for the players taking solo turns one after the other, in the good old-fashioned small combo jazz style. The uptempo numbers like ‘Marinèt’, ‘Deblozay’ and ‘Isaura’ can’t help but make a hit in the stoniest of hearts, and you’ll be pulling on your dancing shoes in five seconds flat. What a terrific rhythmical swing it all has. No doubt the Haitian master percussionist Frisner Augustin (also artistic director of a dance company in NYC) has a lot to contribute, but all the players provide an irresistible and unusual lilting rhythm which you won’t hear on many contemporary jazz albums, and Cyrille’s restrained drumming is a joy throughout, his bass toms giving a solid foundation to the gently skipping melodic lines on top. What strikes me is the very open and refreshing sound of the album; the acoustic guitar of Alix Pascal is as light and delicate as autumn sunlight on the falling leaves, sometimes reminding me of Dorothy Ashby’s harp albums. Hamiet Bluiett’s baritone sax also adds an unusual flavour to the combo, and it’s a splendid combination of voices. While some of the tunes may stray a little close to easy-listening, it’s still a winning and heart-warming set.

Now we come to Clustrophy (TUM CD 025), an intriguing album by Mikko Innanen & Innkvisitio. This group is led by the “free-minded” saxophonist Mikko Innanen who is a graduate of music academies in Helsinki and Copenhagen, and leads what is essentially a sax-trio album with Fredrik Ljungkvist and Daniel Erdmann, supported by drummer Joonas Riipa, with no bass player in sight. So, a very full sound on the record and one which has been immaculately scored and arranged to make much of the cross-rhythms and three-way interplay of the saxophones, and the full range of woodwinds is on offer – alto, baritone, tenor, soprano and sopranino. Like a well-oiled acoustic machine they function beautifully. The band’s secret weapon is the synthesizer player Seppo Kantonen, who adds fabulous touches of fruity electronic wildness to the sound. While the title track isn’t much more than a sophisticated take on Duke Ellington, I very much enjoy the awkward and craggy compositional style of ‘Earth’s Second Moon’, which also showcases the band’s distinctive voices very well. It ain’t quite the Sun Ra Arkestra, but it’s got a strong Nordic flavour of reinterpreted and repurposed American jazz motifs. We’ve also got the subdued mystery drone of ‘A Panoramic View from the Top Floor’, where the massed breathy saxes are again augmented and coloured by Kantonen’s lovely filtered keyboard settings. And there’s the ultra-complex Zappa-esque circus jazz music of ‘The Grey Adler Returns Again’, which really puts the drummer through his paces as he attempts to render the jumpy, herky-jerky rhythms, never missing a trick; and the hauntingly melancholic clarinet tones on ‘Ardennes at Dawn’. Perhaps Innanen never quite overcomes his conservatoire training, and there is an overhanging sense of “seriousness” to the album, but this isn’t to say the music is stilted or pretentious. Clustrophy is a varied set of good experimental jazz-rock, free jazz and electronic music moves, with a perfect production sheen and not a misplaced note anywhere. I also bet if you saw this band live you would not be disappointed.

Another American free jazz hero is Billy Bang, who passed away in April 2011 just as History Of Jazz in Reverse (TUM CD 028) by Fab Trio was entering its final production stages. Simply great violin playing from Bang, with bassist Joe Fonda and drummer Barry Altschul, and this excellent album is truly the goods. Seeing as how Bang has played with personal favourites Don Cherry, Sun Ra and James Blood Ulmer, I can’t figure out why I don’t own any of his solo records. As I listen to the variety of styles in his playing, how he performs impossible feats with evident ease, I can only sit back and enjoy in admiration. Of the records in this list so far, this is the one that hasn’t forgotten how to swing. Dynamic motion that’s like a cross-country car ride into other dimensions, sometimes as on ‘From Here To There’ speeding along at a demonic rate of knots with Bang recalling Leroy Jenkins at his most possessed and frantic, although you may prefer the brilliantly syncopated rhythms of ‘Implications’ or the smoky serenity of ‘Chan Chan’. And if it is indeed an album that contains a statement on the history of jazz in its grooves, then it’s a personal odyssey that ends with a nod to New Orleans (the cradle of jazz, natch), along the way pays a tribute to 1960s free jazz in the form of Don Cherry, and begins with a wistful tune called ‘Homeward Bound’, to the accompaniment of which I would like to think Bang is ascending to his rightful place in Jazz Paradise where he may play his golden violin for eternity. Recorded and flawlessly improvised in the studio in New York in 2005. May I recommend this great album wholeheartedly.

Can’t say the same for More Than 123 (TUM-A CD 001) which is a little out of my line; it’s a showcase for the singing and guitar playing of Dave Lindholm, with a jazz band combo under the baton of conductor Otto Donner. Lindholm, a long-serving singer since the early 1970s, may well be respected in the Finnish scene, but his croaky blues-influenced crooning is too corny for me, seriously lacking in conviction and pressing too many flattened fifths on autopilot, to say nothing of the cliché-ridden lyrics. We are invited to find resonances with Tom Waits, but it feels more like a Finnish version of the hateful Jools Holland Big Band. The supporting musicians play competently enough however. Lindholm is attempting the Zoot Suit look on the front cover, but with that cut and the sort of ordinary grey material you’d associate with a businessman or a conservative politician, a shape in a drape he ain’t!