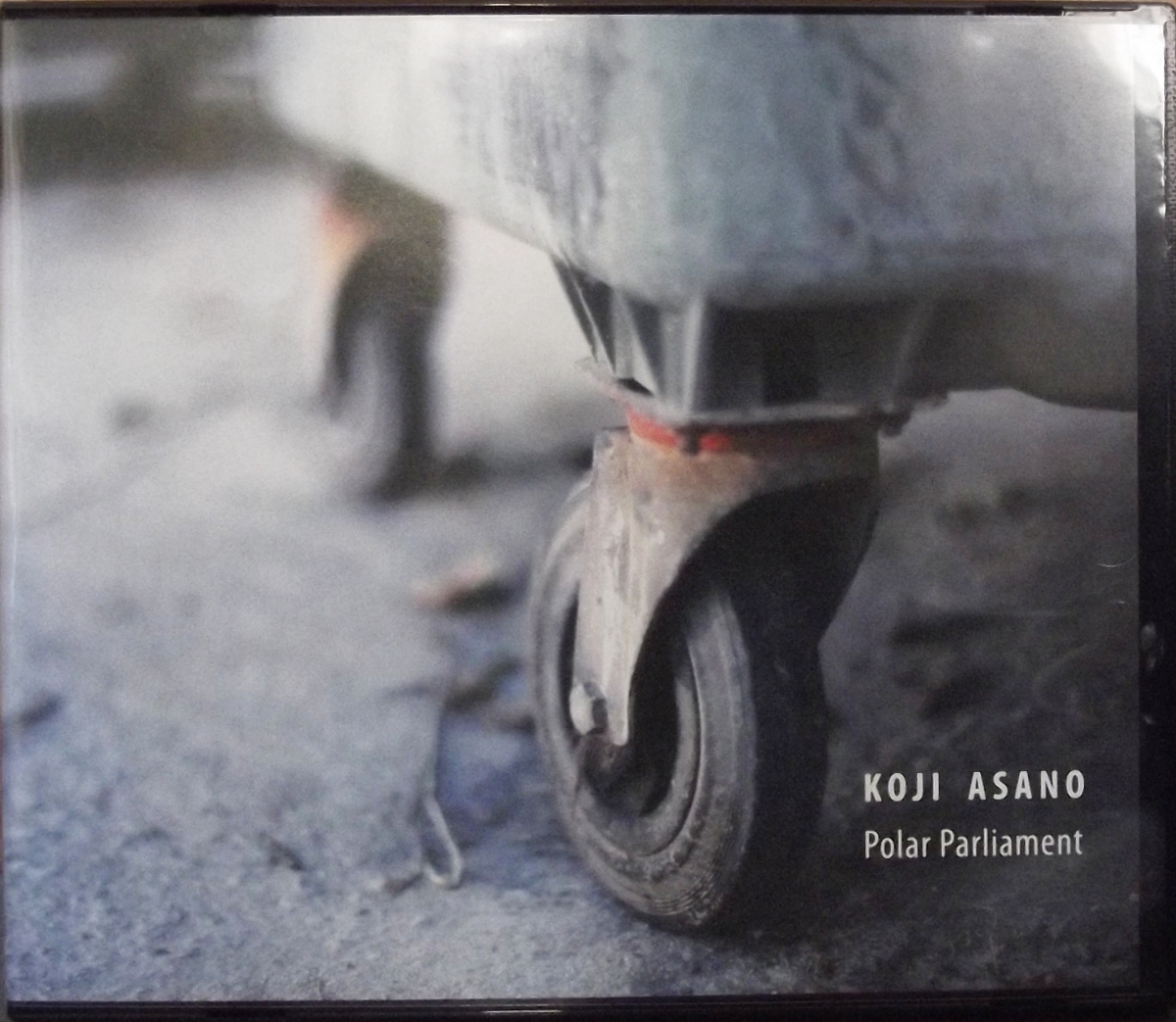 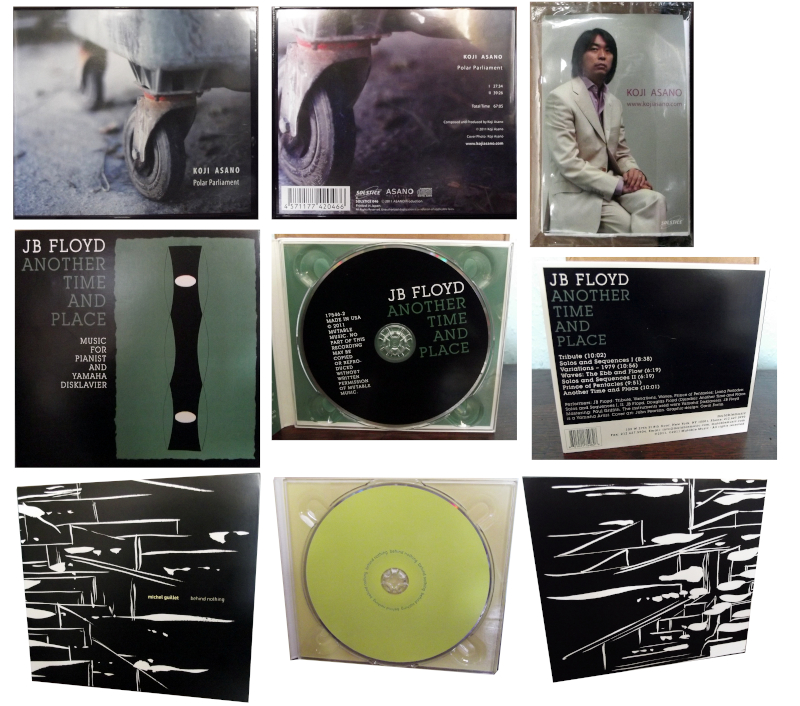 From November 2011 we have what might be Koji Asano‘s last release for that year, Polar Parliament (SOLSTICE 046). This latest piece of strange and unidentifiable electro-acoustic music flows past us in two long parts, of which the first movement resembles a recording of a hummingbird slowed down to such an impossible degree that we can not only hear each individual flap of the wing, but also the blood cells coursing around its tiny bird veins. Only a technological superman like Asano would have access to a microphone powerful enough to capture nature in such fine detail. Actually it’s more likely to be computer-generated abstract noises set in a loop and fed through various humanising filter effects, but with its irregular pattern-generation method it’s still a compelling and hypnotic continuo-head-massager, which varies ever so slightly over the duration of its 27 minutes. Part two seems to pursue the vague “nature” theme, as it instantly resembles a vast cloud of hornets, gnats or bees, but they’re creating a steady and menacing hum that is completely impossible in real life, and we’re clearly quite some way from the manner in which Chris Watson or Francisco López would document such winged beasticles of the air. Again, it’s more plausible to suppose that Asano generated this thick buzzment and growlitude through use of good analogue synths, or layers of digital sound files burnished to perfection inside his super-expensive Mac. The low growl intermittently cuts out and fades in again, as though it were a TV signal transmitted imperfectly from another universe. This is the sort of thing I expect to hear in April this year when the whole digital TV switchover plan goes disastrously wrong. Continuing his recent fad for including free gifts with his releases (the last one was a biro with his name on it), Asano throws in a small packet of tissues wrapped in a self-mocking “corporate” package, where the man himself appears in a photo dressed in a fine white suit looking more like the head of a financial services company than a musician. Meanwhile the cover artwork gives us details of wheelie bins which we might otherwise overlook.

At some stage in the 1990s I think the Synclavier technology developed in even more powerful ways, integrating a hard disk system with a piano keyboard to create a smaller and more portable instrument that could also enable a larger range of sounds and samples to be performed, simply by inserting diskettes into a slot. I also imagine this probably caused heart failure among certain sectors of the Musicians Union at the same time. This is what I assume we are hearing on JB Floyd‘s Another Time and Place (MUTABLE MUSIC MUTABLE 17546-2), which is subtitled “Music for Pianist and Yamaha Disklavier”. The album showcases a number of Floyd’s compositions, some dating back to 1979. In fact it’s the 1979 piece ‘Variations’ which might be a good place to start for the uninitiated, as it’s suitably approachable with some sweet chords, rhythmic flow, and a jazzy feel to the melodic top line, all of which sweetens the listener in preparation for the more “difficult” pieces of the 1990s. ‘Solos and Sequences I’ for example abandons a steady rhythm in favour of a choppy and unpredictable metre, the chord structures are taken apart and reassembled like schematic diagrams, and any melodic content is much harder to pick out from the complex array of notes. Even so, here we can still discern what Floyd counts as his earliest musical influence – the boogie woogie piano music of Albert Ammons and Pete Johnson, two examples of titanic Afro-American players whose complex music outgrew both the blues and jazz idioms, in my view. Floyd’s trills, decorations and arpeggios may not have the same directness as Ammons, and his music may be more atonal in places, but he emulates those players almost exactly in his understanding of how to use the full range of the keyboard’s scale to great advantage. Dramatic and bold use of low and high notes, in other words. There’s also ‘Waves: The Ebb and Flow’ which is an explicit attempt to imitate the motion of the Atlantic ocean with note-clusters and chordal shapes that Debussy woulda loved; and the intriguing ‘Prince of Pentacles’ where he transforms the piano using the Buchla synth system, achieving some very subtle and mysterious tones without really calling attention to the electronic component deployed. This restrained, Tarot-card inspired composition is a real grower, and really brings home how much this album is a very American manifestation of modern classical chamber music, open to the possibilities of prepared piano and synthesis.

Beyond the Wall of Sleep

Parisian electro-acoustic composer Michel Guillet kindly sent us a copy of Behind Nothing (ING-ON 03) in November 2011. It’s a terrific set of fascinating and dark abstract noise realised with great attention to detail and multiple variations, with several mysterious events unfolding cinema-like on his jet-black projection screen. Every sound has been subjected to intense manipulations and refashioning, but there’s never the sense that Guillet has overcooked his music in the digital workstation, and every crunchy nugget pops out of the pan as fresh as a crispy fried vegetable. He also makes powerful and dramatic use of the stereo spectrum, allowing his vague malformed ogres and monstrous beasts to lumber freely around in a virtual three-dimensional space as they enact their dark and horrifying narratives. It is so refreshing to hear modern music that has been truly composed and arranged in a contemporary fashion using computer tools, rather than someone settling for pre-sets and aimless droning. Guillet is an imaginative creator and an exemplary student of his craft, and while working clearly in the INA-GRM and IRCAM traditions, he has established his own personal voice. Recommended! I think this will make great “snowbound” music too, so in anticipation of the severe weather in the UK this weekend, I’m shortly going to strap on my snowshoes and head to the supermarket to pick up a week’s supply of pemmican, than seal myself in my cabin so I can listen to this Guillet album.