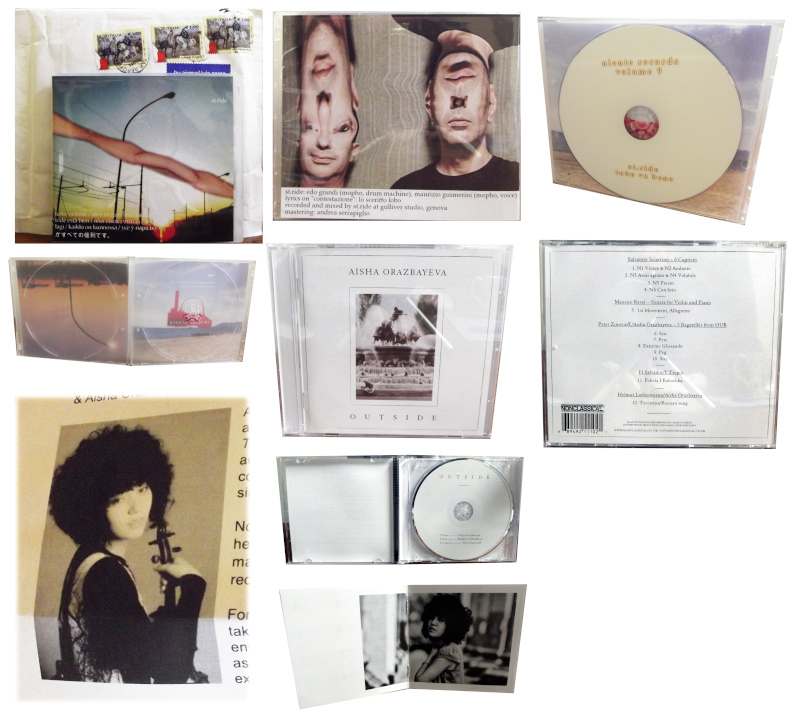 Tutto Va Bene (NIENTE RECORDS VOLUME 9) is the third item we’ve received from the Italian avant-electronic duo st.ride, and it’s another strong set of tunes constructed using drum machine, voice, and the “mopho” which is probably their personal shorthand for the synths and other electronic devices which inhabit their homes in the same way that an unwanted debt-collector hovers around the doorstep of his defaulting creditor. I’m not here to make direct comparisons with previous releases, but this new one feels more stripped-down and uncluttered, probably due to the decision to leave the guitars at home on this particular trip to the Genova studio; without that amplified burr, and thanks to sequencers, monophonic keyboards and primitive settings, the music hits home like a surgical-precision bash in the nose-bone. Maurizio Gusmerini spits, barks and snarls his simplistic lyrics like slogans and chants, a nifty update on the way most UK punk rockers used to sing in 1977; along with Edo Grandi’s drum machine, it’s these rhythmic vocal eructations that are providing most of the structure for each song. This approach creates a bare-bones framework, leaving the synth elements free to squelch out their unnatural fizzes and burbles in extremely simple ways, filling in the spaces and gaps with one-note one-sound monotonal gulps. On occasion, the synths are allowed to go completely crazy, as on ‘Turbamento’ where they unleash eleven types of merry free noise heck from their split-circuit-tongues, making this particular ditty a perfect expression of pent-up anger and frustration in 4 and a half minutes, where the vocalist is simmering with rage and words are inadequate to capture the extent of his emotion. You can hear the stern frown of disapproval written on his face. On ‘Mi Piaci’ he may sound a bit more resigned to the cruel fates of the world, but it’s because he’s been turned into a robot, acquiescing to the incessant demands of the consumer-driven society with a helpless vocodered sigh. In fine, this album is a winning combination of semi-musical contrived chaos, direct and elemental electronic sounds, enervating coffee-fuelled beats, a seriously disaffected singer handing you unpalatable facts (in Italian), and no bullshit anywhere in sight. You may come for the Kraftwerk / Depeche Mode comparisons, but you’ll stay for the distinctive st.ride modernistic take on alienated urban electropop. From the overall pessimistic tone, we have to assume that the title which translates as ‘All’s Well’, is deeply ironic; and the fact it’s restated on the cover in multiple languages only emphasises how bad the situation is world-wide. Embrace this pessimism freely, that’s my advice; in a world full of corrupt media and slimy politicians, at this crucial time we need to get our information from clear-thinking truthsayers, as found on this record.

Profoundly radical and inventive approach to playing contemporary classical violin music from Aisha Orazbayeva on her superb Outside (NONCLASSICAL RECORDINGS NONCLSS013) CD. Technically proficient to a near superhuman degree, she can clearly play complex and challenging modern music with a breathtaking ease, but that’s just for starters – it’s a given. It’s the intense attack of her sound that will demand your attention – she plays like a freakin’ demon on the six Caprices of Salvatore Sciarrino, the startling “calling card” that opens this record and occupies you for seventeen minutes (I personally was riveted to the spot with my jaw hanging open). Her whole body is alive, contorted and possessed as she unleashes these uncanny sounds from her instrument’s guts, not skimping on the astringent scrapey effects and high-register complexities that create shrieking harmonics enough to scrape the fillings from out of your back molars. So far, so electrifying. But all that isn’t enough for her, since she adds a further sonic element by recording these pieces in numerous external locations 1 – bus stop, car park, railway arch, warehouse – eschewing the comfort and predictability of the recording studio acoustics in favour of “wild” echoes and timbral shadings, with results that are later sewn together at the editing suite for maximal ear-slam. You can imagine the devastating effects of these combined strategies, but you don’t have to imagine anything, since Orazbayeva has made this all happen herself. I personally have often grumbled to myself about the generally rather conservative approach to the recording of mainstream classical music; I won’t say that Orazbayeva agrees with me 100%, but she has certainly forged her own personal solution to the situation. Sciarrino, himself something of a musical outsider who considers that he owes no allegiance to any particular school of modernism, seems a most apt composer for her to interpret. The remainder of the CD is also full of interest and surprise; there’s the Ravel Sonata recorded at the Royal Academy recital hall with a piano accompaniment, putting us on slightly more familiar sonic turf (and it’s a beautiful rendering). At the end of the disc are two very odd items – a two-minute Russian lullaby ‘Pchela I Babchka’ by Salvador / Tsepin, and a piece she composed with Helmut Lachenmann called ‘Toccatina / Russian song’, which ought to satisfy your cravings for hearing a truly “deconstructed” approach to plucking muted violin strings in the production of quiet and mysterious music. Before that, we have fourteen gorgeous minutes of ‘5 Bagatelles from OUR violin and computer concerto’, which she wrote in 2010 with Peter Zinovieff. Astonishing far-out musical tones are created and generated with great assurance in a seamless mixture of acoustic playing and cyber-music. Quite different in tone to the “demonic possession” style of the Caprices, here Orazbayeva displays her skill for steady, continuous sound and glorious atonalities, combining it with Zinovieff’s dark cybernetic utterances and producing a music so strange that you can taste it like slowly-unfurling fungi in your brain. This suite has both intense intimate beauty but also unfamiliar and alarming darknesses, as on the closing segments ‘Peg’ and ‘Stre’, whose inventive noisy textures you could use to resurface half of the UK’s motorways. The package may look restrained and decorous, but don’t be fooled – it’s an album of pure classical dynamite from this astonishing Kazakh genius. Recommended, but be sure to approach with lead-lined tongs and protective goggles!