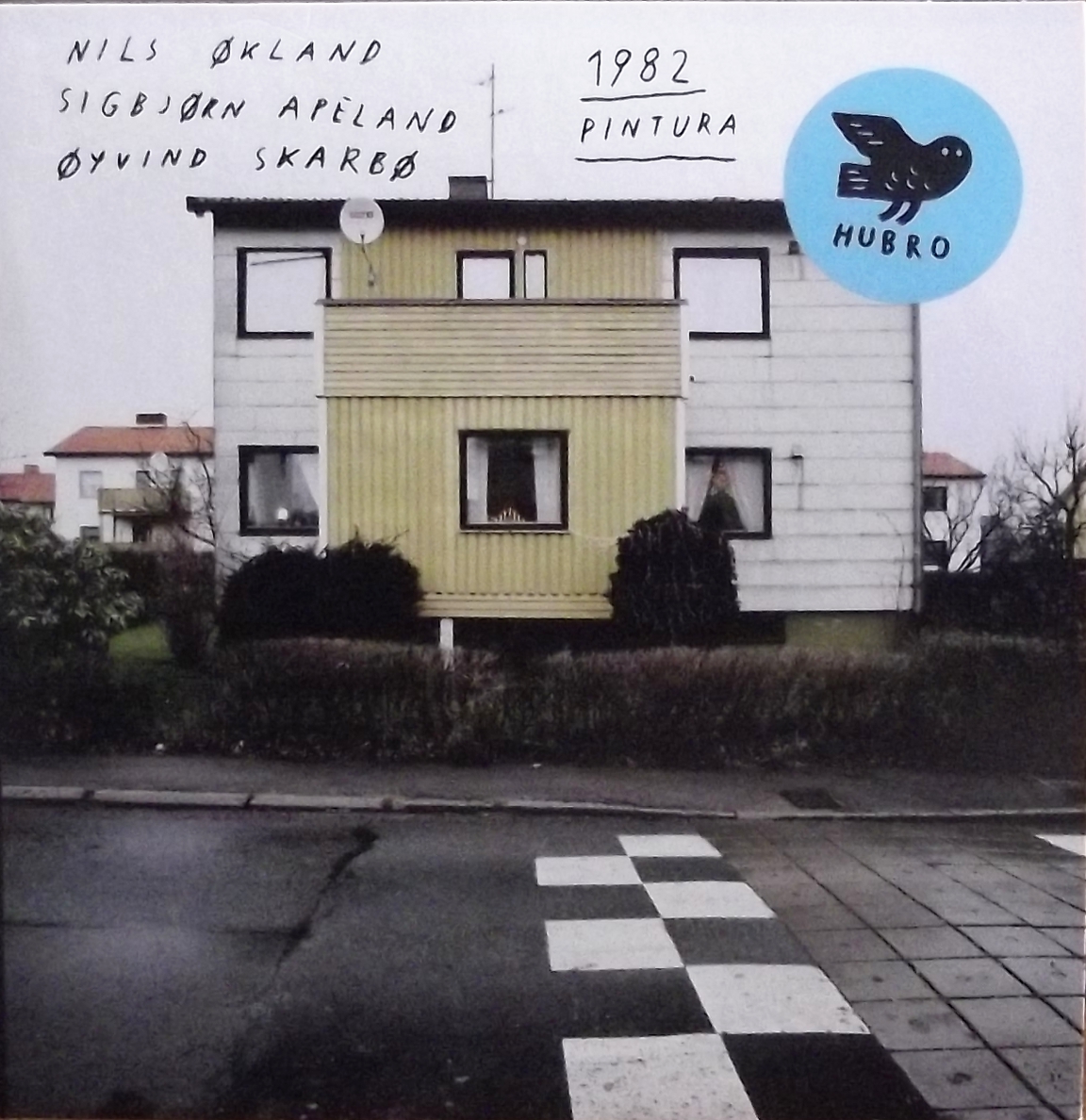 The 1982 Trio – they simply call themselves 1982 – are three Norwegian players who play all-acoustic music with violin, harmonium and drum kit on Pintura (HUBRO CD 2510). With this simple set-up they achieve some remarkable sonorities and combinations of tones that are extremely satisfying, the extended notes of each violin stroke fusing with the languid sighs of the harmonium, allowing each taut percussion note from the drumkit to ring out like a small lead pellet from an airgun. In the hands of more impatient musicians, these instruments could lend themselves to performing modern jazz music of some sort, but 1982 are largely concerned with creating introspective, slow-moving and melancholic instrumentals, none of which have titles and are suitable for observing natural landscapes or under-furnished interiors. One of my personal favourite King Crimson pieces from the 1970s is a semi-improvised tune called ‘Trio’ which featured the interplay of David Cross’ violin and John Wetton’s bass with the mellotron playing of Robert Fripp. If you heard that, and you like it too, then Pintura is sure to please you. The clear, no-frills recording quality on this album is the work of Davide Bertolini working at the Grieghallen Studio in Bergen.

Full-bodied free jazz saxophone honk-a-ma-thon from Wolf Scarers, who are the duo of Keith Jafrate and Simon Prince. On Throat (THE NOISE UPSTAIRS NUS004) they both wield tenors like two Scots kings fighting with claymores, although Jafrate has an alto sax sellotaped to his midriff and Prince has a couple of flutes secreted in his enormous boots. Both these English hooters are long-established as musicians, but they never played together until relatively recently when they shared a bill at a Huddersfield music festival. I’m surprised to learn that, as they seem very comfortable with one another, their brass members locking together as perfectly as the antlers of two rutting stags, each one knowing instinctively when to offer support and proppage to his partner’s wilder flights of pufferment and zany toots. They don’t rely heavily on attention-getting over-blowing effects, and both have a facility with playing clear melodic passages and well-controlled quieter segments that contrast nicely with the more raucous and growly interludes. Listeners are especially advised to note the 27-minute marathon ‘Flagstone’, a highly sustained and accomplished piece of improvisation that flows and seesaws in flawless acrobatic fashion. As you can see the cover art promises plenty blood, broken glass and maybe even bare teeth, and while Wolf Scarers are not quite as all-out violent as that, this is a hot little baked potato. The label, The Noise Upstairs, is also an improv collective and venue which operates in Manchester and Sheffield.

Intense and ugly electronic noise abounds when we enter the undersea world of Horacio Pollard, a Berlin-living musician who spends some time in the UK and runs his Neigh Percent micro-label. Baracuda (NEIGH%MUSIC), like the vicious sharp-toothed saltwater fish which is its namesake, rips into you from the start with acid tones, obnoxious feedback, and harsh shrieking vocalising. Each track is a short episode which ends as suddenly as a nightmare trip to the sonic dentist of pain. Yet we may peel away these crusty layers of noisy cottage pie to expose the sweet filling within Pollard’s music. He controls his powerful forces as surely as an occult magus, yet also knows when to allow his alchemical serpents to slip off the leash and slither wildly into the air with their feathered scales. The further we go into this short album, the more dynamic and textured the music doth become, such as the very enjoyable (to me) two-minute ‘Shephards Prop’ which in this context is almost like pop music. In fact there might actually be a conventional pop-music record lurking somewhere at the bottom of this particular foetid trifle. However if you prefer long duration and relentless attack, then click on to the 10-minute ‘Itching-Togo’ where your predilections will be fully satisfied. Nine tracks are advertised on this CDR, although my version of VLC Media Player will only recognise eight of them, and #6 won’t play at all.

Now for some Italian avant-garde Techno on a Ukrainian label. The duo of Plaster are Gianclaudio Hashem Moniri and Giuseppe Carlini from Rome who profess a liking for the same things that would have endeared them to Kevin Martin in 1997 and might even have earned them a spot on his Macro Dub Infection compilations, to wit dark ambient tones and dubby beats. Platforms (KVITNU 20) certainly delivers plenty of atmosphere and the rich, bass-heavy throbs on tracks such as ‘Component’ and ‘Structure’ will simultaneously induce narcolepsy and invite you to move up to an imaginary dancefloor where you can sway your etherised body and stamp your paws like a tranquillised polar bear. When it comes to actual melodies, each track is brutally simple, and refuses linear development or variation in favour of monotony and stasis. I’m not quite as keen on the beat-less trancey numbers which feel a bit sketchy and samey, but there’s only a couple of these; the album closes out with longer remix-style dub cuts like ‘Rearline’ with its crunchy white-noise pulsations, the slow and murderous mood of ‘Double Connection’, and the minimal electro-screech of ‘Trasversal’. Arrives in an elaborate black and gold foldout cover designed by the lovely Zavoloka, and there’s a three-minute movie by their friend David Terranova (stop motion and slow motion manipulations of a ballet dancer, footage tinted in blue and black) included as a bonus on the CD.