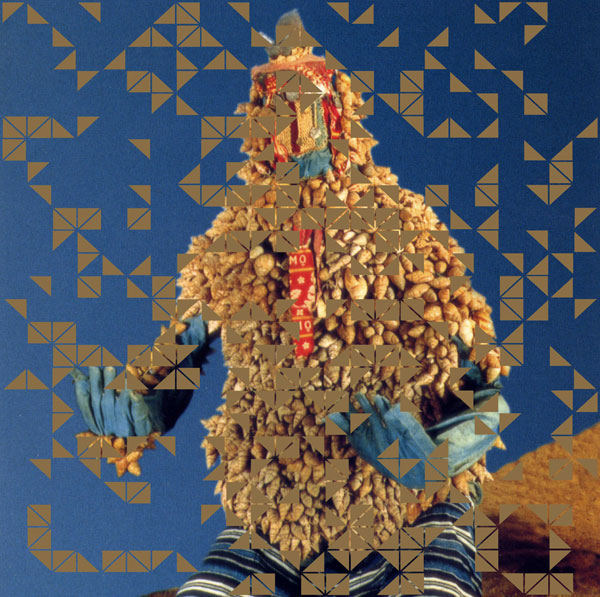 While we’re enjoying something of a Ghédalia Tazartès bonanza, seems the right time to mention this LP Repas Froid (PAN 17) which I’ve had lurking in the Summer 2011 bag for a while now. Unlike the recent Superdisque, Repas Froid does not feature the uncanny singing voice of M. Tazartès but is a tape collage suite which here is presented as two side-long suites on vinyl, although I gather it originally came out in 2009 as a CD on the French label Tanzprocesz, where it was divided into short index points and packed into an all-black cover. At first I thought this astonishing disc had been concocted from lost audio tracks from the cinema of Jean Renoir, but it seems the aural bricolage has been assembled from Tazartès’s personal audio archive. It’s mostly human voices, young and old, male and female, speaking or singing in French and perhaps other languages, cut up or fragmented or simply allowed to spill forth their inner ramblings at length; plus sound effects, bird song, and rare ethnic musics and rhythms gathered from exotic travels I can only dream about. The genius comes not just from the selection of sounds, which are fascinating enough, but from the careful assemblage and editing, and the making of judicious tape loops and repetitions to underscore certain points and not just done for the purpose of creating weird rhythms to mesmerise your mind. The creator’s unexpected juxtapositions and intelligent clashing of elements bring home a particular view of the world. Many voices are cut in at the moment where their emotional pitch is at its highest, starting with the anguished family dispute which opens side one. The old saw “all human life is here” is totally inadequate to express the depths and peculiarities of the human race which this LP presents to us. It’s true that most of the surprises and emotional jolts are on side one, but if side two’s global survey of the magic and beauty of the human singing voice does not provide you with a source of continual amazement, I’ll eat my own hat. Which brings us to the mystery figure on the cover, of which I have a monochrome reproduction on my promo CD, but as usual I will endeavour to locate a full-colour version for your visual stimulation. Another treasure from the small but select Pan label.

Driphouse (SPECTRUM SPOOLS SP 008) is another example of overlooked electronic music in the ongoing series from Spectrum Spools. Daren Ho plays synthesizers and electric piano (I think) on a release that originally surfaced as a limited run cassette on Root Strata. Driphouse bubbles up with some attractive old-fashioned sounds and has a pleasant pop-art colourful sheen, but for me the music just feels slack and disorganised; not enough effort was spent on making coherent arrangements, melodies, or musical patterns.

Bloater‘s Radiac (NO LABEL) is a very satisfying chunk of improvised noise made from the electric guitar of Steve Smith and the electronic noise of Ken B, who recorded this in Brooklyn; I’m not sure how I got hold of a copy unless it was sent along with a package from P.A.S. The duo are proud of how they produced this music out of single takes with no overdubs, and the strong impression is that they’re tearing this uglified gloop straight from their own innards, letting it pile up around their ankles in twisted ropes until the local dogs scurry in and scavenge these intestinal leavings with their foaming jaws. No rhythms or structure to these groaning drones, but they are packed with dynamic twists that wrench your body around every 60 seconds, and the black emotion is raw, palpable and direct. These filthy musical eruptions are produced as a specific criticism of Radiac Research Corporation, a radioactive and hazardous waste storage plant that since 1978 has, many claim, been polluting the Williamsburg area and contributing to local incidences of disease. There’s plenty of information about this environmental liability included on the CD insert. No doubt the toxic subject matter accounts for the slippery, slimy and sludgy nature of Bloater’s environmentally-aware music on this release. And the blurry front cover photograph is none too reassuring either, suggesting a massive billow of black sludge in the water, with radial lines either side that could be the timbers of a boat or an X-Ray of a human ribcage clouding over with cancerous darkness. The printed insert is a direct statement on the situation, but the music is more oblique; it’s as if the duo have, for one hour, transformed themselves into cancer victims, out of sympathy.

Here is I think the last of the CDs sent to us by the Italian guitarist Elia Casu in June 2011. For OSTinLOOP (PUSHIN RECORDS PH1005.2), he teams up with the bass player Matteo Muntoni and the drummer Stefano Vacca, and as the Piccolo Ensemble Elettroacustico they perform one original composition and six pieces composed by Ennio Morricone, most if not all of them drawn from his famed Sergio Leone soundtrack scores. As such, this is a far more melodic and structured record than Casu’s other releases of lengthy and sprawling improvisations for abstract guitar, but he still allows himself and the other musicians plenty of room to improvise quite freely on the Morricone themes. When the original Morricone melodies do surface in the middle of these jazzy suites, it’s quite unexpected. It is to this trio’s credit that they aren’t setting out to produce a slavish imitation of the Morricone orchestral sound as directed by Bruno Nicolai, but I feel they’re doing this at the expense of many of the original music’s best qualities. Morricone’s gift for unforgettable tunes, taut arrangements, unusual instrumentation and spine-tingling tension in every chord are overlooked in favour of spacey jams, “tasteful” and rather ordinary sounds, and self-indulgent soloing. The main melody of ‘Giu La Testa’, one of Morricone’s strongest and a personal favourite of mine, is rendered in a particularly ineffectual and perfunctory manner. Adding vocal samples from the films to the mix hasn’t helped restore much excitement either. On the other hand, on its own terms this emerges as pleasant and well-produced melodic jazz music.