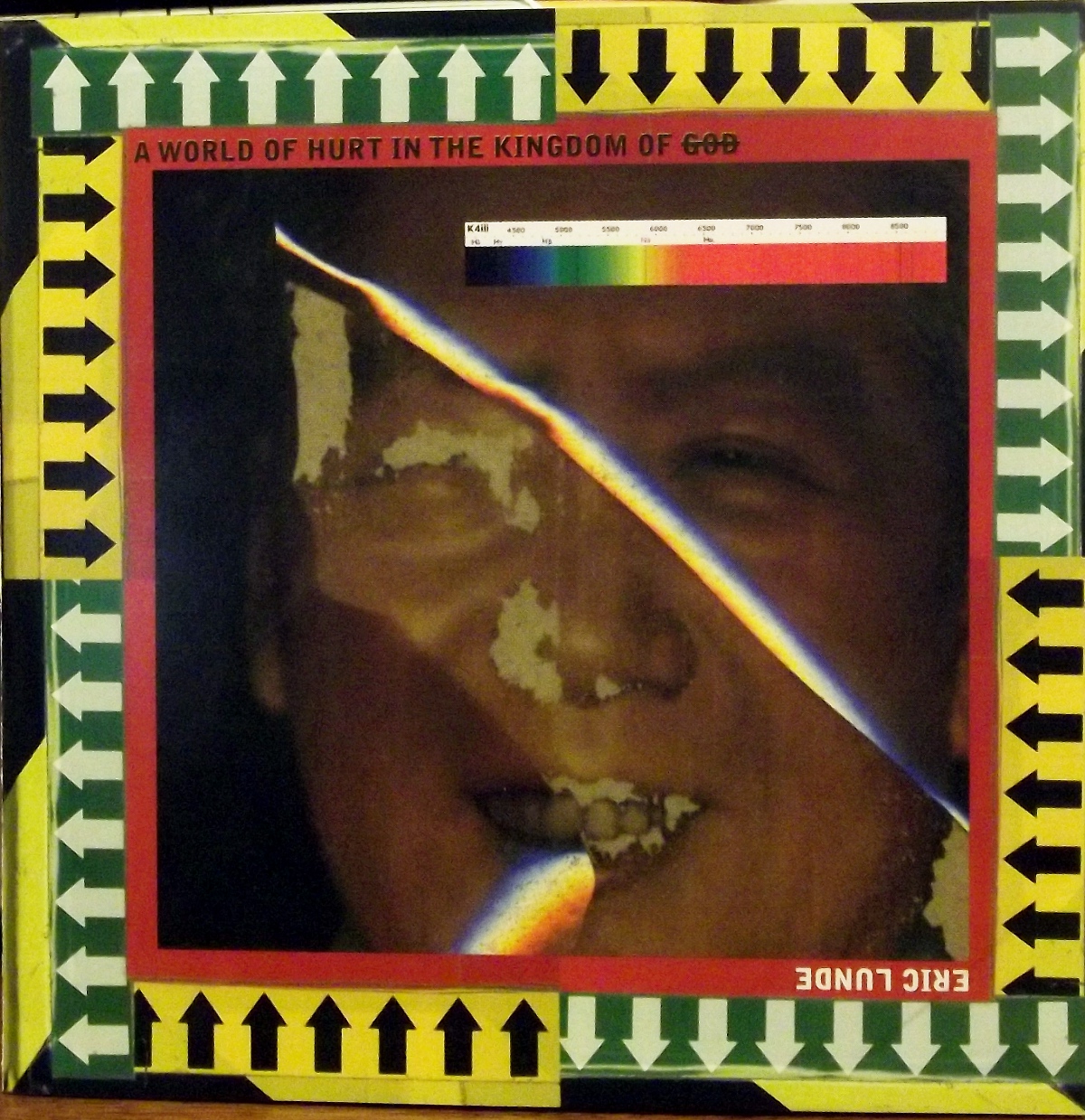 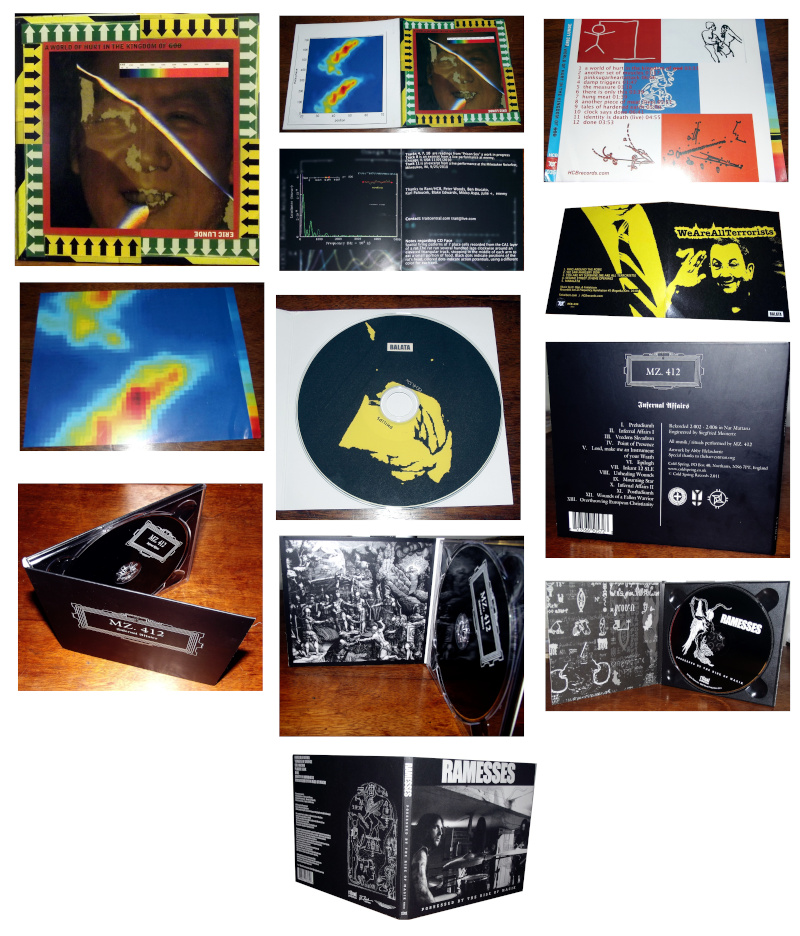 A couple of items from the Israel label Heart & Crossbone, which has for some years now been feeding me with mind-blasting examples of obscure extreme metal music in many mutant forms. This record by Eric Lunde is not in that genre, but is more like abrasive electronic art music from this Milwaukee industrial musician who used to be part of Boy Dirt Car in the 1980s. He has since proved his mettle as a visual artist, poet and writer, and produced books of his art prints as well as some 35 solo albums. A World Of Hurt in the Kingdom Of (HCB 035) comprises some very bleak and fascinatingly mesmerising stretches of monotonous, claustrophobic electronic music, which simultaneously envelop you with the cold comfort of an ice-cold hot water bottle and repel you with their inner core of seething hate. Not an assault of noise music, this is a creeping disease of sound that winnows away your outer defences with its ghastly lurid effects, vile buzziness, and unpleasant distortion. Among these 13 tracks, two are extracts from live performances, and three comprise readings from a prose work entitled Prison Sex, a counsel-of-despair polemic which outlines mankind’s dilemma in stark tones, resigned to what Lunde regards as the permanent state of cruelty and inhumanity in a literally God-forsaken world. There are some performance artists who use their recits to express vehement rage and outbursts of anger to vent their frustration. Eric Lunde, by contrast, seems to be utterly defeated and drained by his pessimism as he wearily delivers himself of these bitter spoken-word rants, some of them spiced up by many four-letter words and strewn with many unpleasant images, thoughts, and deeds. ‘Clock Says Done’ may be a key track, its sense of utter finality leaving you in no doubt that we’re hearing a mind at the end of its tether. A strong piece of work which may not be to everyone’s tastes, but the grisly brooding music Lunde makes is crucial, and abides in your system as efficiently as a virus.

The searing record by Balata carries the incendiary title We Are All Terrorists (HCB-034), a record made by the duo of David Opp and Aviad Albert. David Opp (Openheim) owns the label and is also a member of Lietterschpich, Cadaver Eyes, and bARBARA; as Cadaver Eyes, he also made Mesarveem Lihyot Covshim (“Refusing to be Occupiers”) with its bomb-blasted building cover art in 2010, letting you know how he feels about the Arab-Israeli situation in a way we cannot possibly misunderstand. This new release picks up the theme. While taking its name from a Palestinian refugee camp on the West Bank, the band hurls its sonic-doom venom grenades at specific targets – the Israeli government, its army, and its citizens, with the singer railing against what he perceives as needless cruelty and political apathy, but also the sheer madness brought about by random decisions made by the madmen in charge. All five short songs on this CDR are disguised under pseudo-sweet titles on the back cover, but you need only spin the disc to immerse yourself in inchoate metal doom rage where every drum beat is a hammer blow on the coffin of humanity, or something like that. The singer is screeching fit to propel his viscera out through his nose, but if there’s any lyrical content to match the anger (e.g. political slogans, critiques, incitements to uprising) it’s all buried in a stew of distortion and noise. However, a few moments spent in the midst of this maelstrom of disconnected metallic horror with its spastic stop-start rhythms and near-unlistenable feedback grind will convey the reality of an insufferable situation apparently characterised by absurdity, blindness and flailing fury. Borrowing its title from The Pop Group and quoting Mark Stewart in the press release, this is a record that doesn’t intend to let anyone off the hook easily, including us poor schmoes in the audience. 30 minutes of severe mental discomfort await the listener brave enough to admit this CDR into their home.

Now for another record of black doom noise, but situated in a rather more fantasy-like occult setting than the two previous items, which are each determined to face reality square in the eyes and stare it down. I refer to Infernal Affairs (COLD SPRING RECORDS CSR146CD) by MZ.412. I’ve been working my way steadily through the items in this series of reissues since December 2010, and I sincerely hope this is the last one. 1 To reiterate, the Swedish genius Henrik “Nordvargr” Björkk who calls himself Kremator is the principal creator for this music, regarded by many as an innovative strain that blends industrial noise and Black Metal in a lethal cocktail. While he’s sometimes aided by collaborators, it so happens Infernal Affairs is a solo record, and it’s one of the bleakest and most terrifying in the set. Ghastly electronic sounds, militaristic drum beats and inhuman whispered vocals conjure up dark stories of the legions of the damned gradually taking over the civilised world. Track titles such as ‘Wounds of a Fallen Warrior’ and ‘Overthrowing European Christianity’ confirm the destructive and nihilistic agenda of MZ.412, as indeed do the other albums in this set, and the ambitious sweep of the man’s totalitarian vision is extremely single-minded. Very little in the way of tunes or songs on this record, rather more a collection of stern and depressing atmospheres swathed in sub-zero blasts from the Russian Steppes, but they are very unusual and unique musical statements of understated power, never once slipping anywhere near the familiar pitfalls of the “dark ambient” genre. Indeed Björkk prefers to think of his performances as “rituals”, and there’s plenty of evidence layered into these dense cuts to suggest he does a lot more than enter a recording studio with lots of synths and microphones, perhaps enlisting support from the diabolical hordes. The powerful imagination at work behind these chilling, ice-cold doomscapes is considerable.

About time also we took note of Ritual Productions, the London label which kindly sent us a couple of albums by Ramesses in September 2011. Possessed By The Rise of Magik (RITUAL PRODUCTIONS RITE010) is a great slab of good old-fashioned occult heavy metal, complete with a cover decorated with arcane symbols and signs; recorded in a studio in just two days with only a few overdubs for vocals, the music shows this English trio creating that delicious brand of thick, overloaded evil guitar music that is meat and drink to Black Sabbath fans like myself. The drummer Mark Greening is pretty much the founding member, who put the band together with Tim Bagshaw and Adam Richardson in 2003 after he left Electric Wizard, another splendid English metal combo in thrall to the Sabs. Feel free to enjoy the sensations of being bludgeoned by mighty bass guitar throbs, drenched in excessive power-chord sweeps, and sent into a fitful sleep-state by the relentlessly circling guitar riffs, but it’s the exceptional drumming of Greening that truly makes Ramesses stand out in this already overcrowded field. His main skills are that he knows when to leave gaps, and even when to stop altogether, without ever letting the music come to a dead stop in its ceaseless crawling along its abject path. Even more impressive is that he can do this at such a measured, slow pace; that’s real assurance for you. The guitarists perform well, but the drums are truly at the core of the Ramesses sound, directing and propelling each sickening fuzzed-up guitar solo and bass whomp to give it additional punch. Where MZ.412 intends to bewitch you with his complex Arthur Machen styled fantasies, Ramesses entice you into a world of witchcraft and black magic through suffocation, prolonged sessions on the rack, and beatings with iron rods, thusly producing a sensation in the listener amply described by the track title ‘Safety In Numbness’. In fine, lovers of rich, noisy metal and sludgy doom will not feel short-changed by this album.