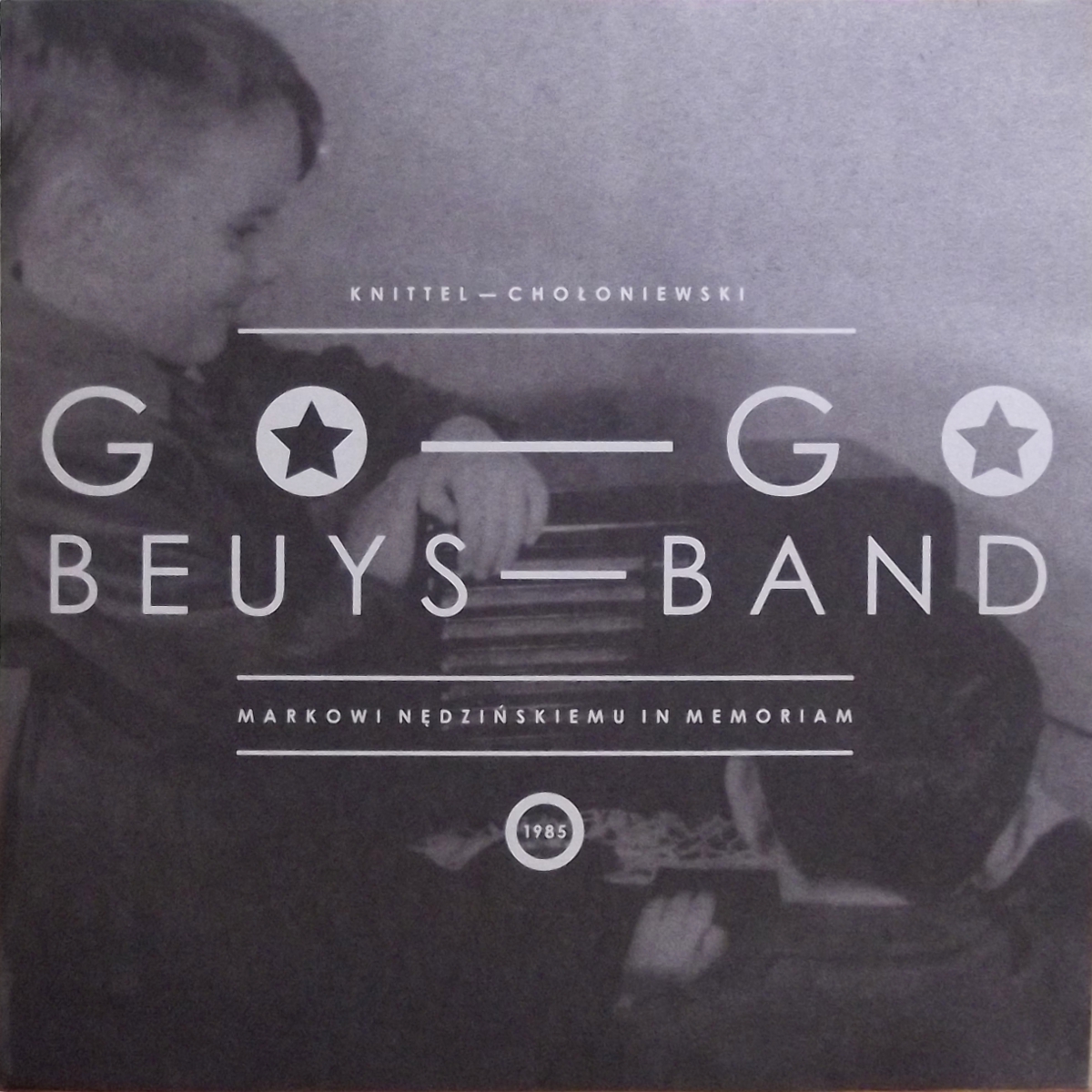 A very fine avant electro-pop oddity from Poland’s Audio Tong label. Go-Go Beuys Band (AUDIO TONG ATCD17.2011) rescues 1985 studio recordings put together by the composers Krzysztof Knittel and Marek Choloniewski, working with their guitars, synths and beatboxes at the Electroacoustic Music Studio in Krakow. That’s odd enough already for me – 1980s pop music being produced at an experimental studio by modernist composers. They were joined by the saxophonist Marek Nedzinski and the singer Olga Szwajgier, plus Janusz Dziubak (a 1980s free improviser who made the LP Tytul Plyty in 1984) contributing the texts for a couple of tracks. By this collaborative effort, they arrived at their own twisted brand of synth-pop music with weird vocals, solid drum machine rhythms and stark melodies picked out on Roland and Yamaha synths, coming close to the same sort of sweetly-rendered dementia as Ptôse, The Residents, or Cabaret Voltaire (although other writers also make comparisons with Throbbing Gristle, Faust and Kraftwerk).

This CD consists of two separate suites, Automatic Pilot and Go-Go Beuys Band, both of them excellent and bizarrely entertaining warped pop music, although Automatic Pilot scores slightly higher for me with its adherence to brevity, its crisp three-minute pop tunes and winning off-kilter melodies. Then again the second set has more prog-like variety in its instrumentals, there are more and lengthier saxophone solos, and the vocals are slightly more declamatory and sonorous, as if reciting an Eastern European morality tale or political diatribe rather than spewing the usual pop-song fare. The singing voices throughout are one of the oddest elements; where the keyboards are relatively familiar, the unusual vocal intonations of Knittel, Choloniewski and their friends take us directly into Eastern European art-rock territory. Don’t be misled by the apparently conventional song titles like ‘China Wedding’, ‘Heavy-Love’ or ‘Rock-Body’; this is 1980s pop music rethought as a surreal pastiche of elements, including both high-art modernism and moments of supreme kitsch. How many other bands would have the sheer audacity to conflate the work of severe conceptualist Joseph Beuys with disposable pop music in their name?

The operation seems to have a semi-temporary studio affair for the most part, although we are informed the two main protagonists did perform some concerts in Poland, Austria and Germany in 1986; and they may or may not have been responsible for other lost, unknown, untraceable and non-existent band projects called Island Of Love and Non-Existed Monastery Group in 1987. On this matter, the elliptical sleeve notes remain obscure, and maybe even the enclosed photographs are part of a conspiracy of misinformation. Nonetheless, the music here is excellent – melodic, oddball, parodic, slightly dark, and beautifully realised. Just imagine what would have happened if this team had been chosen to produce a single for Tears For Fears, Wham or Madonna. The results might not have been world-wide smash hit records, but they would have been distinctive and intellectually satisfying, pop history would have taken a different turn, and we wouldn’t be in the mess we are today. Available in an outsize card cover about the size of a seven-inch single, or can be downloaded in a digital manner for 7 Euros.

Speaking of avant-garde composers producing pop music, when I heard the 2007 CD issue of Out Of The Blue by “Blue” Gene Tyranny, I waxed lyrical about what might have happened if this lovely US composer had gotten the chance to produce Joni Mitchell or Steely Dan in the 1970s. When you hear the immaculate songs on that CD, you’ll understand what I was blathering about. Now here comes Detours (UNSEEN WORLDS UW07) from the same label, released January this year. No songs this time, it’s all solo piano music by this Mills College maestro, and apparently the first time he’s released an album of new piano works since 2003. However, it is likewise immaculate music which you should all welcome into your homes. There’s the 12-minute suite ’13 Detours’, short compositions that feel like an update on Mussorgsky’s ‘Promenade’ as Tyranny ups the ante and leads us into philosophical diversions of thought, using a form of mental gymnastics learned from the San Francisco composer and film-maker Phil Perkins. It’s music for taking a walk outside your own mind. This turns out to be an underpinning theme for the album, proposing strategies for forms of mental liberation. Even the front cover depicts a “helping hand”.

On the long piece ‘George Fox Searches’, Tyranny uses the sleeve notes to tell the remarkable history of the 17th-century Quaker George Fox, who fled religious intolerance in England to settle in America where his enlightened visions about tolerance, peace and compassion found a more receptive audience. A self-declared agnostic, Tyranny has nonetheless attended Quaker meetings in his time and drawn inspiration from the silence of their prayer meetings, and the spontaneous utterances which might occasionally reveal deep truths; these experiences he effectively recreates in real time on this gorgeous 20-minute piano work, and with characteristic understated genius he also manages to layer in subtle references to the life of Fox, creating music that matches well with Fox’s psychological condition as he undertook his spiritual journey with uncertain steps. Warmth, sympathy, honesty; all good things I associate with this musician.

‘She Wore Red Shoes’ was composed in 2004 as a dance piece for Stefa Zawerucha. In that symbolic work, she enacts a dilemma about life choices no less crucial than those faced by George Fox; the dilemma is represented by a large mandala drawn on the dance floor, sliced into portions that represent past and present influences on her existence. Tyranny’s sprightly music here, a sort of syncopated foxtrot, suggests the protagonist faces her dilemma with calm unwavering dignity, and at the end she “abandons her former life” without regret.

The five-minute ‘Intuition’ piece, though the shortest on the album, is much harder to sum up. In six minutes the uncertain and ambiguous piano and tape music seems to drift freely across an abstract realm of thought where almost anything is possible. This seems appropriate for a work where the composer is trying to digest and sum up various conflicting “cosmological views” of existence, in the end shrugging his shoulders and admitting “I haven’t got a clue”. But he goes on to state he intends to “re-imagine the nature and role of music”, an ambitious undertaking which is performed in a quiet and modest fashion, and like the ’13 Detours’ piece it passes on something useful about the process of thinking intuitively. A very satisfying and approachable record of modern music, rich with ideas and humanity and refreshingly free from any form of arrogance, pretentiousness or impenetrable mysticism. Also available as a limited edition LP.