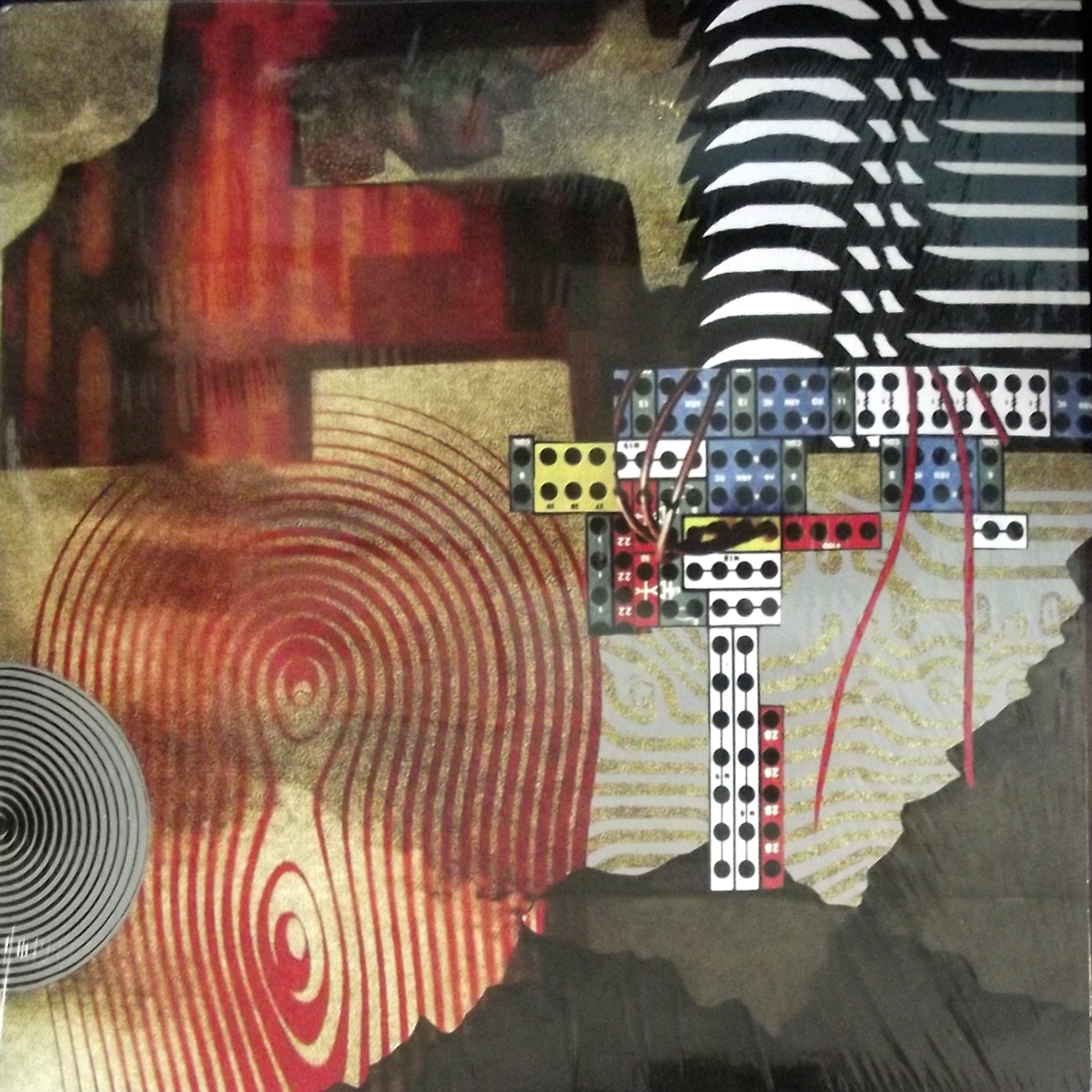 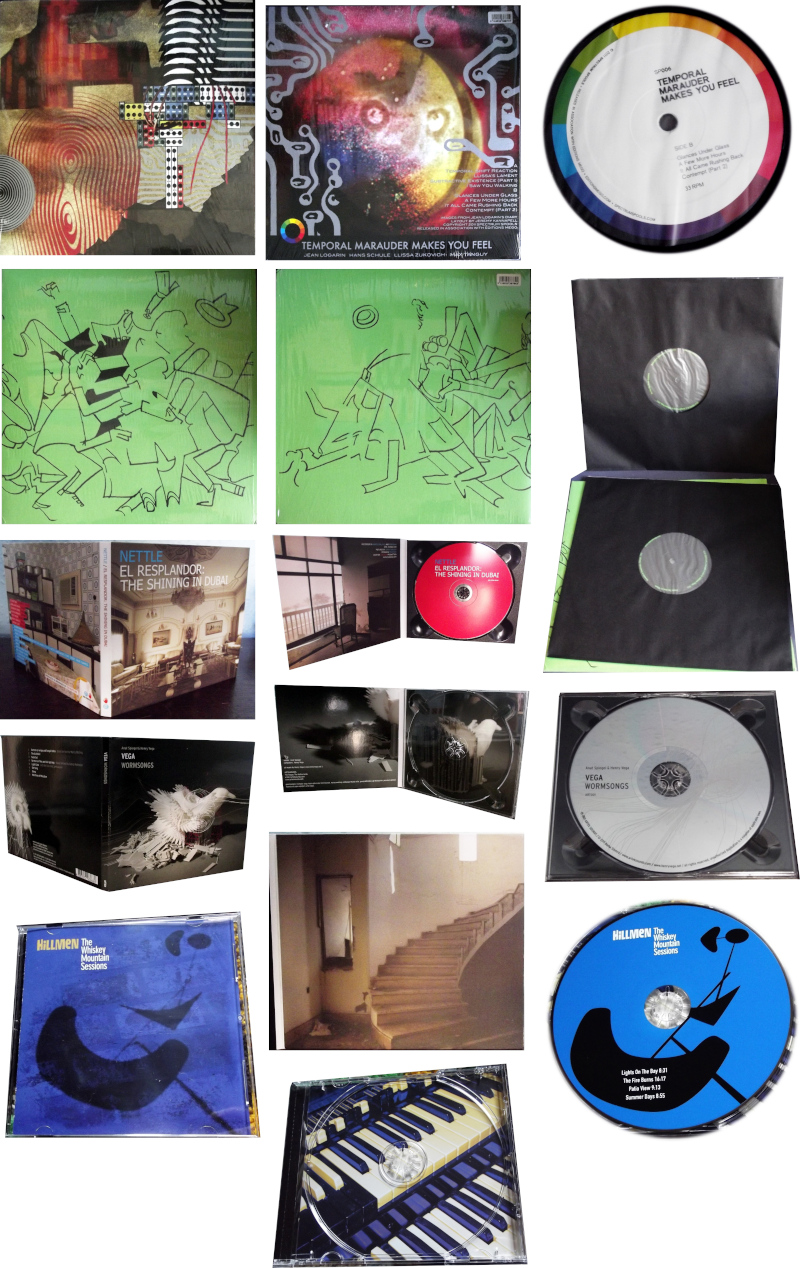 I keep trying to find a way in to decode the abstract and slightly illogical electronic music of Jim O’Rourke on his double LP Old News #5 (EDITIONS MEGO OLD NEWS 5). It’s four separate pieces, one side each, drawn from O’Rourke’s personal archive of his recordings, made in Chicago and Tokyo, but taken together the album amounts to a labyrinth, multiplied to the power of four. It’s very puzzling stuff; each piece proceeds quite slowly with monotonous drones, yet within that slow-moving framework there can be a rush of detail. As soon as I think the piece is going to resolve into something resembling a tune, it dives down a side-turning where digital white noise and glitch are the order of the day. To me it’s a rather disjointed listen, not to say that the music is fragmented or composed of multiple edits, just that I can’t connect the dots or follow the lines of thought of this inscrutable American laptop music pioneer. Even the sleeve image is hard to read; it looks like it’s going to be a crowd of people in the street, but their arms and legs are incomplete, they have no faces, the lines don’t quite join up, and there are odd geometric shapes piercing the picture plane, further disrupting the visual flow. This is the first of many such packages where O’Rourke will retrieve and issue such works from his voluminous hard drive, so maybe when the series is completed it will make more sense to me.

Likewise, I honestly wish I was deriving more pleasure from Temporal Marauder‘s Temporal Marauder Makes You Feel (SP 006), an album on the Mego sub-label Spectrum Spools. Unlike Old News, there’s less of a problem finding a way into the sound; the surface is appealing, rich layers of electronic music often propelled by enjoyable pulsebeats, plus sequencer patterns, filters, effects and dribbling beepy noises. Sampled voices occasionally murmur unintelligible statements, and short simple keyboard melodies are buried everywhere in the morass of detail. Once the initial charm of the sound wears off, I find myself wishing each piece would develop into something and move forward, but all eight tracks inevitably just keep on chugging away in neutral. This is largely the work of Jean Logarin with the percussionist Hans Schule, recorded by Max Tanguy. There is a back story to the record which would have us believe it was recorded in the 1970s and is now being presented in its re-edited form as a lost treasure of “kosmische” styled music, but I’m not having any of that. I can’t really place any credence in this wish-fulfillment fantasy.

With an album called The Whiskey Mountain Sessions (FIREPOOL RECORDS FR002) and a band name Hillmen, I was half-expecting this Californian band to deliver a post-modern update on 1920s country or jugband music. Instead the four players Hillman, Ellett, Murray and Rivers produce four lengthy jam sessions of improvisation using guitars, keyboards, bass and drums, resulting in competent fusion jazz, produced with very little studio intervention or overdubbing, in order to preserve the spontaneity of their work. The results come out like a slightly rougher version of an Al Di Meola LP. Nothing very innovative going on here I’m afraid, and I distrust sleeve notes that use superlatives like “magical…profoundly creative…transcendent dimensions…transformational power” so liberally. This is released on the showcase label of the avant-rock band Djam Karet.

Vega is the the team of Henry Vega and the singer Anat Spiegel. On Wormsongs (ARTEKSOUNDS ART001), Mr Vega spins very delicate digital backdrops of glitchy ambient music to support the fragile and breathy intonations of the songstress, and a mysterious web of artifice appears in the dusty attic corners of your mind. Marco Molling and Georg Hobmeier provide the textual starting points for a couple of tracks, and the percussionist Bart de Vrees appears on ‘Light Code’. At first the ambient tones seemed a shade too familiar and ordinary to me, but after a more determined listen I’m gradually succumbing to the minimalistic charms of these lightly throbbing drones and brushy percussive effects. I’m arriving at the conclusion that Henry Vega is a very abstemious miniaturist, one who distils his musical output with as much care as a chemist of the 17th century. Likewise, Spiegel may be the most mannered vocalist you’ve heard this side of Lene Lovich and Nina Hagen, but she is wound as taut as a watch spring and seems to be forcing each musical droplet out of her pipes as though there were a narrow-necked spigot attached to her throat. If you’re expecting a sort of post-modern operatic soprano, she’s actually much less stiff than that; she’s very adept at holding on to a monotone and working the note into the ground, as she twists her tongue around some very spiky syllables and difficult sibilants with ease. This is the case whether working to a text, or scatting with her unusual wordless moans. Brittle, fragmented, perplexing.

A curious undertaking by Nettle has resulted in the album El Resplandor: The Shining In Dubai (SUB ROSA SR324). The subtext is that DJ Rupture had a momentary brainstorm where he transplanted the events of the Kubrick film The Shining into Dubai; if we play along with this fantasy, then the images of a luxury hotel in the Arab Emirates on the CD front cover soon give way to desolation and poverty with the shabby and deserted interiors we see in Lamya Gargash’s photographs when we open the gatefold. This before-and-after scenario may be read as an index of the deterioration of the caretaker’s mind in the original story, and it also works as a comment on the current global financial disaster; after all the opening line of Geoff Manaugh’s short story, provided to bolster the idea, is “They came to Dubai on the promise of easy money”. Musically, the work offers a melting-pot of styles, including improvisation, electronica, classical chamber music, and folk music of Africa. This reflects the mixed stylistic backgrounds of the six talented players who help DJ Rupture to realise the work, among them the guitarist Andy Moor and the cellist Jennifer Jones. It’s fine instrumental music with plenty of atmosphere and undercurrents of menace suggested by many minor keys and quirky melodies, which befits this quasi-soundtrack to an imaginary film; spirits and ghosts are floating around every stairway, strongly suggested by the dispassionately gorgeous chanting of vocalist Lindsay Cuff. The track ‘Simoom (Wasp Wind)’ stands out as a painful noise piece, where the spiky electric guitar of Moor is given license to whip up a storm, and the track works into a frenzy of spiralling mayhem with percussion, vocals, loops, and electronic processing. The string players are all excellent, producing crisp lines with assurance, bending notes and creating unusual effects on their violins and cellos, and providing a perfect counterpoint to Rupture’s electronic melodies, as on ‘Espina’ for example. This just in: I learn that Geoff Manaugh writes about architecture. So El Resplandor works as soundtrack music, but also has a spatial dimension, acting as a sort of conceptual work describing a promenade around a vast deserted building.