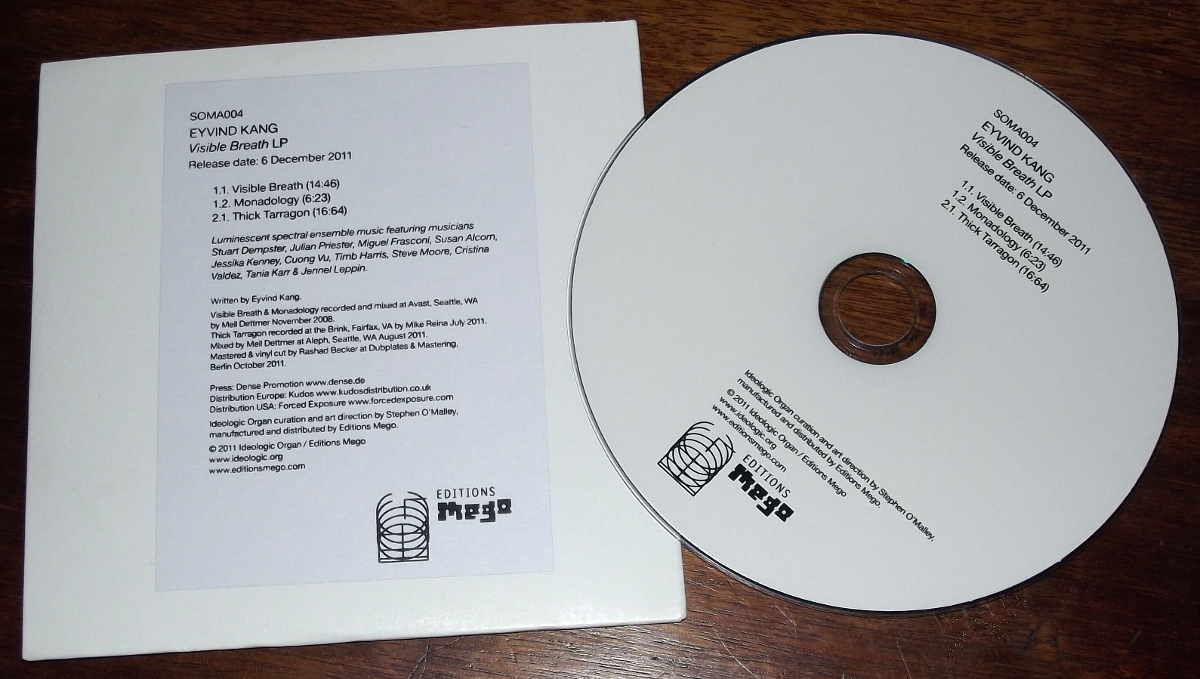 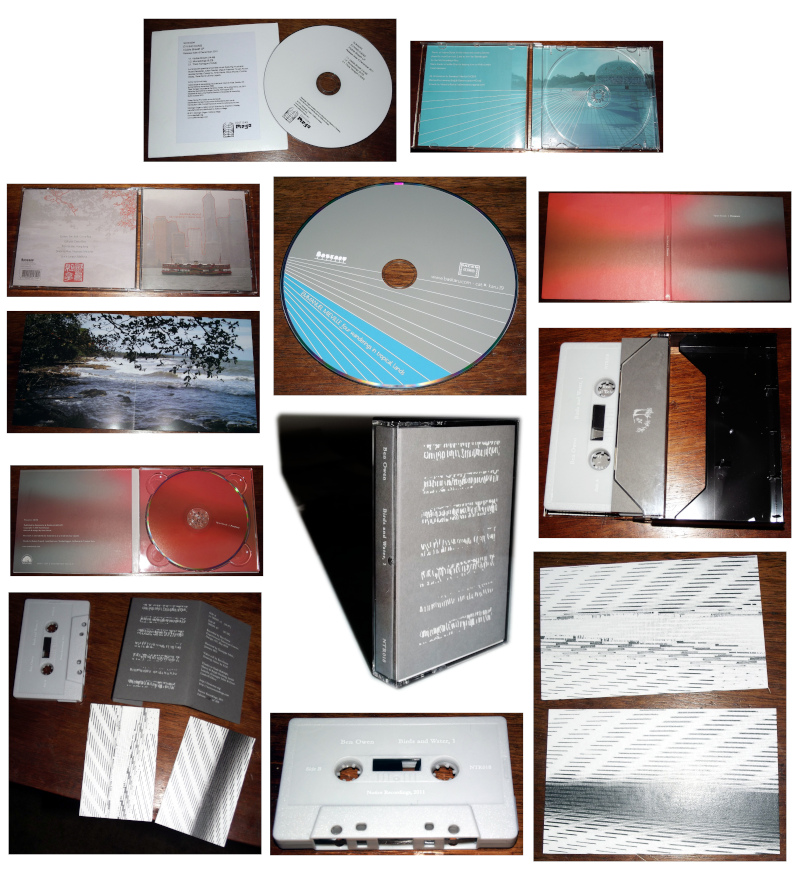 Eyvind Kang has realised an intense LP of enchanting and stark acoustic music with Visible Breath (IDEOLOGIC ORGAN SOMA004), clearly paying audible homage to the “spectral” composers of the 20th century, but also other important moderns such as Morton Feldman and Stockhausen. While he composed and played his viola, Kang was joined by a dream team of players in his ensemble – Julian Prester, the trombonist from the Arkestra; the New York composer Miguel Frasconi; the Vietnamese trumpeter Cuong Vu; and many others, including Timb Harris, Tania Karr, Stuart Dempster and Susan Alcorn. The vocalist Jessika Kenney, who accompanied him on the astonishing Aestuarium (reissued by this label), is also a contributor. All the compositions feel quite open-ended in their approach, perhaps semi-aleatory, allowing for some improvisation; the title track is the one that most resembles Aus Den Sieben Tagen, albeit a much less flabby and self-indulgent version of that windy composition. And I cannot help but think of Morton Feldman’s work for small ensembles when I hear the exquisite plaintive notes of ‘Thick Tarragon’. All the musicians explore extreme sound ranges, including the lower depths of the piano register and the insistent high-pitched scrapes and plucks from the string sections. This is not an empty pastiche of former modernist glories, but a heartfelt and vibrant piece of living work, somehow reaching for ideals more perfect than humans can possibly achieve.

Some quite good field recordings by Emmanuel Mieville are presented on Four Wanderings in Tropical Lands (BASKARU KARU19). The lands in question are Costa Rica, Hong Kong, and Malaysia, and Mieville brings back the usual aural reports – insects, running water, traffic, dogs barking, birds, wildlife, and so forth. On the second track he plays some wood and metal sculptures. Parisian Mieville has impeccable credentials (studied at GRM, radiophonic productions, plays ethnic instruments) and his recordings are vivid and strong, while his editing strategy aims to subtly point out the contrasts between nature in the raw and the interventions of mankind. These vignettes may proceed at quite an unhurried pace, but there’s a lot of detail to be retrieved from Mieville’s wide-angle sweeps.

Ben Owen is the American sound artist who kindly sends us releases from his ultra-minimal label windsmeasure recordings, items which are often so inaudible that the sounds on the disc are barely there at all – quite often I think I just dreamed that I ever heard them. On Birds and Water, 1 (NOTICE RECORDINGS NTR018) Owen is somehow finding ways to go beyond ultra-minimal, with a cassette release that works very hard to push the envelope in terms of long duration, uneventfulness, refusal to admit variation, and the extensive use of low-key and indiscernible sounds that make about as much impression on the ear as a small feather denting the side of a granite mountain. Owen deploys his work at considerable risk of boring the audience, pushing the pain threshold beyond the impossibly dull and taking us into a new realm of dullness where deep aesthetic appreciation starts to take over 1. These pieces were created in 2010 at a place in New York called the Experimental Television Center, and are the result of processing audio and image information in exciting ways which I don’t fully understand, but the process seems to have involved vintage 1970s video systems (all analogue, of course) in combination with op amp generators. There have been many artists who attempt to probe the potential of abstract audio effects generated by video equipment, but often they end up wallowing in obnoxious system noise. Owen’s subtlety, control and mental rigour result in these very gentle and minimalistic effects, far more rewarding to my mind. On side one, this tape does everything it can to drill down into the very grain of microscopic sub-atomic sound, creating some mighty perplexing and oddly compelling effects. On side two, there is mostly a mechanical whine noise which will test your endurance to new limits. You might think I’m describing an insufferable way to pass 80 minutes, but Owen’s approach to this material is disciplined and thoughtful, and there is enough of an underlying structural pattern going on here to guide you safely through. You will come to love these inexplicable tiny chirring and chirping sounds and greet them as a Chinese mountebank greets a swarm of cicadas in the dawn light. Limited edition cassette of 200 copies with screenprinted covers and video still inserts on printed card,

The American sound artist Yann Novak mainly works with visuals and installations, so in one sense the Presence (HIBERNATE HB35) CD could be read as the soundtrack to such an installation, or another rendering of the same materials used in that situation; indeed it began life as an event performed at the Torrance Art Museum in 2010. His project intrigues me for its determination to transform the digital materials he collects and hoards, and this doesn’t just mean audio files – he reworks image files too, so maybe it’s possible that buried deep in his work we’re “hearing” the sound of a Tagged Image File. The images and sounds have personal meanings to him, and I’d like to think he curates his hard drive with the same diligence as Joseph Cornell used to tend to his boxes of objects and the magazines which he reworked into collages. Of course, by the time Novak has finished processing his materials, the results just sound like a nebulous veil of droney ambient minimalism with no tune, content, or meaning – at least that’s my impression of this CD. And yet a force still draws in the listener, as though the faintest possible “ghost” of the original digital files were still embedded in the smallest shard of sound. That, at any rate, is the intention, to pass on tangible sensations the audience can relate to. Sources in this instance were originally captured using a cell phone rather than a conventional microphone, and there was also a notion connected with ‘altered perceptions’ informing the work. Imagine the CD cover to this one blown up to 20-foot high projected images and allowed to meander slowly across the white walls of your local art gallery, and you’d soon be having some pretty ‘altered perceptions’ of your own. This may not be a record that you’ll find requires daily listening, but I do like the printed statement that it’s “intended to be listened to at a relatively low volume”. It makes a change from the usual “Play Loud” nonsense.