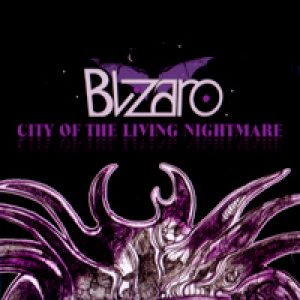 A surprisingly lively and fresh recording of retro-doom metal is this offering from the aptly named Blizaro, the one-man project of John Gallo who mixes analog synthesiser melodies, organ, traditional melodic doom and cinematic background music elements together with a dash of tongue-in-cheek humour. Amusingly the CD is divided into two parts, the first labelled “(Physical)” and the second part called “(Mental)”: I assume these labels are not references to forms of torture. There is so much joy to be had from this album that it seems much, much more than its 62-minute playing time and many listeners may be shocked to hear that it is nearly all the work of one person. Only one track, “Mental Disease Overture”, features help from two other musicians.

The CD blusters into action with the title track and what a piece it is: very lively and full of bravado with plenty of variety in the melodies and music. Tracks to watch out for include “Midnight Lurkers” (repeating guitar riffs of sheer sombre majestic quality that a million Sabbath wannabee bands would die for), “Castle of Darkness” (creepy synth aligned with acid guitar riffs), “Violet Cosmos” (a spacey wash-out ambient piece), “Catacomb Man” (a Frankenstein mishmash of burpy synth loop, organ sermons, creeped-out cavern atmosphere, syrupy washes and guitar fiddling among other things), “Portallucination” (treated vocals meet haunted-house keyboard melodies) and “Mental Disease Overture” (straight doom metal with a heavy, raw jagged edge and a washed-out vocal). Fans of Black Sabbath will note Gallo’s frail-prophet-in-the-wilderness singing owes a debt to Ozzy Osbourne himself. One notes also that track titles like “Ceremonial Bone Ritual” suggest a love for corny B-grade European art-house horror flicks rampant with sexy lesbian vampires, sacrifices of teenage virgins and scenes of too much gratuitous nudity. It would be very easy for Gallo to have delivered an album oozing with more cheese than Mouse Heaven but fortunately many tracks have a genuinely sinister atmosphere behind the apparent kitsch. It’s not unusual for songs to continually build up on one another, never letting go of listeners and revealing new terrors. “Relief” is not a word in Gallo’s dictionary!

Several songs like “Island of the Dead” are creepy and atmospheric enough that if Gallo so desired, he could remix them into mini-movie soundtracks. What movies could be made out of them, the mind all but boggles at: flicks about serial killers, vampires on the rampage, dissolute rich kids playing at pagan sacrifice and discovering the being they’re pretending to worship is for real and isn’t just joking, survivors of a plane crash stuck on an island populated by cannibals suffering from a rabies epidemic … people these days just don’t make movies like these any more.

This homage to Black Sabbath (the band) and “Black Sabbath” (the Mario Bava movie) was a worthy contender for Doom Metal Album of the Year in 2010 and still sounds very good and not at all cloying. Blizaro offers plenty of sinister atmosphere, spacey effects, nice gooey cheesy organ and analog synth tunes and very heavy sombre doom metal riffs that demonstrate Gallo’s loyalty to bands like Sabbath, Candlemass, Reverend Bizarre and Electric Wizard. The album artwork is very much in the same spirit as the album; it’s at once grotesque, creepy, hilarious and oozing with casein.