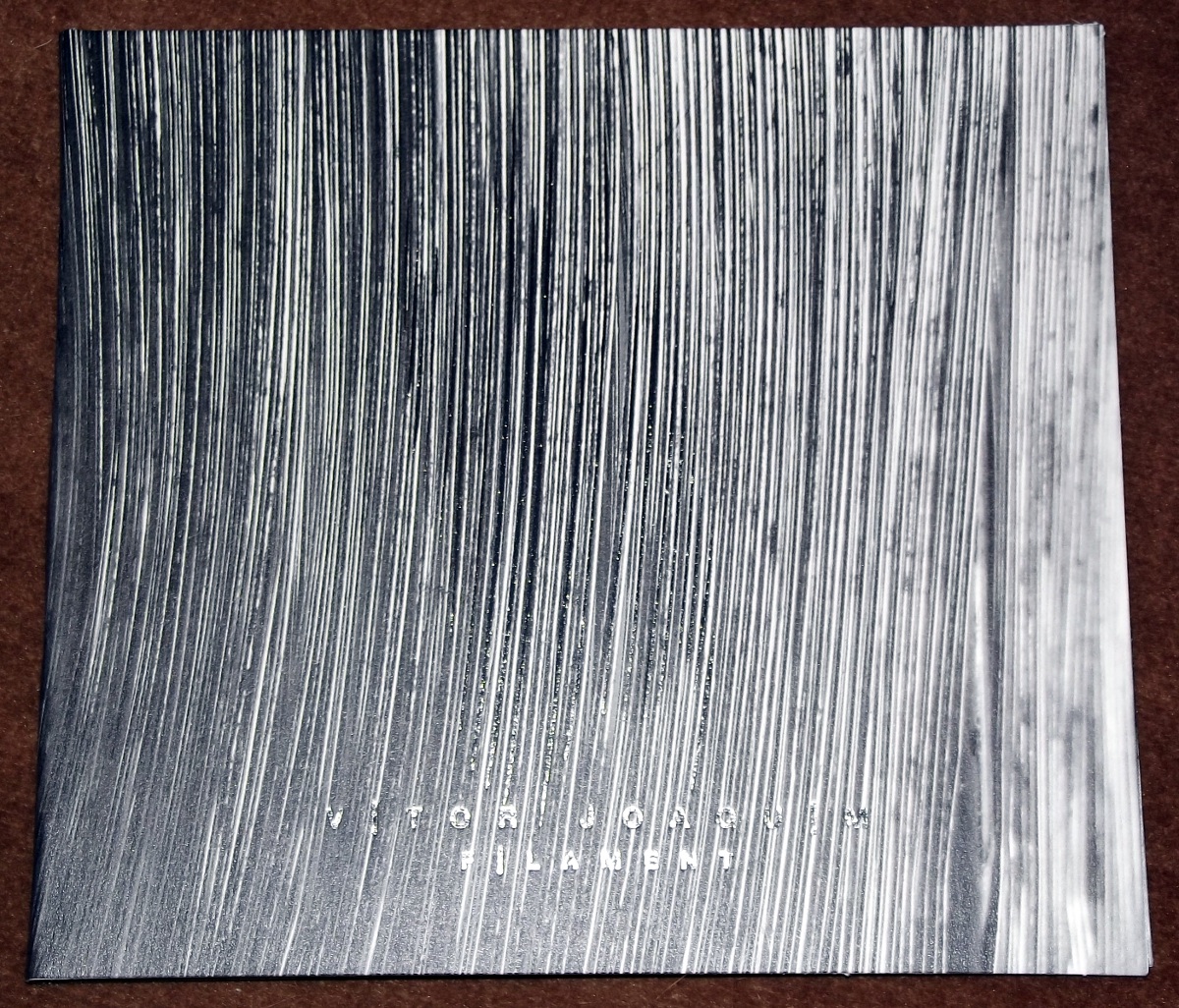 Space to think in Filament Form

Vitor Joaquim wages a one-man war against information overload on Filament (KVITNU 19), his CD of “complex, extended and nonlinear” digital music which arrived here in November 2011. This is a serious contemporary matter which many have noted and bemoaned probably since the earliest days of advertising, and it’s only getting worse with the unstoppable increase of web-delivered information, much of it trivial and absurd. Some, like Otomo Yoshihide, decided to adopt an ambivalent relationship for a time, and in the late 1990s and early 2000s some of his Ground-Zero releases were packed with sonic overload in the form of sampled musical data, yet he continued to produce great art out of this situation, sublimating the information bonanza and nimbly expressing his own love-hate relationship with it. Joaquim is unequivocal, by contrast, and fears that in 2012 we are gradually losing the ability to concentrate, to think properly about complex issues, even deadening ourselves emotionally to the point where we’re unable to feel anything real. The music on Filament not only serves as a riposte to this grotesque state of affairs, but it’s also an instruction manual for humans; in its multi-layered and richly ambiguous droning music, you may start to find keys and clues, directly translatable into methodologies which will help to sharpen your intellectual facilities, and restore your fading emotive powers. Death to the buzzword, the sound-bite, the facile solution and the instant reply. I think it’s especially telling that his titles incorporate the words ‘Voids’, ‘Walls’, ‘Conformity’ and ‘Devotion’. Conformity is part of the problem; the internet, capitalism, global travel and advertising are making all of us think, feel, talk and act the same. Devotion, which may be religious or may simply be the application of one’s faculties to engage with real thinking, is one solution. Fine greeting-card styled cover by Zavoloka for this sharp release, with embossed silver elements.

The Umbrella Man through Brecon Eyes

Some parts of the above rant may have appealed to the composer Erik Satie, whose piano pieces are often associated with a slow performance or a promenade around the park where we can simply take time to stop and stare. What would this cafe-society aesthete have made of the over-crowded blogosphere? His minimalist philosophy has been used as a springboard by later modernists, including Cage, Reich, Adams and others; I suspect he’s even been credited with inventing “ambient” music before Brian Eno. For a less formalist and far more imaginative take on Satie, may I recommend A Kiss For The Umbrella Man (QUIET WORLD 21) by Susan Matthews, the South Wales musician. She takes extracts from well-known Satie tunes and serves them up with her own unusual piano arrangements, sometimes allowing for the addition of recorded voices and other tape layers; even the sound of the piano is treated in suitably subtle electro-acoustic fashion. Classical purists would probably throw a fit after hearing eight bars of this, but Matthews has genuine affection for the music and reveals hidden truths in Satie’s music through her very creative exploratory methods. Unfinished, uncertain in places, and not a revolutionary art statement, but Satie’s gorgeous scales and chord combinations really sing under her fingers, although I doubt this album is intended to showcase a virtuoso piano performance as convention would normally demand. By which I mean the ideas of Susan Matthews are prioritised over technique, and that is a good thing. It’s as though an art student were allowed free rein to interpret the classics as they see fit, and I’d like to see more of that…in my ideal world this important stuff would not be left solely in the hands of the trained and established “experts”. Egads, only 50 copies were pressed of this lovely CDR, and I’ve had it here since November. Better order your copy sharpish. If it’s sold out, send an email directly to Ian Holloway demanding a repress. Tell him I sent ya!

I’m going to the promised land

Now for some up-to-the-minute classical composition from the New York composer Dan Joseph. He freely admits he’s steeped in minimalism and while pointing out that the genre (if that’s what it is) is over 40 years old now and sometimes causes him to wrestle with dilemmas about “what’s new” and “what’s next”, he’s pretty much given up trying to break the mould or innovate wildly. However, what boots it when faced with the charm and stark beauty of Tonalization (For The Afterlife) (MUTABLE MUSIC MUTABLE 17545-2)? This outstanding 2009 composition occupies 33 minutes of the release, and it’s a glorious arrangement in pure simplicity. It explores the short and clear tones of the percussion instruments – harpsichord, marimba, and hammered dulcimer – then drifts into a high-pitched sea of long tones from the cello, violin and flute, finally proceedinto into a sprightly finale where all instruments are combined in passages of varying length and tempi (the composition is in fact an assembled mosaic of short pieces). This is music of such declared honesty and transparency that it’s the exact opposite of the way the world currently conducts itself (think of corporate finance dealings, or the utterances of any politician, in whose mouth the word “transparency” has a slippery meaning at best). It’s as though the composition is laying itself bare in schematic form as you listen to it, like a radio set inviting you to put it together. Somehow, Dan Joseph also finds room to accommodate memorable mini-melodies, and even some stripped-down baroque ornamentation. Imagine a grand Victorian ornate wardrobe being squeezed into a modern New York apartment. And what a great idea to incorporate the beauty of the hammered dulcimer, especially without a hint of parody or condescension (as Henry Flynt might have done). Joseph frankly owns that he has an interest in these purely formal explorations of tonalisation, even to the extent of thinking hard what that word really means and its other applications, but there is also a spiritual dimension to this music, concerning speculations on what happens after death and involving a personal memory of a friend that gives added poignancy and honesty to the work. Total recommendation for this music to the legions of Morton Feldman and Steve Reich fans, although this’ll also bang your gong if you’re into the music of those who have been intrigued by the possibility of minimalism-meets-gamelan, such as Philip Corner or Evan Ziporyn. Also here, the 2002 ‘Wind Patterns’, a lovely duo between Joseph’s heavenly hammered dulcimer and the flute of Leah Paul; and ‘Music Primer’, where baritone singer Thomas Buckner joins Joseph to recite the texts of Lou Harrison in his unique song-speech manner. In all, a fine collection of precision, clarity, and beauty.