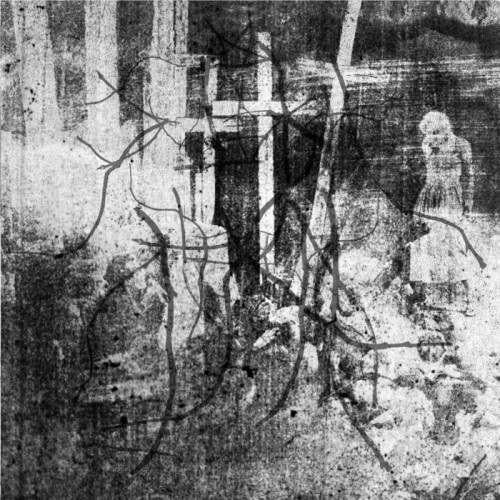 A fairly new band to my ears and already notching up Album No 2 with Larvae, the excellently named Sutekh Hexen is a duo based in the San Francisco metropolitan area that plays a formidable black metal / noise mixture. One of Sutekh Hexen’s members has already made an appearance in The Sound Projector, Kevin Gan Yuen, who together with Demian Johnston had an album Keep Your Hands reviewed here by Yours Truly. I note also that Larvae was mastered by James Plotkin, he who has been an eminence grise on so many people’s albums over the years yet has rarely been acknowledged in reviews of those recordings both here at TSP and elsewhere around the world. We do live in a very small world indeed!

Larvae is a short album consisting of just three tracks, all quite good in their ways, and which arguably could have been better if the production hadn’t been deliberately made lo-fi crappy so that everything comes out sounding really blunted around the edges. This kind of music perks up best when the recording is made to sound fairly sharp but not too much so. At least the tracks are varied in style and sound. Intro track “Isvar Savasana” begins quietly, moodily and gently, segueing into an acoustic guitar passage amid a background of wet-waving leaves and insect noises before suddenly blasting into a grim blackmetal storm of thundering guitar and a spray of ghost-voice wails. There is drumming but it’s so blunt that it comes over as an insistent thudding noise deep in the mix. The noise withdraws into itself for a short breather before summoning its rage again and spewing forth new bile with ghost vocals trapped in another dimension as it were yet still audible and guitars madly racing all over the cosmos.

“Lead Us in Warfare” is a short martial piece of crunching guitar, squalls of white noise spray, screaming alien ghost voices, a deranged marching rhythm and malevolent black atmospheres. For a short track, this is probably the best piece on the album: it’s definitely the scariest, the most industrial, the blackest and it’s demented and sinister to boot. Honest, find this music somewhere…the CD is limited to 500 copies and the LP version has apparently sold out already.

“La Det Bli Lys” (Norwegian for “Let there be light”) is the longest of the three tracks: it eases itself into your company gently, almost shyly, with a spoken-voice monologue, a sweet gentle acoustic guitar melody, a clip-clop metal rhythm and those incessant whispering voices that might drive anyone wild and incite him (maybe her) to an axe-murdering spree. Near the 10-minute mark the music suddenly sparks itself to an animated build-up that bursts into a storm of buzzing black metal fury that turns into a steady chug which continues to the end.

I wish the second track had been longer and made the album more substantial in scope; for what it is, the whole CD does seem rather short. A better production could have revealed not only more rawness in the music but could also have discovered the music’s potential to be more sculptured and three-dimensional in sound, and possibly even a potential for epic majesty had the musicians so wished to travel in that direction. As it is, the album signals there’s much in Sutekh Hexen we haven’t yet heard.