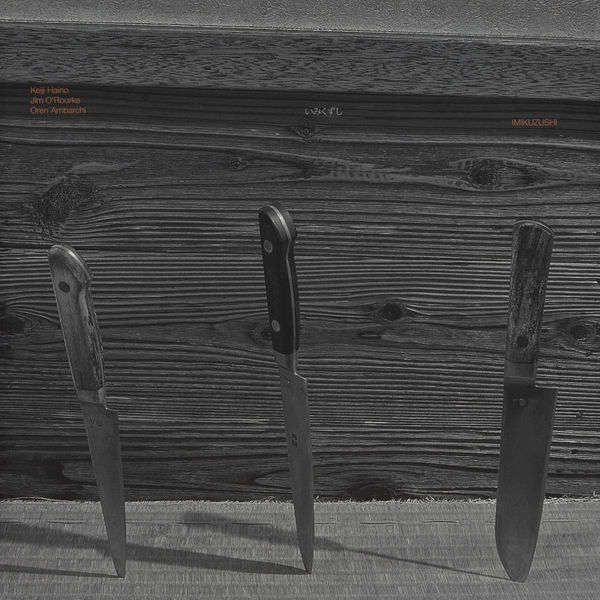 Starting in 2010, Keiji Haino, Jim O’Rourke and Oren Ambarchi have been meeting and playing live annually and documenting their results in Tima Formosa (2010) and In A Flash Everything Comes Together As One There Is No Need For A Subject (2011) with the music on each album played in a different style. For this third meeting, the trio have opted to play as a power rock trio with Haino on vocals and lead guitar, O’Rourke on bass and Ambarchi on drums. Thing though, with Haino on lead guitar anyway, the power rock trio turns out to be anything but just a rock trio … noooo, it becomes super-charged Japanese dark psychedelic / free improv guitar power rock … no, it is more than that …. it is FUSHITSUSHA REBORN!!! – but in a 2011 reincarnation with O’Rourke and Ambarchi doing all they can to keep the God Emperor of Japanese Psych-Rock in their sights, playing solid meaty bass and drums support, while Haino lets fly his untamed demons from his six-stringed weapons of mass destruction. On four very long tracks with equally long and mind-boggling titles, Haino leads his acolytes through sheer sonic guitar violence, black and austere otherworldly space and screaming vocals wailing existential pain.

Track 1 – I shall not try to pronounce the track titles – is an insane erupting volcano of gushing guitar lava, pushed forward by Ambarchi’s energetic percussion and O’Rourke’s no-nonsense straight bass. It just keeps going and going and for once I believe and hope that Haino will lose control over the track and just let it flood over him and the others instead of his trying to channel it in the way he likes … there is a great deal of tension in the chaotic storms that keep streaming from his fingers and all of a sudden the whole track just cuts out … Track 2 begins with still, almost inaudible voice and tightly compressed instrumentation but the music (almost) has a mind of its own and it charges forth at a steady grooving pace, Ambarchi subtly changing the beat and rhythm as he plays and O’Rourke following closely as he does so, while Haino rips out one deranged guitar chord series after another. It’s easy just to follow Haino as he flies away on his particular path but the real glory of the track is in Ambarchi and O’Rourke’s support and how they manage to assert their musicianship even though they have to trail the Dark Master closely.

Track 3 has a beautiful full-bodied, slightly bluesy sound – it might be O’Rourke playing that gorgeous resonant melody with its slightly off-key tones – while Ambarchi goes whisper-quiet on the cymbals and drum whisks and Haino’s guitar produces lightning shrieks. Come the 7th minute and Haino incredibly produces a rich tapestry of sparkling guitar tones almost organ-like in sound and majesty. The track starts on a constant rocking pace, Haino’s guitar stuttering all the while and spitting out fire, O’Rourke changing key and moulding the riff into something meaty. While Haino’s guitar goes pyrotechnic, O’Rourke and Ambarchi grab centre stage and go for broke noodling around on various little melodies that meld together over steady drumming.

The final track seems a superfluous footnote to the previous pieces – it somehow feels nowhere as refined or intense as the others and comes across as an excuse to have fun and just let fly. Haino revels in deranged guitar debauchery and the other guys simply support him, looking the other way as it were as he releases his particular Pandora’s box of indescribable monsters from between the strings. All of a sudden the track quietens down to allow Haino to muse on the nature of existence in a deep dark and severe ambience.

While this lasts and until the trio’s next meeting, I’ll treasure this truly intense opus of neural rearrangement and destruction. Given their pedigrees both together and separately, these musicians are apt to go another musical extreme the next time they play.