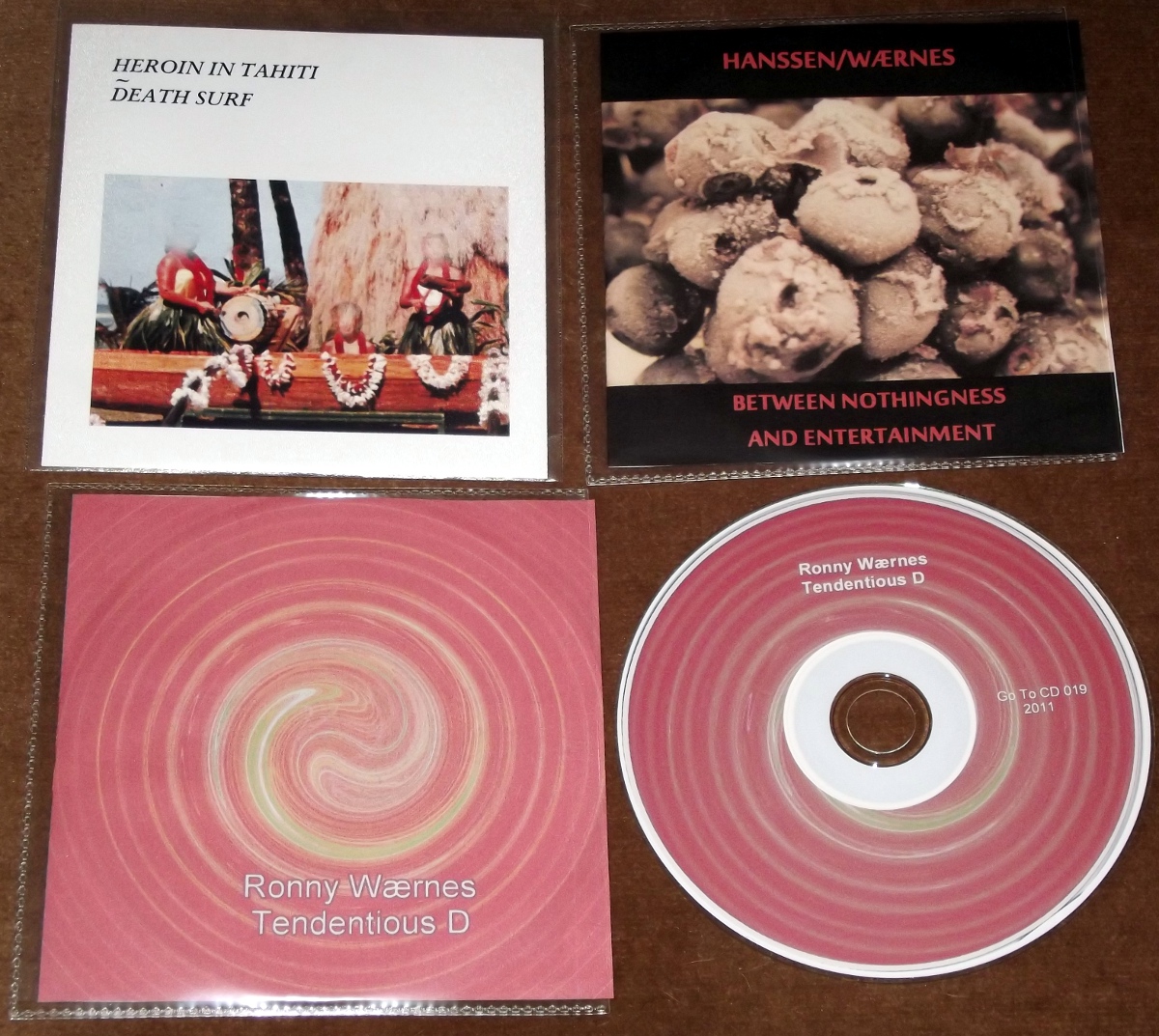 Ronny Wærnes is the Norwegian sound-art semi-industrial noise-guy who just won’t quit…got a couple of CDRs from him in December 2011. Tendentious D (GO TO GATE RECORDS GO TO CD 019) is a collection of eight eerie pulsating electronic drones, wobblers, squealers and whoopers, each more inexplicable than the last. He put these eight together for the RPM Challenge last year, a no-prize event which is intended to motivate musicians by offering them a small audience, a web stream and a guaranteed listen from someone with a pair of ears, which in this over-crowded world of music-making where there seem to be more records than people to listen, is not a bad prospect. The only catch is you have to complete your work in just one month to qualify for the RPM event. While there’s not much content on Tendentious D that’s so novel it’s going to amaze your leathery hide and make it turn inside-out, Ronny creates some quietly compelling non-musical chunterings and ambient-tinted bleatings, and it’s impressive he did it all just by processing sounds through a contact microphone, effects pedals and a mixing desk.

For Between Nothingness and Entertainment (GO TO GATE RECORDS GO TO CD 021), Ronny teamed up with the guitarist Kjetil Hanssen from Oslo who also has a radio show, his own record label, and plays with a large number of bands and “projects”. This is a good old-fashioned blast of no-nonsense noise music, realised in the studio with guitar and electronics and powerful amplifiers that must have sat there for hours taking all the abuse poured into them like long-suffering partners in a hopeless relationship. It’s got all the airless qualities that make noise music seem, to civilians and infidels, like so much air pollution belched into the clean air like factory chimneys. Though its creators speak of a “massive wave of energy”, it’s not really that energised, and I kind of like the fact that these tracks aren’t especially relentless or propelled by the usual power-house pump-action wheel motions that characterise a lot of evil power noise muck. Instead, Wærnes and Hanssen just pour out generous globules of tasty textured drone-noise action as efficiently as if they were pulling deep-sea fish out of a hole cut in the ice. Wisely, they never look up from their work or pay attention to any distractions, and just keep reeling in the fish.

Here’s another vinyl LP from Boring Machines in Italy. Heroin In Tahiti‘s Death Surf (BM036LP) was realised by the duo of Mattioli and De Figuereido using guitars, synths and drum machines, between them creating a very appealing and agitated, churning surface which somehow blends surf music, garage bands, and exploitation movie soundtrack music with the alienating forces of “cold wave” music. Plenty of distortion pedals, reverb and echo, aimless twanging, and endless drum machine rhythms ploughing across imaginary fields of urban desolation. These musical layers melt together as surely as if the Italians were blasting five wax figurines with a blowtorch. The synth effects aren’t used as tasteful watercolour washes, but more like the impasto layers of a painter like Frank Auerbach, and the rest of the music has to sink or swim in these thick tides of grisly electronic gloop. At worst, the excessive reverb here can tend to disguise the fact that some of these instrumentals aren’t much more than sluggish 12-bar blues or rockabilly jams, but at their best Heroin In Tahiti can do more than hint at the vivid semi-apocalyptic landscapes they are clutching at. I’m intrigued to learn that both players live in a neglected area of east Rome, where the fabric of the city is falling down around them and a local scene called “Borgata Boredom” appears to have formed itself, no doubt a vehicle or framework for unemployed youngsters to find a mode of creative expression for their angst, or just sit around in cafes and whine about the situation. I can’t quite find the Morricone resonances in this music which they allude to in the press release, but the cinematic aspirations of this pair are more than met simply by living in that seedy part of Rome which has been captured by the unflinching cameras of Pasolini, De Sica and Visconti.