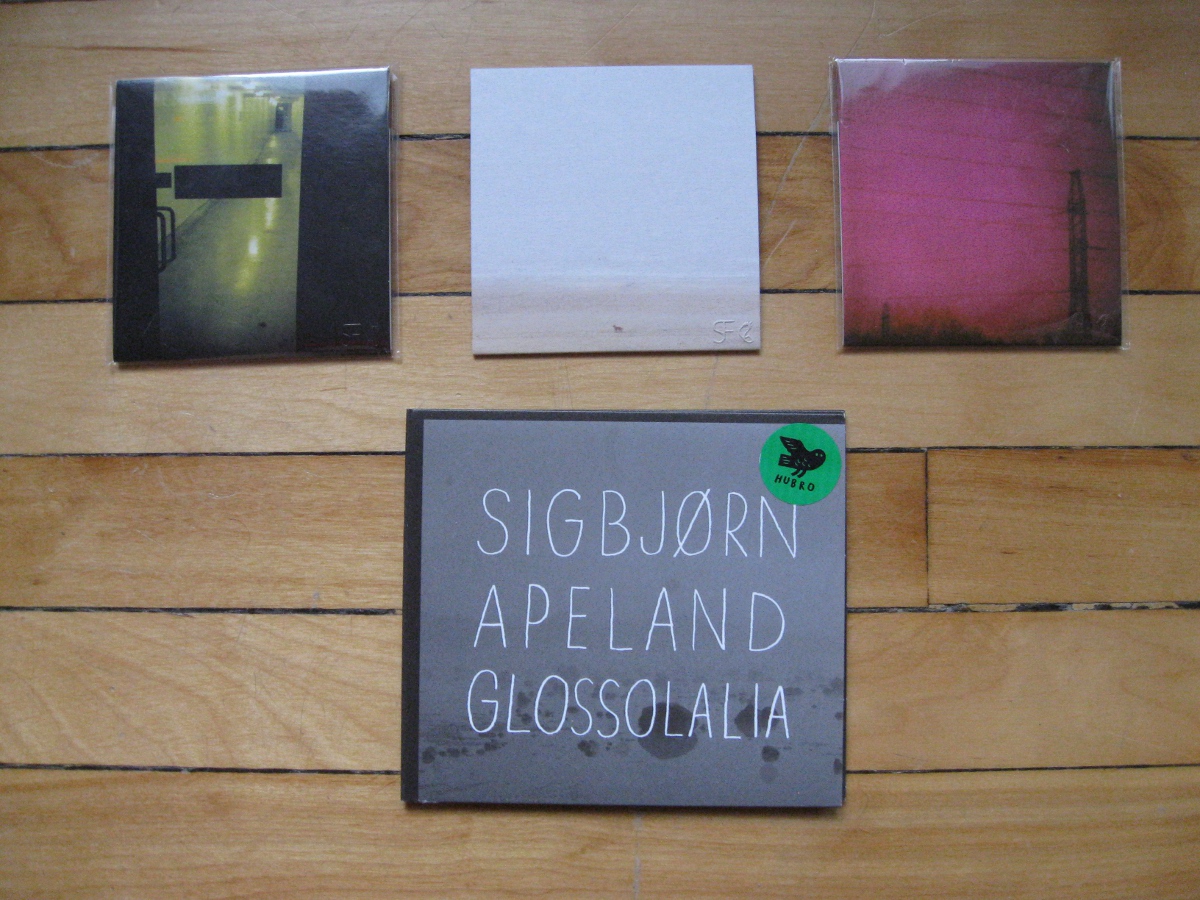 Glossolalia (HUBRO CD2503) is harmonium player Sigbjørn Apeland‘s debut solo album, recorded for the relatively young Hubro imprint. It is a sombre, droning affair that hones in rather intimately on the harmonium, allowing ample airtime to the various incidental creaks and cranks that accompany playing any instrument that is in a state of disrepair. Instead of bringing the listener out of the experience, however, the imperfections lend the recordings a sense of honesty; this feels like an album that was recorded in a room with hardwood floors, with Apeland and the harmonium sharing the space alone. Compositionally, the tracks highlight the gentle, almost insidious nature of the instrument, with the tones often feebly aligning into chords; it’s only the deep low notes that convey any real sense of power, giving certain moments a considerably more meaty feel than others. This fluctuating pattern produce a record that ebbs and flows in terms of intensity; coupled with the innate sound of the harmonium, the album takes on a distinctly nautical sound. Tuneful yet freely flowing, Glossolalia reflects true affection for an instrument Apeland has been playing his whole life.

Elsewhere, we have three diminutive three-inch CDRs from Toronto’s Standard Form label as part of their miniature “Rural Route” series. Alex Durlak‘s Catalyst (STANDARD FORM 3″ CDR SFRR004) is the product of a particularly, and it finds Durlak processing his droning guitar work “in real time using a series of granular synthesis patches to create densely layered and dark sounds not easily associated with their original source.” Of course I hadn’t the slightest idea what ‘granular synthesis’ was until I prowled the web for details — and I think now I’m even more in the dark — but the sum result is a fairly expansive, 20-minute cloud of sound that fluctuates between resonant hum and shards of choppy, distorted guitar. I would place this at the meeting point between industrial, improv, and ‘drone’ music, in that it’s ambient in a dreamy, whirly sort of way, yet piercing in a sense that you could see this having a black and grey cover and having come out on Mute or Some Bizzare in the 80s. And it then throws in things like “granular synthesis patches” to give it that academic improv edge.

Machinefabriek‘s Halfslaap (STANDARD FORM 3″ CDR SFRR006) is touted as “a score for the strange sensation of heavy limbs as sleep slowly washes over” (sorry, I love these descriptions the label has printed on the Rural Route series), and it is just that — a faint, bucolic lullaby of sorts that sounds something like a glockenspiel on benzodiazepines, its attack and decay characteristics all distorted. The formula is a perfect one for the seventeen minutes allotted here (this isn’t quite the Disintegration Loops), and one really does appreciate the somnolent quality of the sound. As the dreary chimes go by, they begin to stutter and lag, much like eyelids fighting in vain against a pressing tide of drowsiness. This music is both pretty and well-poised to put you to sleep — two characteristics that could easily be damning — but veteran soundsmith Machinefabriek wears it well on Halfslaap.

The most tuneful effort of the bunch, the Gentleman Losers‘ self-titled disc (STANDARD FORM 3″ CDR SFRR005) is a triptych through Europe constructed out of electric guitar, bass, and keyboards. It is dreary, free-flowing and intended to evoke particular images and themes, with a distinct Americana influence. For example, ten minute “All That Is Solid Melts Into Air” uses dreary synth tones and mournful pedal steel to produce something distinctly wistful; beneath the instrumentation is a disembodied field recording that ups the ethereal quotient. The two shorter, supporting tracks don’t deviate much from the established plan, doling out abstract melancholy in potent dosage. Yes, these folks take themselves a little too seriously (it’s hard to forgive a title like “At Dawn I Am The Morning Clouds, At Even The Falling Rain” — even the capitalization reeks of self-importance), and, yes, they’ve chosen to name themselves the Gentleman Losers and play sad, lonely music. Regardless, their delivery is evocative and mysterious enough to deflect most criticism.