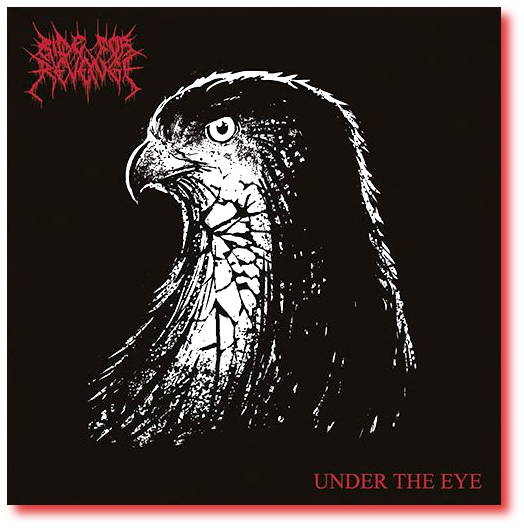 Finnish act Ride for Revenge traffic in a filthy-sounding, slurpy, encrusted form of black metal that happens to assimilate whatever bits and pieces of other music genres that take RfR’s fancy and Under the Eye demonstrates this cosmopolitan side very well: the opening track alone is an all-electronic message from aliens from a far galaxy warning of what’s gonna hit us if we don’t pay heed. Pay heed or not, we get hit anyway with hard-hitting reptilian BM complete with throaty monster vocals, some slimed over with reverb, of the sort only an ectothermic herpetologist could love. The music probably owes as much to death metal as it does to black metal. Drums stutter and machine effects hover about and hoover up resisting mortals to digest and spit out in the form of dried husks. In parts this music is reminiscent of Rigor Sardonicus though it’s not quite as barmy as those moss-embalmed Americans who to date have not given away the secret of their batty cymbal.

Most tracks are very short and if you sneeze, you’re liable to miss them. “Prevail in Hell” is an early highlight with martial drums, a scratchy lead guitar and a groovy rhythm that develops later in the track. The music flows surprisingly well and the more I hear this album, the more I detect a smooth groovy quality that gets my head nodding and swaying, strange though that seems. Special mention must be made of “The Endless Flood” for a latter section in which the band tortures a horrible space monster.

The second half of the album improves on the first half: “Through” has a deep spoken vocal reminiscent of Sisters of Mercy and a dark melody performed on what sounds a bit like organ in the background; the instrumental “Conversation in Death” is a tango of noisy crunch guitar and repetitive drum loops; “From Darkness We Ride” has gloopy quacking effects (like Donald Duck trying to breathe underwater) that make the song even more deranged than the usual RfR song; and “The Hawk Appears” features a tribal drumming rhythm combined with twanging percussion that gives the track an exotic Oriental feel. The outro title track starts off with an industrial noise loop that lapses into a loping song with the odd spasm of rapid-fire synth drumming and reverbed monster vocal.

In all, this album is a varied one that throws in a number of unusual sound effects and influences and reveals RfR as more than just another eccentric Finnish black metal bunch. Spacey ambient effects can be very subtle and easily missed yet they lift the music to another level just by their presence in the background. It’s a shame that most songs are quite short and very fixated on rhythms; if RfR could let the music soar far into the firmament, they’d end up with something really incredible and no less deranged than what they already do.