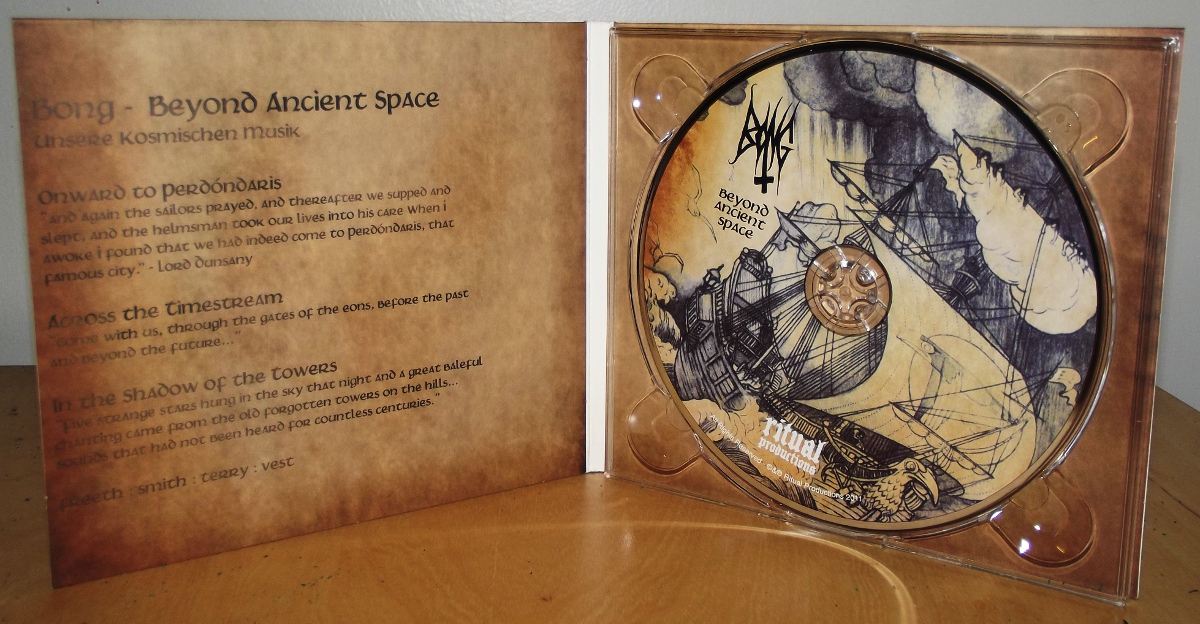 No doubt about it, this is one seriously stoned-out doomy drone band blasting out its own monstrously grinding clarion call to the opiate-swigging, pentagram-wearing (or tattooed if they’re really devout) followers of Baphomet out there. The Bongsters set their guitar engines for a journey into the darkest reaches of the inner cosmos and go in search of the Point of Singularity where the Big Bong Bloke himself must reside. Highly rhythmic and immersive, slow and at times arduous – some effort into self-enlightenment is required! – the moaning, groaning guitars are enriched by bewitching sitar melodies that thread their way around the rough-edged drones.

Admittedly the journey is very long and in the middle track “Across the Timestream”, the music grows darker as if riddled with self-doubt and faltering confidence about the nature of the journey – are we on the right track? how do we know when we come into communion with BBB? what if we’re being led astray? – and as if in response to our despairing thoughts, percussion begins to bang hard as if to say, “Come ON, folks! Chin up, keep your minds on the main game!” while lead guitar tracks out the path to follow and the whirling drone follows in its wake.

“In the Shadow of the Towers”, in some ways a continuation of the previous track musically and non-musically, is even more arduous (and very repetitive as well) and darker still. Drums dominate this track and the effect is to make the journey seem a lot harder than it should. Guitar gradually makes its presence felt as though to inspire us laggards.

A destination is reached but whether it’s the real deal or a temporary stop is one for the listener to decide. The album starts out well but runs out of puff as if Bong quickly get stuck in a particular groove and no matter how much the musicians try to get out of it, it has a quicksand effect: the more you struggle, the deeper you sink. That wonderful sitar featured in the first track disappears from the rest of the album and that was a major disappointment for me. I’d have liked something more challenging in this music rather than mere droning; even Earth and Sunn (the bands) realised there’s only so much you can do with the drone, beautiful and mind-expanding though it can be. Music such as this requires more thought about structure, how the listener’s experience of it could be hugely different from the musician’s experience and how to incorporate that awareness of the difference into the concept.