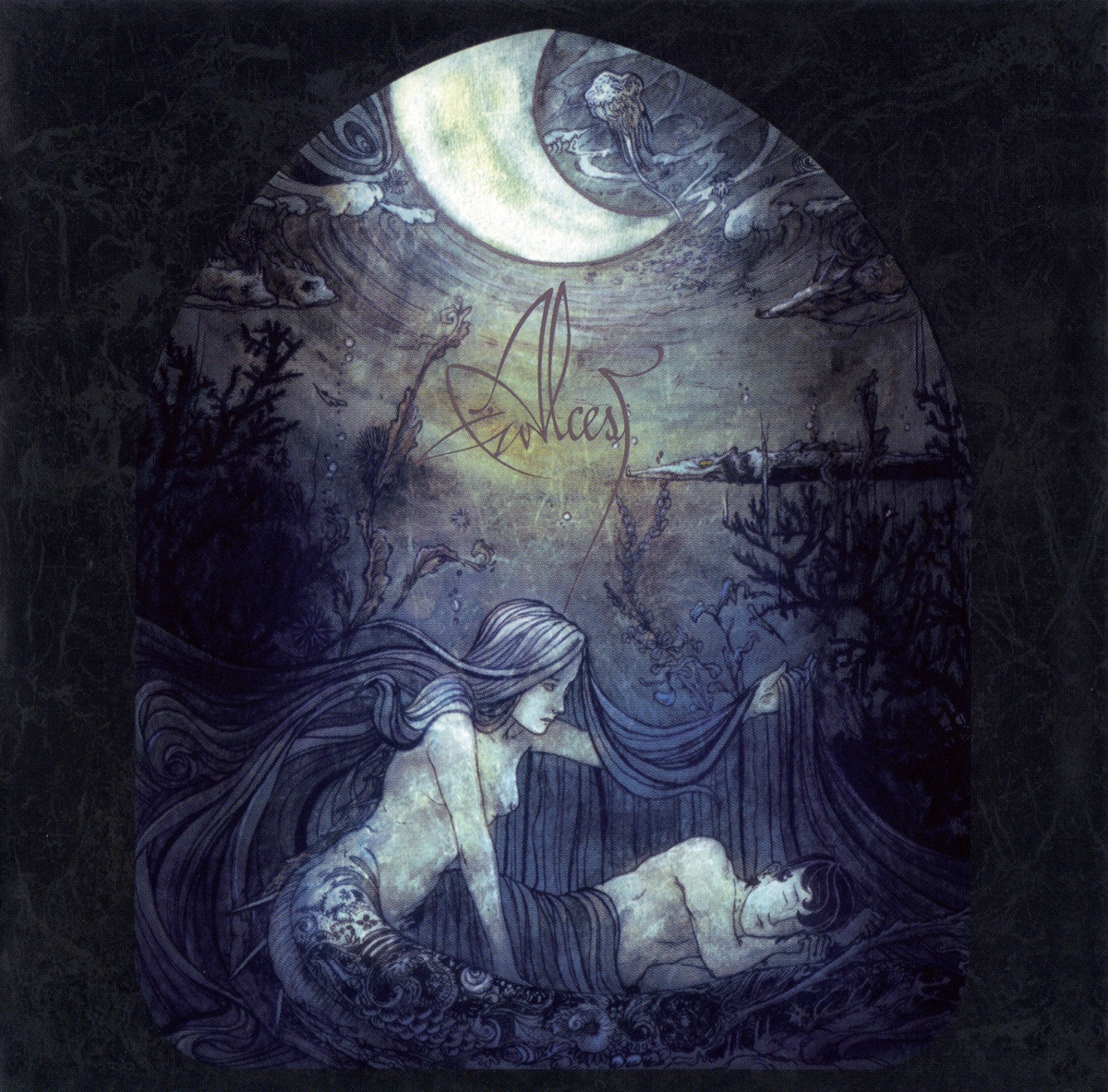 Bands like Alcest sure do like to mock the arbitrary boundaries separating black metal and softer, melody-based forms of what was once was called indie shoegazer pop. One can combine harsh music like BM, noise or industrial with melodic and sonically smooth song-based structures and elements to create accessible and highly expressive music in which the darkest and the brightest emotions such as joy and despair co-exist easily. Alcest achieves this fusion of dark and light genres on Ecailles de Lune; the music expresses melancholy, longing, grace and hope as well as anger and urgency in ways that are beautiful, elegant and spacious. The sound is usually clear and liquid, even when the BM guitar textures are at their grimmest and most abrasive. Though harsh and soft musical elements might be expected to create tension and a sense of unease and foreboding, here they produce a sense of wholeness which may not necessarily be reflected in the lyrics. Indeed the danger here is that sometimes the music is a bit too smooth and happy and lacking in the spark that a rougher and sharper approach in the music’s recording might give.

The two tracks that make up the parts to “Ecailles de Lune” run the gamut from pensive and sombre to hope and longing to be at one with nature in mood. Acoustic, melodic guitar melodies touched with reverb can be dark, jangly and dreamy, and put the listener in a slightly mesmeric mood. Batteries of BM guitar riffs that smack the ears after episodes of sparkling dreaminess seem ill-advised but the impact and contrast in sound in texture between the acoustic and BM elements aren’t great. There are folk influences in some of the guitar-playing which smooth over any differences and awkward juxtapositions. The vocals vary a great deal from smooth and contemplative clean-toned singing and murmuring to throaty BM-styled screeching.

The rest of the album sounds like a footnote to the “Ecailles …” parts even though it carries the bulk of the album’s theme. Listeners may think they’ve stumbled into well-worn Burzumesque melody territory with “Percees de Lumieres” with the poppy melody and steady drum-beats – but then the song detours into darkly moody and meandering paths of stuttering guitar sparkle. “Abysses” is a welcome if brief and undeveloped venture into alien deep-space ambience. The last two tracks form a complementary pair: “Solar Song” sounds an easy-listening celebratory piece but it seems drained of energy; and outro track “Sur l’Ocean Couleur de Fer” is its dark twin, sorrowful and wistful in mood and style as the alternative universe shuts up shop and recedes away from the listener.

Alcest man Neige has poured love and care into crafting this album – and beautifully made it is too, the songs following a narrative which is reflected in the album’s whimsical cover art, seen through a portal. The entire work though is missing a distinctive flavour, a zest that would give it real life and individuality and lift it into a realm of greatness. The theme is a well-worn one: going on an internal or mystical journey in a different dimension and ending up abandoned or alone. Something is needed to freshen it and make the alternative universe in the ocean appear as if visited for the very first time. Perhaps if Neige had used more folk music elements and drawn on French folk cultures connected with fishing or the sea for inspiration, the music would have real zing. For an album that has melancholy a-plenty, Ecailles de Lune is not exactly brimming with the kind of existential angst or repressed violence that might at any moment explode and lift the album to a higher level of sonic expression.

My feeling is that with BM shoegazer pop, something a bit off-kilter, some slight eccentricity perhaps, is needed. With all due respect for Neige, who’s probably sweated more than a few buckets over his Alcest project, I don’t think it’s enough that the music is technically perfect and beautiful: it must have something that actually makes it a bit less than perfect. Otherwise over time, the music will lose its spark and end up stale, dated and generic.