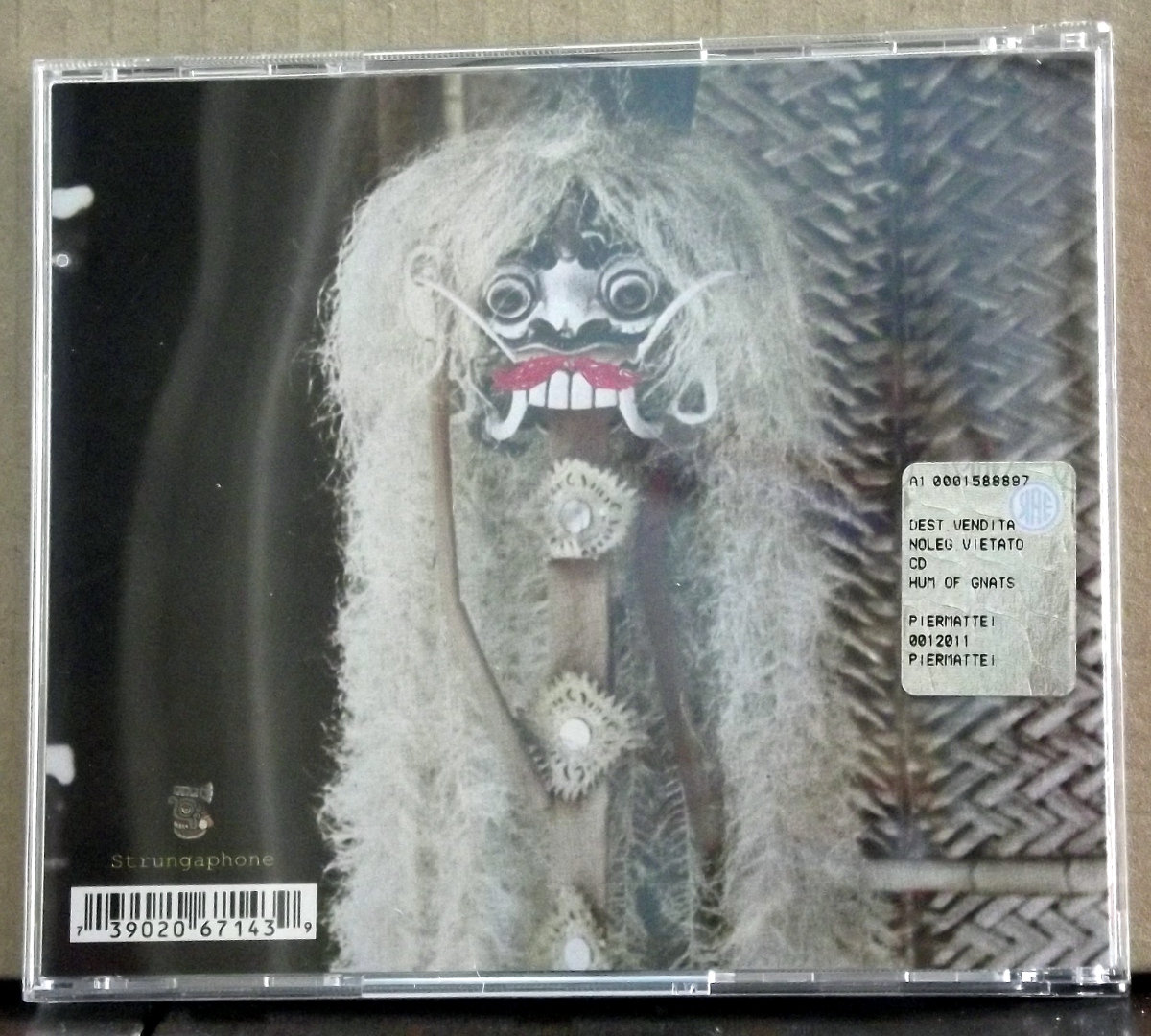 Purge the Weevil from Yer Midst by Hum Of Gnats (STRUNGAPHONE SPR01) is one of two gloriously impossible and wonderful records sent to me in December 2011 by Ezio Piermattei from Pescara in Italy. I hope to extend my writing keyboard in the direction of the second one in due course. Today I hold and I spin a four-track concoction put together by Ezio overdubbing a large number of instruments – piano, viola, percussion, clarinet, accordion, guitar, recorder, voice and more – editing and layering the results according to instinctive and unpredictable compositional schemes, to create utterly unique and compelling works, each around 10-11 minutes in length, and leaving me grasping at straws as I try to convey something useful about them. Napo Camassa contributes his soprano sax to ‘Hop Score’, which is a bewildering collage of modernist composition. String sections, loops, errant percussion, and many other short instrumental passages build up a strange nebulous density that is opaque and hard to fathom. It changes radically, passing through at least five or six different “movements”, with each development completely unexpected, and yet the work hangs together perfectly in its own eccentric manner. Not quite jazz, not quite improvisation, and certainly far too loopy to qualify as any form of academically-trained composition.

One already senses that Piermattei is a self-taught maverick with ideas so potent that only he can express them, notwithstanding the contribution of Napo Camassa. I click forward to ‘Hex-Exercises in Stalinism’ to endure a shape-shifting bed of rattling china plates for percussion, on top of which eerie unnatural horn or electronic voices make their plaintive moan. Again, we have the sense of a framework that is barely hanging together, a fragile sculpture or mobile built of spindly wire which is somehow defying gravity as it spins and rotates its beautiful colours and planes in mid-air. In the time it’s taken to write that sentence we’ve already shifted into a halting acoustic guitar tape-loop that stutters and clops, having emerged from the warp of a Terry Riley-styled organ figure. Now come half-hearted ghostly voices whispering what might be two stanzas from a lost 1960s pop song about lost romance. There’s also ‘Hey, Rube!’ which applies tape delay to scattered woodwind notes, combined with a bass guitar that has clearly wandered into the wrong building, a spooky cheap organ drone, and other foreign effects. Five minutes later we hear a sneering pop singer chanting from behind a distorting sheet of glass, then fragments of atonal free playing electric-guitar mayhem. Scattered liberally with precious moments of heavy-duty psychotic weirdness within beguiling open-ended structures, this record is just too good to be true. Piermattei may be using his own personal version of the bricolage method (although frankly, I have no clear idea what he’s doing), but it’s done with imagination and skill, and he’s not simply another prankster with a sampling device and a computer. This record is a hand-made work of skewed mutant genius, its fragmentary nature in a direct line with such important records as The Faust Tapes. CD in jewel case is decorated with puzzling texts and collage images. You need this record!