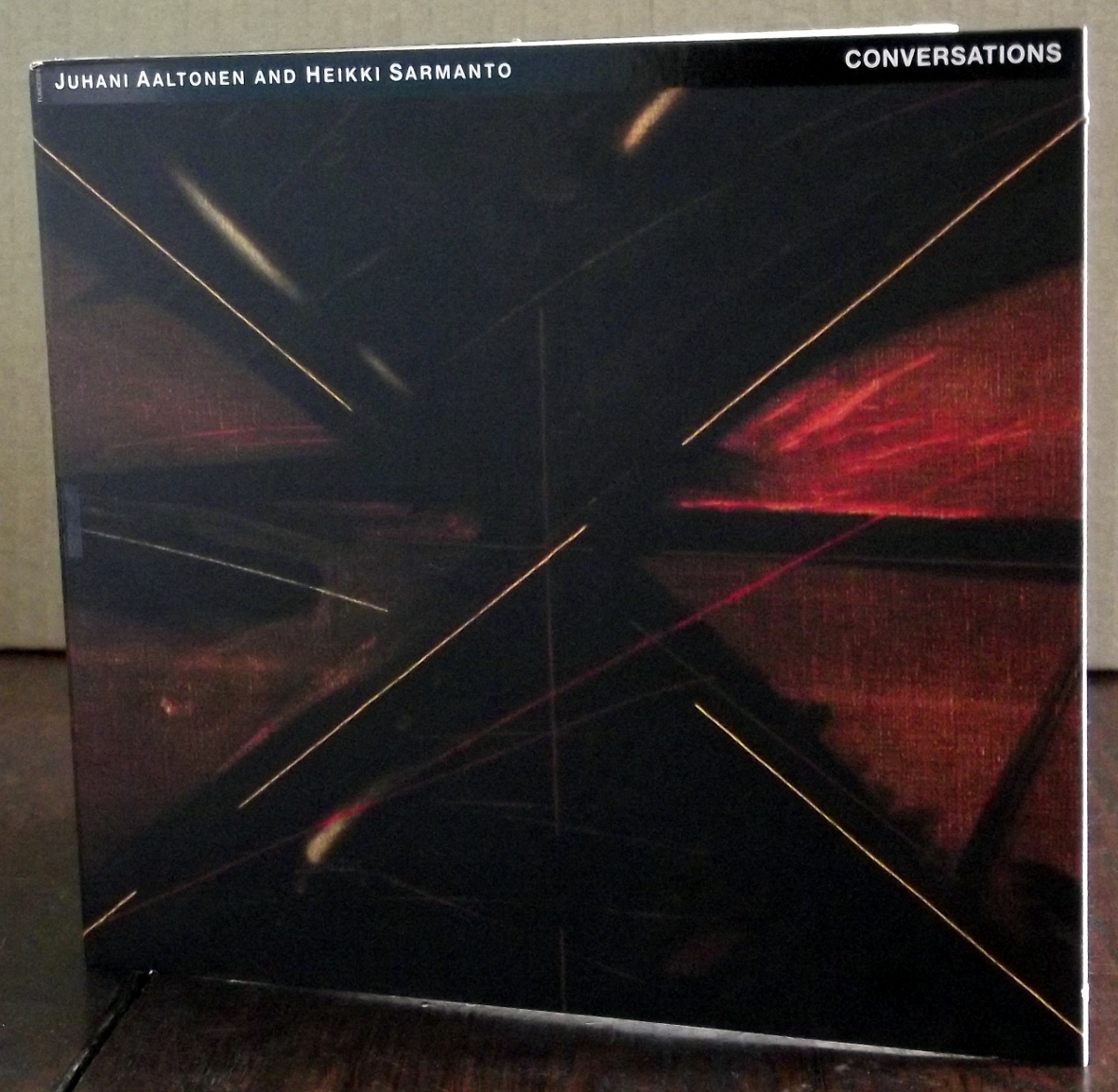 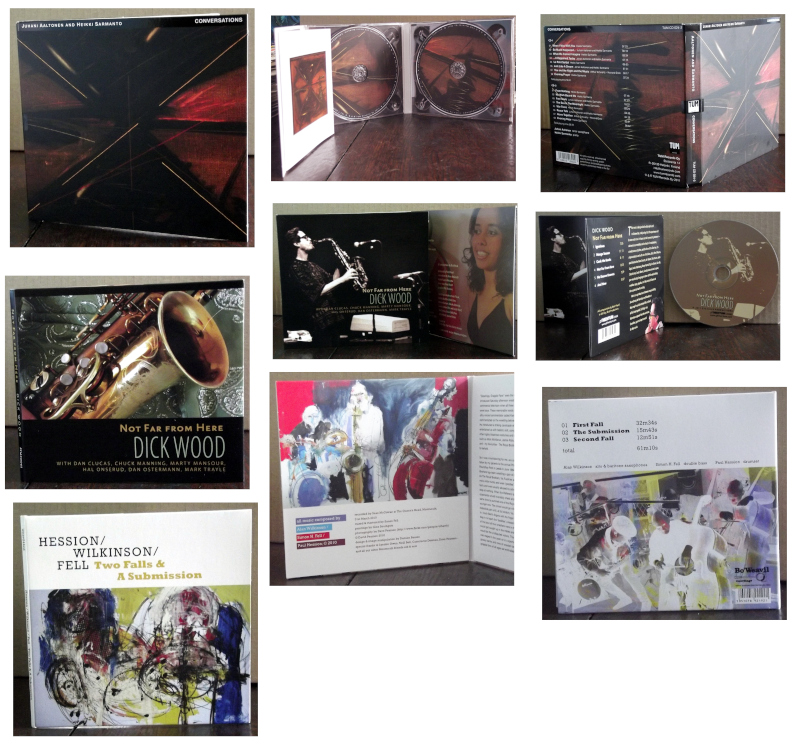 Arrived 20 December 2011, another envelope from the Helsinki jazz label TUM that impressed us quite favourably in January. Juhani Aaltonen and Heikki Sarmanto are two big names in the Finland jazz world and have been playing together since 1964. Conversations (TUM CD 024-2) is a two-disc set of saxophone and piano improvisations from this venerable duo, including some original compositions by the pianist Sarmanto and a couple of Schwartz-Dietz standards that ought to be familiar to anyone who ever heard a jazz record made after 1940. It’s flawless playing throughout, even if not especially innovative, and Aaltonen comes across like a slightly mellower version of Trane when he was in an introverted, meditative frame of mind. Sarmanto is a melodic genius, and he’s quietly working overtime to add no end of melodic flourishes and glissandoes on his keyboard with modest grace and expertise. You can tell he’s an arranger; he seems to be sketching out scores for a full orchestra as he plays the keys. The cover painting is suitably autumnal with colours that match the wistful and burnished mood of much of the music, and was executed by the Finnish abstract painter Juhana Blomstedt.

From 16 December last year, we received Not Far From Here (PFMENTUM CD065), a set of impressive jazz-based improvisations by the Los Angeles musician Dick Wood, who composed and led the sessions as well as playing the flute and alto. He’s built a strong small combo with the cornet player Dan Clucas, the trombonist Dan Ostermann who sometimes adds a “space mute” to his trombone, the drummer Marty Mansour, bassist Hal Onserud who joined by way of Cecil Taylor, tenorman Chuck Manning, plus live electronics from Mark Trayle. Together, these energised and expert players harness mucho free jazz energy while also managing to negotiate all the wild twists and turns of Wood’s freaky, pretzel-shaped compositions; some startling dynamics on offer throughout all six tracks, showcasing instruments in highly imaginative and unconventional ways, all of which makes for a very satisfying listen. More often than not with this set I bethought me of a 21st-century update on Art Ensemble of Chicago with the added hookery-pamookery of digital whoops from the Supercollider electronics section, but it seems Wood has a very large range of musical ambitions in mind which feed into his elaborate mind-circuits, not all of them from the jazz world either. Blues, avant-garde composition, and Zen philosophy are all strong forces which Wood intends to marshall in his private army. In fine, a glorious listening experience of jazzy brass toots, percussion, bowed and scraped bass sounds, and generally mutated loopiness managed with the sparing use of electronic treatments and breathy growling effects. I like the lively stop-start angularity of ‘Cook The Books’, but if in need of something more “out there” you might enjoy the electronics-heavy diablery of ‘No Known Knowns’, which samples the voice of US defense secretary Rumsfeld and combines it with the octokoto instrument (a hand-made modified zither) of Dan Clucas. In the semi-shady mystery world of this cut, the rhythm section manage to sound positively cynical and blasé at the same time with their ramshackle percussion and resigned bass sighs. The record also boasts an exciting, bright sound, for which we must give due credit to Scott Fraser, the technician who recorded it at Architecture in LA in just two separate sessions. The mangos are in!

The English trio of power-jazz players Hession Wilkinson and Fell opened many ears to what the English could really do with the free jazz mode, particularly in 1992 when Foom! Foom! was first released and even veteran jazz writer Byron Coley waxed lyrical at that time about the raw blastage coming from Alan Wilkinson’s bell. Now here they are again on 2010 date released as Two Falls & A Submission (BO’WEAVIL RECORDINGS WEAVIL44CD), and the passage of 18 years has done absolutely nothing to dim the fire nor crack the binding of these three, as the opening cut ‘First Fall’ bears witness – over 32 minutes of uninterrupted sustained jazz-improv energy which is as welcome as a roaring bonfire in the middle of a cold and damp May Day field. The album and track titles are derived from the metaphor devised by drummer Paul Hession, who sometimes likens the act of improvising to a wrestling match. By his reckoning, the trio of Hession Wilkinson and Fell have a “playful, grappling style”, and it’s this very physicality which asserts its unignorable presence on almost every minute of this disk…you can almost feel the three players interlocking their very bodies, if that isn’t too indelicate an image. There’s something about Hession’s drum rolls in particular that seem to suggest acrobatic back-flips and rope-bounces aplenty as another body flattens against the canvas, but mostly it’s the way the rhythm section work together that creates an endless flow of forward-moving complex musical information, an express train packed with a delegation of University professors and toting 5,000 doctoral theses piled in the caboose. Meanwhile Wilkinson, switching between alto and baritone with the gusto of an Italian gourmet visiting the sweet trolley, exhibits a huge range of techniques – crazy overblowing shrieks, sad and mysterious basso-burbling, sonorous growls and grunts, and (mostly) endless streams of free-thinking diatribes flowing through his supple fingers at a speedy rate of knots. It’s pure streams of abstracted emotional wallop, set to a syncopated beat that makes every sinew in your body pop. In short, the album is a hip throw…from the hippest of the hip!