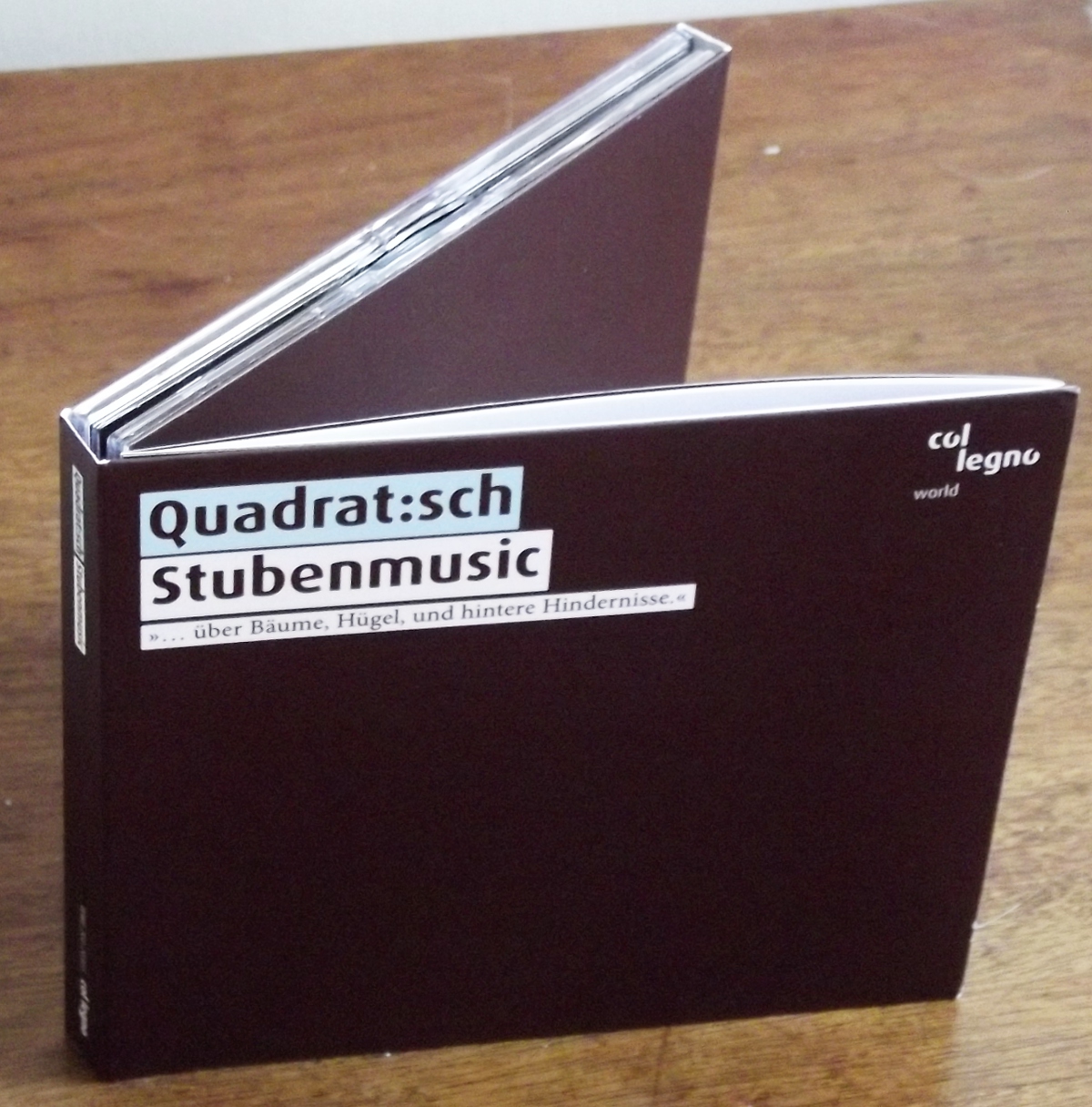 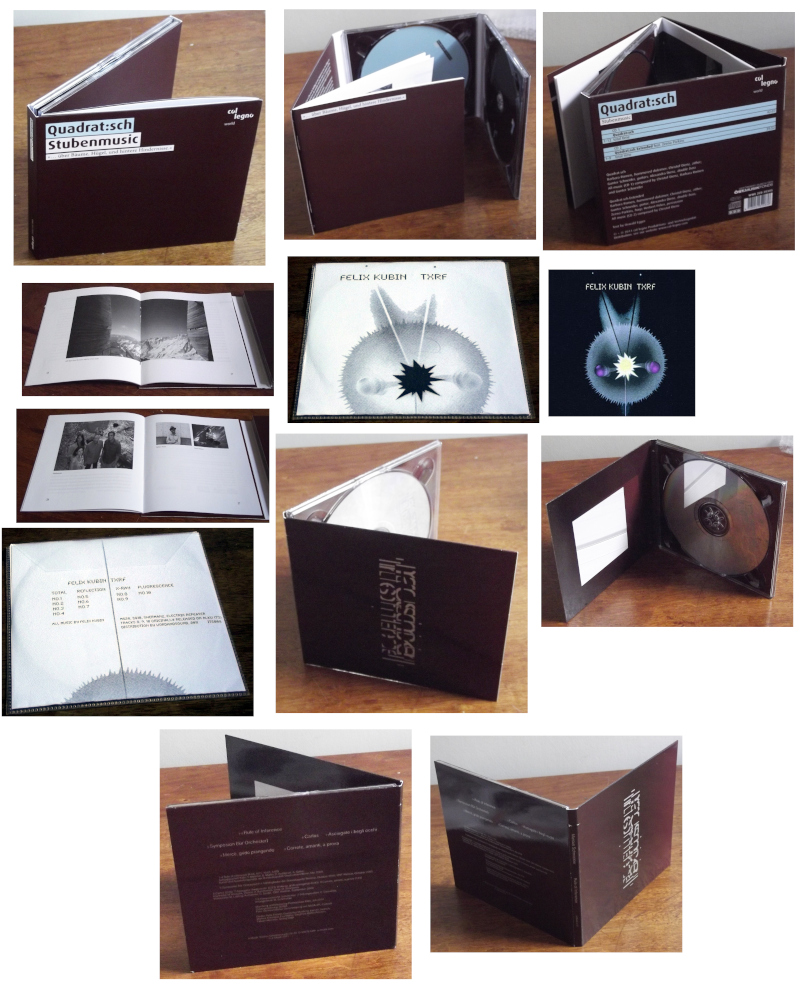 A Blanket In My Muesli

Here’s some unusual acoustic experimental music made by the German foursome of Quadrat:sch, deliberately emulating the traditional instrumentation of 18th century Alpine chamber folk with their set-up on Stubenmusic (COL LEGNO WWE 2CD 20305). Using hammered dulcimer, zither, guitar and double bass, the quartet turn in 12 short-to-medium pieces on the first CD of this double-disc set, all of them composed by the zither player Christof Dienz, and they are lively, taut renditions of pieces which follow song-like structures with their winning and bright melodies, complex time signatures, and brilliant inventive interplay of instruments. These tunes probably aren’t directly inspired by folk tunes as such, but some of them refer to dances, and the title of the opening track ‘This Way or That Way or the Other’ feels like a simple homespun philosophy that could easily apply to the gentler life of 200 years ago as much as it does to the strategies of a post-modernist musician. Apart from a couple of slow “pastoral” pieces, the mood of this disc is upbeat and cheerful, and you’ll soon be ordering a pair of britches and leather buskins so that you can join in this merry dance on the slopes of the Finsteraarhorn. On the second disc, the set-up is “extended” by the arrival of the great Zeena Parkins with her harp under one arm and a bushel of alpine fruits under the other. The percussionist Herbert Pirker also joins the team, and the six players use plucks, drones, groans, swoops, zangles and many other pleasing effects in very abstracted ways. These open-ended semi-atonal and non-rhythmic instrumentals (which are also composed rather than improvised) are intended to explore sonic structures, and while the set may not be a direct “answer record” to its more danceable brother, it is very indicative of the way that short, compressed compositions can be “opened out” into these labyrinthine buildings, full of twisting corridors and pathways. Oswald Egger supplies an interpretative text to this fine package of interesting music.

The Man with X-Ray Ears

The lovely Felix Kubin has released TXRF (IT’S ITS008) as a double LP, albeit not an excessively long one – some sides are just 11 minutes in length. It’s a fine set of irresistible and enjoyable electronic music made with such tools as the Sherman 2 filterbank and the Electrix Repeater, which is a loop sampler device – in short, a combination of analogue and digital devices to create patterns and processed sounds. As ever, Kubin manages to draw convincing lines of convergence between Kraftwerk, techno club music, and the more extreme modes of academic experimental electronic music of the 1960s, compacting his ingenious thniking in short and portable statements that remain somewhat enigmatic yet also very accessible. He also retains his very droll sense of humour, and I sense an undercurrent of hilarity which informs even the most austere of these cuts, which Kubin performs completely deadpan. According to the press release, of which I don’t have a physical copy, there’s also a scientific dimension to the set, involving the action of firing X-Rays at solid matter in order to determine something about their surface properties. This feels like a throwback to a certain time in the 1990s when Disinformation, John Duncan and others were exploring ways to make electronic music using scientific devices like particle colliders and shortwave signals. We’re not told exactly how Kubin managed to process X-rays into sound, and the plausibility factor is pretty low to say the least, but through the power of suggestion (a strategy also picked up by the cover image) it does pre-determine how we as listeners will approach the music to some degree. As a double LP, it’s structured in four connected sections titled ‘Total’, ‘Reflection’, ‘X-Ray’ and ‘Fluorescence’, suggestive of a process that might lead the listener through an experiment to its successful conclusion. In case any of this makes Kubin’s work sound pretentious, let me reassure you it’s quite the opposite; when you listen you’ll be won over instantly by the clarity of his thinking and the straightforward way he presents his ideas.

We Imply, He Infers

Another German composer is the excellent Marcus Schmickler, usually known for his extreme electronic music pieces. Rule Of Inference (A-MUSIK A-37) however showcases his compositional skills, with three substantial suites scored for percussion, orchestra, and chamber ensemble. The title piece is in four movements and allows the Cologne Schlagquartett to exercise their upper body muscles producing the strident, explosive portions of the first section, and the more approachable gamelan-like passages of the second part; we also hear bone-like rattling effects, brooding rumbles like thunder, and even some quasi-African polyrhythmic passages. Apparently all this percussion music was derived from complex ideas about logic, mathematics, and astronomy, and we’re advised to look for parallels in the music of Xenakis, Grisey and Stockhausen. It’s enough to restore your faith in systems-based music when it achieves such powerful results.

Quite different to the above is the 10-minute ‘Symposion’, an orchestral work which presents an eerie series of very mixed chords to create an effect like a slow-moving Ligeti or Penderecki piece. Though no stranger to micro-tonal compositional ideas, Schmickler here is in fact exploring something about the history of equal temperament, about which I know less than zero other than it’s a tuning system. ‘Symposion’ contains enough dissonances to curdle your internal organs, yet unlike Ligeti or Penderecki’s music it refuses any sort of narrative, religious, or philosophical associations and remains largely an exploratory, “process” experiment.

The album finishes with four short chamber-instrumentals which are intended as direct tributes to Carlo Gesualdo, the madrigal composer whose colourful life was about as bizarre as the music he composed; it seems Gesualdo broke all the rules in this very rarefied medium, but being the murderous nobleman he was, he could afford to do so and the audience for madrigal music was in any case incredibly limited (I like to think the Renaissance was a simpler more innocent time before globalisation, lucrative TV deals and instant internet coverage was the order of the day). One of the rules he broke was using far too many chromatic effects per square inch. Chromatics is another musicological term which I don’t really understand, but I’ve heard not a few records by Gesualdo and his scores make singers jump through hoops to produce musical clashes and dissonances that can jar the fillings loose from your teeth. Schmickler’s approach has been to eliminate the vocal elements completely and attempt, through his arrangements, to compress all those delicious chromatics into handy bite-size pieces. I’m no expert as I hope I’ve made clear, but I feel Schmickler has somehow missed the exquisite jarring factor that is to me the essence of Gesualdo. Even so, these four succeed nicely as modernist takes on Renaissance music. If this CD appeals, may I recommend you rewind to 2006 and hear a copy of Demos by this composer, also released by A-Musik, for a fascinating mix of orchestra, choir and electronic music.