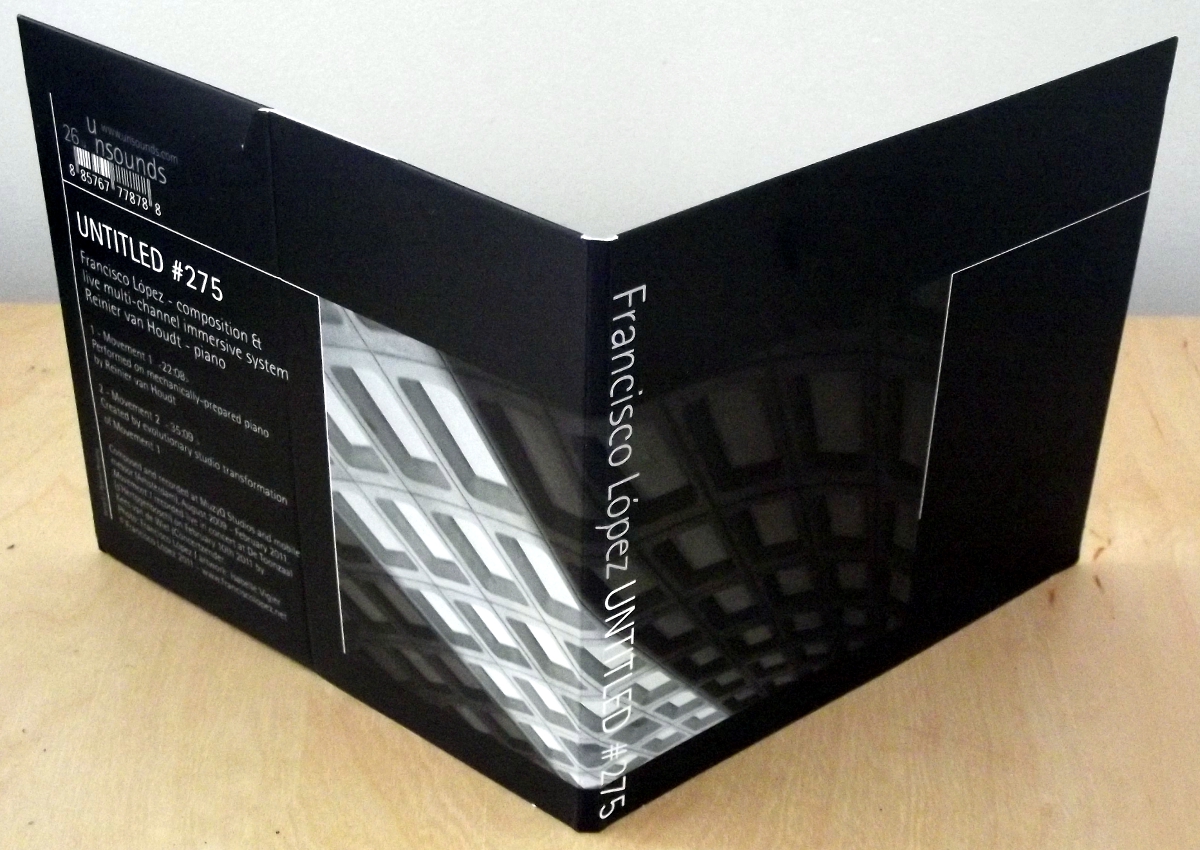 We received a generous bundle of recent releases from Gill Arnò in Brooklyn which arrived 20 December 2011, representing output from his Unframed Recordings label. Among the audio items is Nervatura / U (UNFRAMED UF/U006) released by Arnò himself, and it comprises three pieces he realised at Campo in Chicago, wrapped in a sizeable artwork which unfolds concertina-like into a frieze of thermal-sensitive images. This CDR is a second edition of an item previously released (just ten copies) as Unframed 10.e006 in 2008. The first short 6 minute piece contains identifiable field recordings rescued from the street, including what may be trolley cars or trains passing by, but somehow Arnò has managed to capture a snapshot of urban life that pushes the inhabitants right to the background, even pushing them out of the picture altogether where possible. This is followed by 11 minutes of very abstract wind-like droning sound, but if we can hear past the semi-opaque layers then the street sounds begin to reaffirm themselves, perhaps the warm chatter and clink of a crowded restaurant. It’s like riding on a subway train and being able to simultaneously see all levels of a transparent shopping mall rising above us. The droning rumble drops away and the picture of the muted crowd gradually comes into focus, soon to be overlaid with a slightly higher sound which may have been drawn from another level of the imaginary city palace, on another day completely. The long list of map grid references which follow the titles of the work start to make sense, and Arno’s compositional method is to overlay and contrast the varying timbres picked up by his sensitive microphones from these different locales. Part three stretches out for a good 19 minutes, and feels like it’s emphasising the sound of machinery and metal, perhaps the whirring of an active elevator shaft, or the collection of trashcans taking place some 500 feet away from the recording site, or a very dormant and sluggish railway yard slowly coming to life. Gill Arnò’s achievement here has been to assemble his sources into subtle yet meaningful arrangements, which communicate strong impressions of space and shape without too much heavy editorialising. There have been many attempts by field recordists to reveal the hidden face of the city, but this one succeeds without any pretensions towards mysticism or psycho-geography, and is an honest and convincing piece of work. As to the artist’s own statement of intent and methodology used, see the image from Gill’s letter.

Francisco López is one who has famously used processed field recordings of urban areas and arrived at results that are totally different to Gill Arno’s impressionistic pictures. On Untitled #275 (UNSOUNDS 26U), which we received in November 2011, López turns his craft in a more musical direction, applying a live multi-channel recording system to the prepared piano of Reinier van Houdt. On the first movement, Houdt’s piano is to the fore, and that instrument pounds out a series of quite alarming percussive minimal strokes that sonically sit halfway between machine-gun fire and the keys of an old-fashioned typewriter, said device being operated by a loopy Dadaist poet composing a vitriolic message against the petit bourgeoisie. About mid-point the piece enters a mood of dangerous seething calm, before gradually building up the tension again with carefully-orchestrated keystrokes, each one a bundle of constrained emotion – isolated notes, dissonant chord combinations, and a relentless metronome-like patter characterise this section. It’s almost a relief when this neurotic torture ends, and the remaining half of this 22-minute opus drifts away on a sea of near-silence and suffused slow chords that resemble the ghost of Satie paying a fleeting visit to the salon. If there is indeed a mechanism involved somewhere in this prepared piano set-up, it’s as though the clockwork device had run out of steam halfway through, leaving us to confront a void.

This torment is positively benign compared to the horrors of ‘Movement 2’, where López takes the above recording away in a tumbrel cart and subjects it to what he describes as “evolutionary studio treatments”. There’s a euphemism if ever there was. It’s more like a radical reconstruction of sound, occupying a nether world between composition, field recording and electro-acoustic music, and in this rather nightmarish zone each percussive bleat of the prepared piano is transformed into the clankings and groanings of an infernal machine. Even the smallest of Van Houdt’s keyboard-playing gestures has been fiendishly detoured, such that he is now pressing the buttons that operate a factory of doom, a winch of death, or a murderous metal robot. Thankfully, the violent and dramatic opening does subside eventually, and the piece mutates into a bleak, desolate world of abstract cloudery where the horizon starts to fade away and we lose our footing. Occasional forlorn piano notes, by now heavily disguised and muffled, attempt to peek through the canopy of gloom and provide some warmth, but it’s a desperate, futile action. There’s a strange beauty to be found in contemplating this washed-out environment, an activity with which we can occupy ourselves before the mechanical watch-grinding effect start to reassert itself after 20 minutes. Thereafter, it’s merely like being mashed in the gears of a gigantic clock for ten minutes, praying that we can somehow avoid being clubbed into a pulp by the chiming hammers when midnight finally strikes. López has indeed created a very “immersive” record here, it just depends if you can face being immersed in its bittersweet combinations of machine-like violence and baleful gloom.