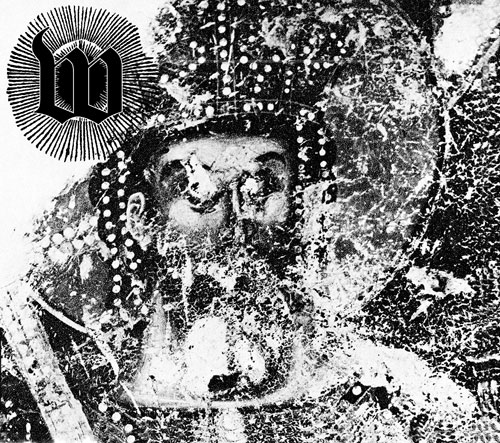 A bleak and frightening ambient black / noise soundscape that lasts nearly an hour, “Dust in our Mouths” is part of a trilogy by the Scottish duo Wraiths, earlier recordings having been “Oriflamme” (Aurora Borealis) and “The Grey Emperor” (At War With False Noise). According to the sleeve, the recording was made under a layer of gravedirt with one Wraith wielding shovel and bier and the other ghostly guy on coffin and shroud duties: one assumes there would have been a lot of banging sounds and thuds (and if the dead person suddenly awoke and sat up, why, one Wraith would promptly whack the errant upstart back into the embrace of Sheol with a resounding thump of the shovel) but instead the whole work sounds very much as if it has zoomed off into the darkest, creepiest reaches of outer space or maybe the inner spaces of a psychopathic god. Very abstract and ghostly, this is a very grim example of ambient blackened noise art that might have been composed for an imaginary film set in Ingmar Bergman territory where in a medieval setting innocent babes and those without sin die from plague and the only person left alive is perhaps a miserly moneylender who has cheated everyone in town and feels guilt that he’s been spared an agonising death while his wife and all his kids perish horribly.

For the first twenty minutes the track is not so dreary but it is very cold and sinister and the very spaces and mood within the activity are forbidding to all but the most foolhardy. After the 20th minute, the track takes a turn into very bleak territory with recordings of ocean waves that constantly wash over the tones as a regular pulsing rhythm while bass drones tremble and sharp noise squeals that might be highly distorted vocals burst through an invisible prison wall. Noise and ambient black metal elements pass in and out, there is a heavy emphasis on subterranean drone sounds in parts and shrill, harsh guitar-sounding squeals share space with clouds of vibrating tone. Overall the track resembles a meandering voyage through a series of blasted-heath sonic deserts where twilight lasts forever, chill winds can blow at hurricane speeds without warning, the ground can shake with deep moans and shifting dunes can suddenly swallow up lost travellers and disgorge their skeletons hours later.

Surprisingly Wraiths eschew the use of synthesisers and computers in creating their soundworlds, preferring instead to rely on field recordings, “re-structured equipment” and human voices to create this work in a ritual context in a cellar in Edinburgh. Don’t ask what the ritual was or you’ll invite the wrath of the demon god thus summoned. Truly this is an awesome experience to behold.