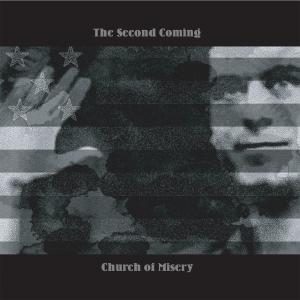 This album is a reissue by Rise Above Records in 2012 with a different, more creepy cover for a North American audience. Easy to see why RAR’s Lee Dorrian likes this happily named Japanese bunch who play melodic stoner doom metal with super-heavy, grinding bass, strong percussion, lead vocalist Hideki Fukasawa who sings with crushed rocks in his throat, and lead guitar with a range of tones that goes ’70-s retro and hard-edged raw in equal measures. The band’s choice of subject matter – on this album, a selection of notorious serial killers like Ted Bundy and Aileen Wuornos of the United States and Andrei Chikatilo from Russia – might raise a few eyebrows though there may well be a hidden message about thumbing one’s nose at authority and a controlling society that insists on turning individuals into cypher clones. Fortunately the lyrics are sung in a growling death-metal style and indecipherable to boot so they don’t interfere with listeners’ enjoyment of the music.

“I, Motherfucker (Ted Bundy)” leads with a very strong and catchy riff; if it weren’t for the title and the topic, this’d be obvious single material as is also the second track, the even bouncier groove-tastic “Soul Discharge (Mark Essex)”. Creepy samples and little snippets of news broadcasts detailing the serial murderers’ crimes pop up to add some cold chills in case the music gets you a little over-heated. The band ventures into near-ballad territory with little touches of atmospheric synthesiser on “Red Ripper Blues (Andrei Chikatilo)” – how’s that for a seriously sick sense of humour and a hilarious song title? The singing is similarly laid-back but the roaring riff-heavy music juggernaut chorus is never far away.

The band cover Cactus song “One Way … or Another”, an out-and-out rock’n’ roll song that sounds bit ’70s in melody and structure with plenty of lead guitar breaks and steely riffing. The singing sounds a little James Hetfield / Metallica-ish which suits the stern guitar sound. Go further and “Candy Man (Dean Coroll)” is rather disappointing filler in the context of otherwise stirring music.

Bonus track “For Mad Men Only (May Blitz Cover – extended version” is the real treat of this reissue: the sound and production are less polished but the minimal treatment lends a raw, hungry and energetic quality to the music and Church of Misery come over as a real bunch of hairy hippie dope-smoking rockers on motorcycles! The lyrics are shoved out of the way speedily so the lead guitar can shoot off on a cosmic trajectory and the synthesiser squeals go their own way in the stratosphere up ahead. The rhythm section maintains the time-keeping momentum with no breakouts of its own but the rollercoaster ride with the lead guitarist, the crazy singer’s yabberings and his synth-playing will be mind-blowing enough for most people.

Apart from a few tracks towards the end, this album has energy, dance-worthy riffing and melodies and inspired musicianship to spare. If you don’t know Church of Misery, this second album is the best place to introduce yourself to their particular stoner doom metal style. Melody and massive riffing with a grinding bass and rhythm are sure to trap you in the band’s evil serial-killer fantasies.